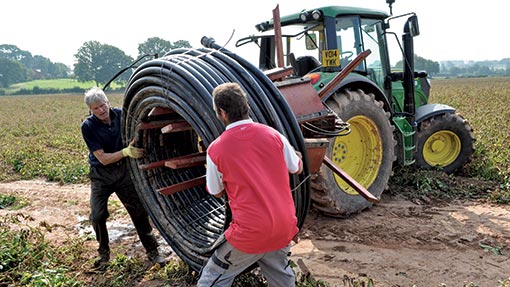 Robert Wells – who has more than 35 years’ experience in irrigation – developed and trialled his system on clients’ farms after seeing sprinkler irrigation systems in the Middle East.

“As most growers know, the cost of abstracting and applying water is huge. That hits the pocket particularly hard in years like this when crop prices are low and only quality sells,” he says.

“This sprinkler system is 90% efficient versus 70% for a rain gun,” he says. “Growers who’ve trialled it with me – including Mark Green of Ditton Farm and his farm manager Mark Tofield – estimate they’re using two-thirds of the water that would normally be applied with a rain gun in field-scale trials.

“And – importantly – it offers an opportunity to have greater control on tuber quality and potential yield,” he explains.

Any size of pump

Like rain guns, the sprinkler system uses a 100-125mm (4-5in) aluminium pipe coupled to a mains head or pump to the point of take-off.

“This gives us the ability to accommodate any size of pump with more or fewer laterals running up a field.

“Using saddles fitted to an aluminium pipe, we reel out 50mm black polythene pipe from a specially developed pipe layer/reeler fitted to a tractor.

“Once laid within the rows it is left for three days to lose its ‘memory’ before sprinklers [on metre-tall metal stands] are connected to the mains with a simple-but-effective push-in coupling. The optimal layout is to have sprinklers at 10m or 12m intervals,” explains Mr Wells. 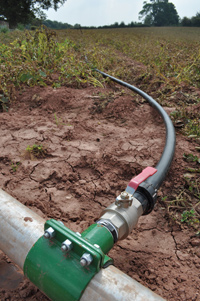 Top: Black polythene pipe is reeled out 50mm from a specially developed pipe layer/reeler fitted to a tractor. Above: Once laid within the rows, the pipe it is left for three days.

Three staff from Mr Wells’ company Wells Rain can install 11ha of sprinklers/day, with the main constraining factor being coupling up to the mains supply and pump.

“Set-up and dismantling costs work out at roughly £300/ha at each end of the season. But as the sprinklers stay in place until harvest – you can spray over the top of them – there’s none of the crop and soil damage associated with moving rain guns across a field.”

The capital cost of the equipment – £2,700/ha – is less than current widely used drip hard-wall pipework with filtration that costs about £3,700/ha, he reckons.

“A rain gun, which in my experience has more wear and tear and often requires a major overhaul every five years, works out at £550/ha as a comparison.

“Where the sprinkler system wins is its uniformity of water application. Drip pipe doesn’t have a very wide spread pattern in some soil types and cannot protect the haulm during very hot periods. 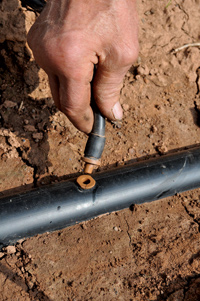 Connection to the mains is via simple push-in coupling.

“A rain gun uses a huge amount of energy to throw water in the air, only for it to lose 25% through evaporation or wind drift,” he says. “And with the huge volume being applied with each drag, you inevitably get run-off, pooling and silted-up wet patches with the crop area on many fields.”

The sprinkler system can be laid out to accommodate irregular-shaped fields, where short drag irrigation runs prove inefficient in both labour and water overshoot outside a cropped area, he adds.

There is growing evidence from Potato Council research that an even application of water has significant benefits on both crop yield and tuber quality, he says.

“In trials there’s a potential 20% increase in yield from optimising water availability in sandy soils as an example. Growers also have the opportunity to suppress some crop disease risk by avoiding the plant and tuber stress associated with drought.”

The key to the sprinkler system has been the development of the layer/reeler unit. Using a hydraulic drive, pipe is fed on to a ring of collapsible arms that form the shape of a drum. The 50mm pipework is wound around this, using a spool valve to control rotation speed and feeder arm position.

Each run of 200-300m of pipe is tied off and, with the internal arms withdrawn, can be slipped off the drum to be stacked on a farm trailer for transport to store.

“It has taken three years to develop it this far,” he says. “In the Middle East water is a very precious resource and the sprinkler systems are used on a diverse range of crops, not just potatoes.

“Although we’re running systems here in Herefordshire on 50mm pipe, I’m working on systems for 63mm and 70mm bores to reduce the friction of water passing through pipework for growers in eastern counties, where longer pipe runs are the norm.”