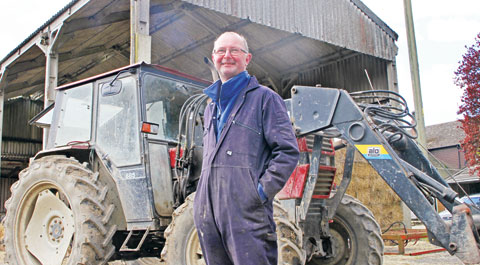 According to contractor Simon Chiles, direct drilling – planting seed into uncultivated ground – is poised to be increasingly adopted by UK farmers.

“When cereal prices were low it heralded the introduction of min-till crop establishment and now that fuel and machinery costs have spiralled upwards I think more and more growers will be looking seriously at direct drilling,” he says.

“It’s a system which works in most conditions and when established, does not impact on yield. It also cuts down on the need for big tractors and implements, and reduces fuel and labour costs.”

Mr Chiles runs his contracting business from his base near Edenbridge, Kent and, among his other operations, offers a direct drilling service using a 4m John Deere 750A drill.

“Over the years I have direct drilled most crop types grown in the UK including beans, cereals, linseed and even soya,” he says. “And, without fail, they have all grown well and produced the yields expected.”

All of which, if true, begs the question why direct drilling is not more widely used – as it is in so many other parts of the world. 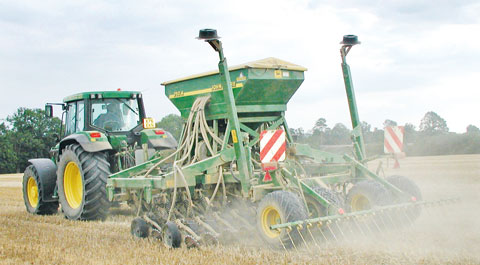 Simon Chiles’ 4m John Deere 750A direct drill for which he charges about £50/ha.

Mr Chiles believes the reason is partly due to a reluctance for farmers to change from traditional methods. It may also be due to the lack of interest by machinery manufacturers who could suffer a dramatic fall in business should direct drilling become more universally adopted.

“Farmers tend to be traditionalists,” he says. “And it is only when they are really up against it they make changes. Having said that, I really believe there is now a generation of growers who are seriously looking at ways of reducing costs – and direct drilling can offer them the solution.”

This message is not lost on his customers, several of whom are now fully committed to having their crops direct drilled.

Typical, perhaps, is Tony Wilkins who runs his 60ha (150 acres) at Limpsfield, on the Kent/Surrey border.

“We started direct drilling 11 years ago in 2001 – the year before was the last time the plough was used,” he says. “And I have to say it was one of my better decisions.”

“With what is a relatively small arable area it was becoming increasingly difficult to justify the investment in cultivation equipment – ploughs, power harrows and so on,” he says. “And to have it cultivated and drilled by a contractor was not really an option either – our acreage, I suspect, was not going to attract a particularly timely service.

“So, having spoken to Simon Chiles and a few of his customers, I decided to give direct drilling a try.”

The first year, he reports, was something of an education – coming to terms with the fact that the ground was not going to be ploughed or cultivated; it was just going to be left to green up, sprayed off and then drilled.

“This was one of the most taxing parts of it,” he says. “Instead of working all hours ploughing and preparing seed-beds it was a period when there was very little to do. It was such a break with tradition.”

But all this was soon forgotten when, in September, Simon turned up with his John Deere direct drill and managed to drill the whole farm in a day – the 4m drill with its disc coulters placing the seed in 17cm spacing and Guttler wheels pressing and ensuring good seed/soil contact.

“We had been told to expect a fall in yields in the first couple of years but either our yields were already as low as they could go or we were lucky because our 2.5t/acre average remained unchanged,” he says.

As the years went by Mr Wilkins noticed a marked improvement in the soil’s condition which was no longer being mauled about by heavy tractors and cultivators. It became more friable, drainage improved and the worm population increased.

“The crops looked better and the yields started to climb,” he explains. “Last year we averaged just over 3t/acre and, while this is down to the improved soil conditions, it is also because our timings of herbicide and fertiliser application are now so much better.” 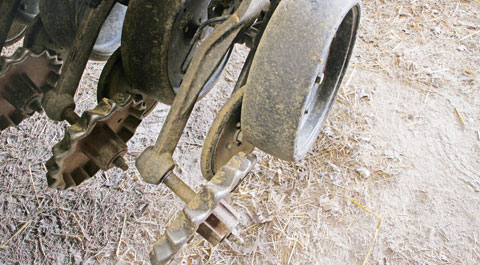 Now more of a routine, the fields are harvested and the straw baled and removed. After a few weeks, the fields are then sprayed off with glyphosate and direct drilled. Depending on conditions, there may be a dressing of slug pellets as a precaution but for even these pests Mr Wilkins believes there are now more natural predators doing the control work for him.

“Looking back it now all seems so blatantly obvious that direct drilling was the route to take,” he says. “The soil is now working with us and we no longer spend a fortune trying to battle it into submission each year. All the soil bugs are in the right place and there now seems to be more of a natural balance to the job.

“And the bottom line is that our establishment costs are now so much lower – the charge for drilling is £20/acre which blows ploughing and min-till out of the water.”