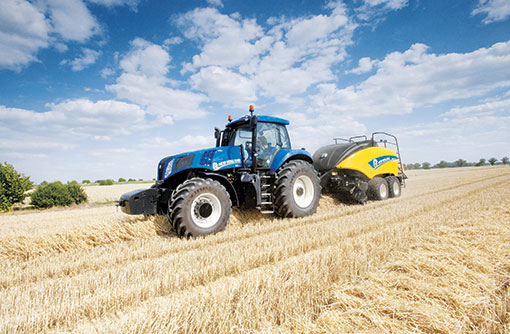 When Fendt unveiled the first practical continuously variable transmission, it did more than just bring a new level of speed control and adjustment. It brought the engine and transmission together to perform as an integrated unit.

Prior to this CVT development, it was entirely down to the operator to choose the combination of engine speed (bearing in mind the engine’s power and torque characteristics) and gear ratio that best suited the job in hand.

With the introduction of CVT, the driver’s judgement was taken over by microprocessors – he could choose one of several operating modes to suit road travel, heavy draft work or consistent pto or ground speed, and set certain engine speed parameters where appropriate.

But, thereafter, it was the tractor’s “brain” that set and adjusted engine revs and transmission ratio to the optimum settings for every circumstance.

The benefits are clear to see: the perfect speed for every job for optimum output and/or quality of work; improved ride comfort as the tractor speeds up and slows down seamlessly with no powershift jerks or snatched manual gear changes.

A less tiring job for the driver, too, who no longer has to think about timely gear shifts; and improved fuel efficiency thanks to a system that can drop engine revs while maintaining the required forward speed.

But just as manufacturers bring out more stepless drive options, powershift transmission development is eating into some aspects of the CVT’s appeal.

Multi-role JCB Fastrac 4000 Series will have an Agco Variable Transmission when it enters service later next year.

To maintain a given forward speed – when sowing, for example – GSM will drop down a ratio or two and increase engine speed if necessary to get more power to climb a hill. It will also down-shift automatically to provide engine braking when it detects the tractor is heading down hill on the road with a heavy trailed load behind.

A similar control system will feature on the new e23 transmission destined to become available on John Deere 7R and 8R tractors late next year. Draft load permitting, Efficiency Manager will automatically shift up and throttle back to save fuel while maintaining a set ground speed.

There are 14 ratios (out of 23 forward speeds in total) between 2.5 and 16kph and the driver can select one of three operating modes to suit different applications – another familiar aspect of CVT  transmissions.

In truth, although these powershift transmissions get closer to a stepless drive system, CVT still wins out for ultimate speed flexibility and efficient control. Little wonder, then, that more tractors are about to get this technology.

Fendt has successfully pinned its colours to the CVT mast with Vario-equipped transmissions featuring exclusively in all its tractors from the 240-390hp 900 series via the new 125-165hp 500 series to the 300 series covering 95-135hp territory.

JCB Agriculture is following the trend, with the Agco Variable Transmission already featuring in the top-end Fastrac 8000 series tractors and in the newly unveiled 4000 series, where three models will span 160-240hp.

Stepless drive is considered the ideal solution for a tractor designed to be as versatile as possible, packing more sophisticated hydraulic suspension, better manoeuvrability and an all-new more spacious cabin.

Elsewhere, though, stepless drive is being brought in as an alternative to established semi-powershift transmissions.

New Holland has revealed the Auto Command version of its T8 Series tractor, which not only brings CVT versatility, but also a further extension – by 50mm – of a wheelbase that is already longer than competitor machines. Stability and traction are claimed to improve as a result.

There is added power, too: at 404hp for draft work and 419hp for pto/transport, the New Holland T8.420 Auto Command is more powerful than the biggest version with Ultra Command powershift.

McCormick X7 Series tractor will have Pro Drive semi-powershift gearboxes initially, but will get a VT Drive stepless option next year as Argo’s first CVT product.

Case IH matches that, of course, in the shape of the Magnum 370 CVX while also adding CVT flexibility to the Maxxum range at the other end of the size and power scale.

Only four-cylinder engined versions have the CNH-built transmission option, covering power outputs from 121-143hp for draft work and 143-163hp for transport and mobile pto activity.

Having previously offered CMatic stepless transmissions from ZF in the high-end Xerion up to 530hp and the mid-range 180-246hp Axion 800 tractors, Claas is adopting the technology more widely.

The second-generation Axion 800 CMatic will have one of ZF’s Terramatic CVTs – a development of the Eccom – when it goes into production next year. It will be an alternative to the long-serving Hexashift semi-powershift transmission, but the new Axion 900 range with outputs of 320-410hp will be CVT (by ZF) only.

Further down the range, the new 145-184hp Arion 500 four-cylinder and 600 series six-cylinder tractors will come with a Claas transmission that in concept is closer to the Agco Variable Transmission (aka Fendt Vario) than the more common four-step CVTs.

While Vario has a two-speed manual shift gearbox to provide ratios for field and road work, the Claas EQ200 has auto shifting between two ranges and wide-angle Danfoss hydrostatic units for speed variation within each range.

The “intelligent interconnection” between the mechanical transmission and the hydrostatic components is a key element of the compact design, says Claas, with the hydrostatic units working alternately as pump and motor.

It is too early for Agco Tractors to reveal the nature of its first in-house stepless transmission, which should appear towards the end of 2014 in new mid-range Landini series 6C tractors from 111hp to 143hp, and their McCormick X6 series equivalents.

A trio of four-cylinder Case IH Maxxum tractors are now available in CVX form with a stepless transmission.

But the Italian manufacturer should have another range of CVT tractors in the field by then, providing an alternative to the ZF-sourced 24×24 or 40×40 creep semi-powershift that features in the all-new McCormick X7 series.

This range, using four- and six-cylinder engines to provide 143-188hp draft work outputs and up to 212hp for pto/transport applications, replaces the X70 and its predecessor XTX/TTX series and also features new hydraulics and the Premiere cab where there are now modern electronic controls.

The VT Drive stepless versions coming later will use the multi-control joystick to operate ZF’s new Terramatic transmission, with the usual mix of driving modes available to suit different tasks so that the 0-50kph CVT and FPT diesel engines work in harmony for fuel-efficient but also productive  operation.

More CVT options are also on their way in the Deutz-Fahr range, including a 127hp TTV addition to the new series 5 line-up to join eight models of Agrotron Series 6/7 tractors from 149/153hp to 238/263hp.

Further down the line, two more ranges, as unveiled at Agritechnica, are planned: a four-model Series 9 TTV range with 270-340hp outputs and three Series 11 TTV tractors reaching a heady 440hp from their Deutz engines.

All will feature ZF Terramatic stepless drive as the CVT revolution rolls on.