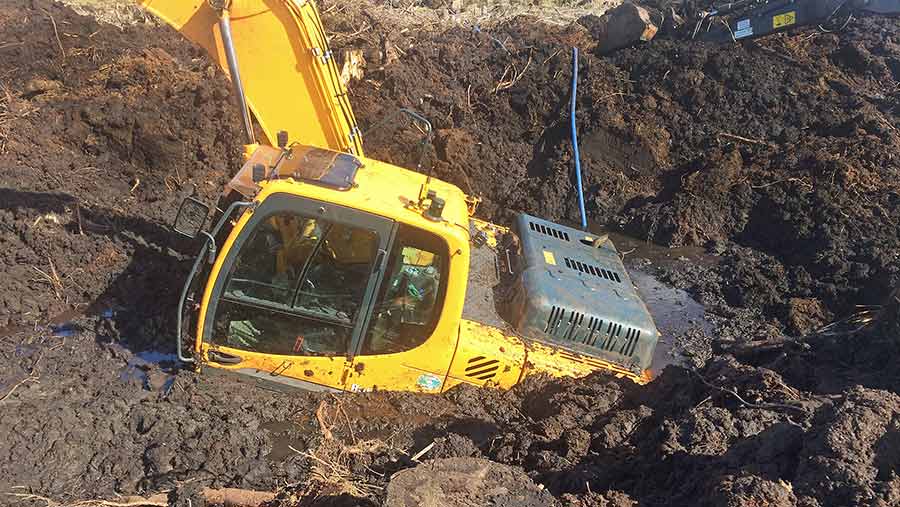 Away from his day job as a regular farmer running 600 ewes near Dunscore, Dumfries, Keith Harvey has geared himself up as a specialist debogger.

The job involves salvaging machines in a pickle, whether they be combines down to their axles, fully submerged forestry kit or tractors that have tumbled down a dangerously steep slope.

Mr Harvey runs a motley fleet of ready-to-work vintage tractors, crawlers and diggers adapted to operate on boggy land that has a habit of sucking in expensive kit.

And with monster 35t logging harvesters now prowling forests originally planted on pretty rough post-war ground when horses were a common haulage tool, it’s no surprise that the peat continues to take plenty of heavy-metal prisoners.

Here, he gives us the lowdown on his debogging service.

What basic kit do you carry?

Straps are far lighter than chains and hold low potential energy when under strain, so are far safer – if a link snaps on a chain then it shoots off like a bullet.

I also have plenty of snatch blocks that we use to double the strength of the winch. Sometimes we run the rope around two or three of them to crank the pulling capacity up – with plenty of suitable anchors, we can achieve up to 12x the winch pull.

A decent winch and rope is essential, too. It’s getting hard to buy the old winches now though – my weapons of choice are ex-military Boughton-made kits but a decent outfit has trebled in price over recent years.

For peat bog recovery, the other essential is bog mats. They’re not cheap – decent hardwood ones (1m x 5m) are often £1,000 apiece – but if you don’t mind skimping on quality then you will probably find them for £250.

We’re currently looking at making some seam-welded steel mats that should last a bit longer. 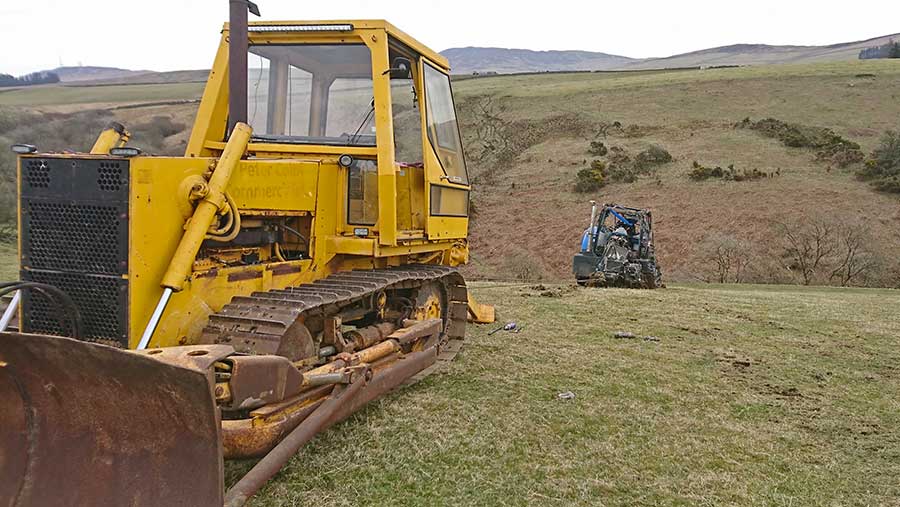 What machines do you use?

We’ve got a big fleet, including metal-tracked crawlers that are good on fields but would probably throw a track off climbing over forestry stumps, and lighter-weight Countys that work well on more awkward terrain.

My go-to machine for heavy work is a 1980s Moxy dump truck that I converted for recovery jobs, though at the time I never thought I would use it. It was cheap to buy and is so basic that a hammer and set of spanners will sort out most mechanical problems. 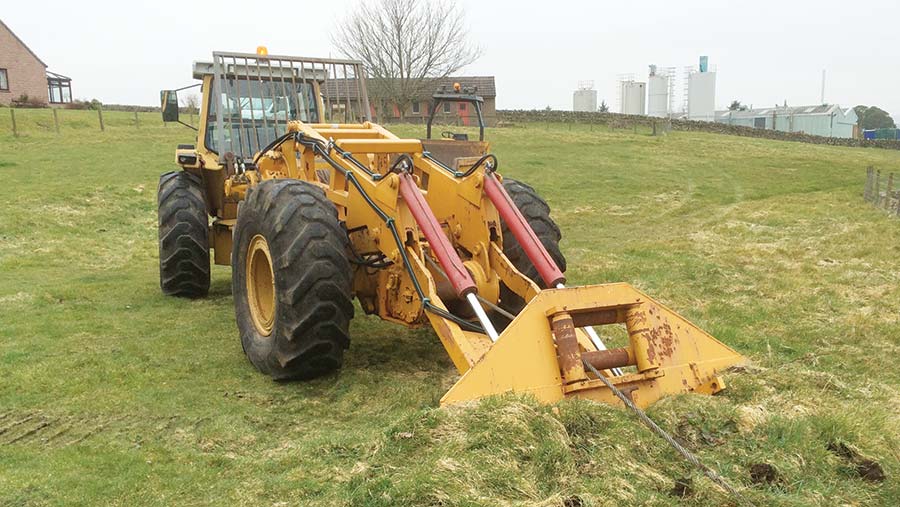 Most sunk machines can be salvaged with a 12t Boughton 2H winch kit that mounts to any three-point linkage. It runs off the hydraulics of my New Holland T6 and carries 100m of 19mm-thick rope.

The spade part is a 1.8m forwarder blade from a Valmet 860, though I added extra spikes as the blade struggled to bite into the subsoil.

This is the ideal tool for forestry jobs that involve climbing over lots of stumps. I’ve made an alternative carriage for a 20t 360 digger that carries a 30t winch and a 12t carriage for a 13t machine.

The whole lot can spin around, so the blade section can be used in reverse to drag the digger across bogs and then swivelled forwards to act as an anchor ready to pull against.

It carries 60m of 25mm rope (which cost about £1,000). I’ve also adapted a 9t hydraulic winch and blade that can be carried by my 4t excavator for lightweight recovery jobs.

A pair of metal-tracked crawlers provide the weight and power for heavy hauls, but aren’t agile enough for bogs. One is a 36t Terex 8230 that regularly gets fired up just to hear the V8 Detroit engine.

I haven’t fully rigged it up yet, but it will carry a 60t-pull Hyster W12E winch (the largest setup for heavy dozers), which alone weighs 4t. Its narrow tracks shouldn’t be a problem as I have almost a mile of rope.

Three County tractors include a Super 6 with permanent 12t winch, a forestry-spec, dualed-up 774 and an ex-utilities 1174.

How much does recovery cost?

Most guys work on an hourly rate. It roughly works out at £10/t of pulling capacity, so depends on the amount of hardware required. 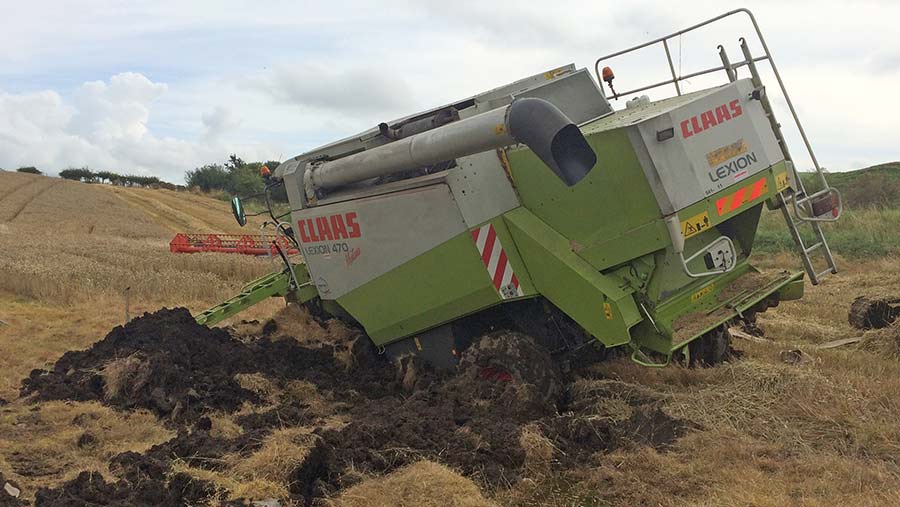 For most tractors and combines, the best thing to do is pull it out from the direction that it went in, by strapping either to the chassis or to the towing eye. The key is to keep the pull straight – I’ve heard of tractors snapping in two at the bell housing if they are yanked from an angle.

When winching, the pulling end needs a decent anchor point. We have enough rope to look for anchor points up to half a mile away. Trees can be useful, but those growing in peat have no root base – they simply sit on the surface.

Once, we used a huge fir tree with a 5ft diameter trunk, but the whole tree moved sideways by several metres while still standing bolt upright once we started to pull.

It’s also important to keep the wheels or tracks of the bogged machine moving at the same speed as the winch wire. Typically, it’s about 10m/minute on a straight-line pull.

However, using snatch blocks will double the pulling strength but halve the speed of the wire. A 30t line-pull winch can be cranked up to 120t pull at the sunk machine by using a couple of heavy-duty snatch blocks.

The reduction in speed is so big that it’s sometimes barely possible to see the machine moving, but the power at the towing point is immense.

What about broken-down machines?

Most diggers and forestry harvesters are hydraulically driven and things get very hard work if it can’t help itself out of the hole.

Yanking a 35t deadweight harvester is a serious job, especially if it’s hung up on a rack of stumps. The strain has been known to collapse all the bearings in a 15t-rated snatch block that has a safety factor of 60t.

Have you ever had to give up on one?

Not yet, though I have been up to my waist in mud plenty of times. Communication between the winch operator and men on the ground is vital for the job to run smoothly.

We’re hoping to turn unusual recovery jobs into a charitable event with lots of people turning up to see rescue attempts and, with any luck, we’ll raise some cash in the process.

What would be the ultimate recovery vehicle?

No one makes an off-the-shelf recovery machine but I think excavators are ideal because of their heavy construction, high hydraulic oil flow and ability to get over most terrain. They can also help with bog mat placement and moving other material.

There are some tracked alternatives, such as the Marooka carriers that are often used to lay really deep pipe in gnarly conditions. They’re seriously expensive, though.

There’s also the T-winch Traction Assist, which is basically a 160hp cab-less crawler that forestry companies use to provide an anchor and winch on steep slopes. However, they have a sub-10t pull and, including 500m of 25mm rope, cost about £100,000. 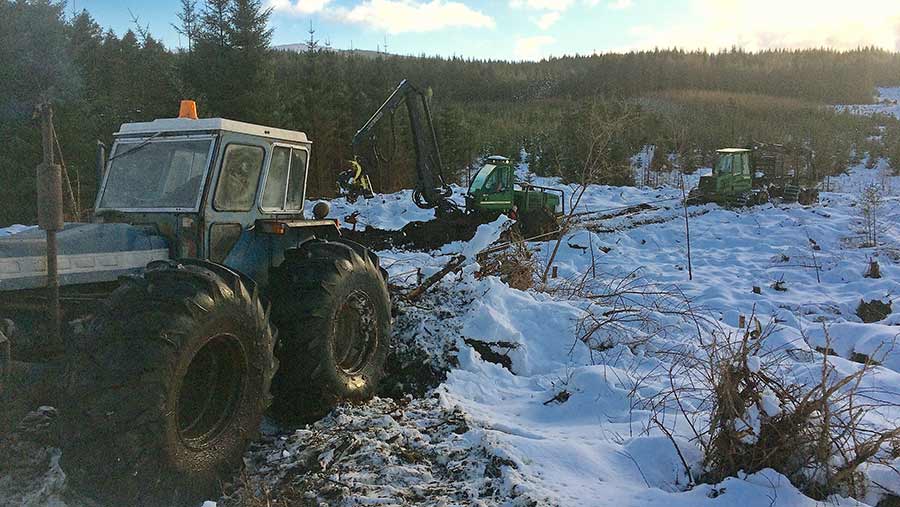 What’s in Your Shed? 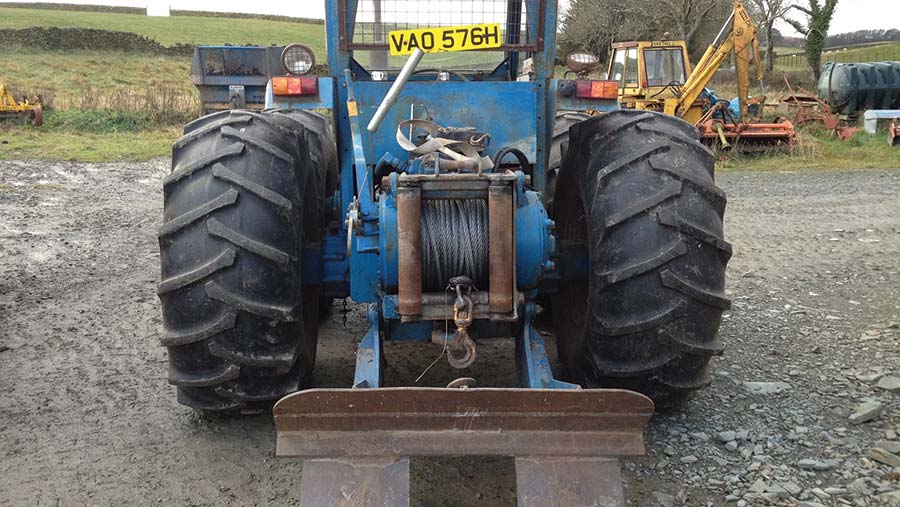