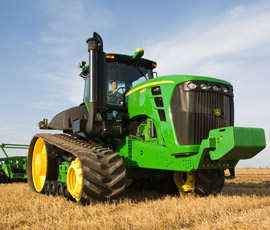 John Deere has announced how it plans to meet the final stage of emissions regulations – Stage 4. The tightening regulations require a further 80% reduction in nitrogen oxides from current levels, which Deere says it will achieve with the introduction of the urea-based selective catalytic reduction (SCR) exhaust gas treatment.

The new system will be introduced first on tractors above 174hp in 2014 (and smaller machines in 2016). It heralds Deere’s first foray into dual-fuel systems, and the manufacturer says the combination of SCR and EGR will use a lower quantity of AdBlue than other engines.

*The 9630T (pictured) does not have the dual-fuel system