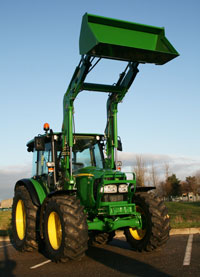 John Deere’s new 5R Series tractors, unveiled at the Italian EIMA show and due to be at LAMMA on 21/22 January, will inherit some of the features of their larger 6000 Series cousins.

Powered by a Tier III 4.5-litre two-valve PowerTech engine and available in 80, 90 and 100hp models, they gain the 16/16 PowrQuad Plus transmission rather than the standard PowrQuad fitted as standard on the outgoing 5020 series tractors.

This has a declutch button on the shift stick, which momentarily dips the throttle for smoother shifts between gears. AutoQuad Plus, which allows the user to preselect transmission shift points, is another option adopted from higher-horsepower tractors in the JD range.

Power has also been increased by 7% overall, says Deere, with a constant power range and more start-up torque. The chassis has been strengthened to cope with the extra power, giving a 20% higher payload of 6.2t, and a larger hydraulic pump means lift capacity has increased to 4300kg.

Climb inside and you’ll notice a new console layout that has much in common with the 6000. New, brighter colours give it a fresher look, says the company, and things like a B-post display and dual-gauge dashboard have been integrated. Plus the PTO control has been moved to a more logical position on the dash.