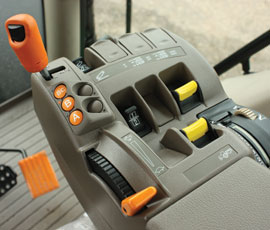 It’s not often that a wholly new tractor transmission comes along, but last week John Deere announced just that.

It’s called Direct Drive and updates a concept that was invented several decades ago. More recently it was taken on by Audi in its dual-clutch transmission and by Formula One cars needing to change gear with lightning speed.

At its heart are two main shaft drives, one with gears 1, 3, 5 and 7 on it and the other with gears 2, 4, 6 and 8. Each shaft has its own clutch and one of the two clutches is always engaged. There are three ranges, giving a total of 24 forward speeds.

When the driver changes gear, one of the clutches disengages as the other engages in parallel. The actual shifting is carried out by electromagnetic actuators, which do their job breathtakingly quickly. But the key thing is that there’s no interruption to the flow of power, says Deere, hence the speedy and smooth changes.

There are three frame sizes (with 2.58m, 2.76m and 2.8m wheelbases) and both four- and six-cylinder engines. EcoShift mode pegs back revs at 40kph to keep things tranquil in the cab and four-cylinder models get an 80 litres/min hydraulics system.

What’s the benefit for farmers? Gear changes should be almost as smooth as a CVT for less cost, says Deere, and the simplicity of the system should give a 4% cut in fuel consumption.

In the cab, the driver gets a stubby orange lever, which can be slotted into either auto or powershift mode. Auto works pretty much like a CVT transmission (without the power losses), matching the speed and engine rpm to give the best fuel efficiency. It also automatically works across the three ranges.

Manual mode, on the other hand, allows you to nudge the lever forward and back like a powershift.

Range A gives speeds between 2.7kph and 10.8kph, range B provides speeds between 5.4kph and 21.5kph and range C gives transport speeds from 13.8kph to 42kph (or 54.6kph as an option). B/C allows auto-shifting between the two.

The transmission will be available on Deere’s new six-cylinder 6R Series tractors, which go from the 140hp 6140R to the 210hp 6210R. Cost is £5,517 more than the powershift equivalent but £1,500 less than the equivalent CVT option.

Watch a video of how the transmission works