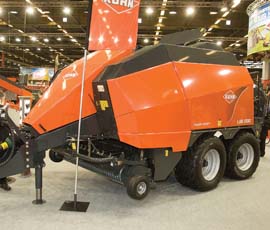 John Deere could soon be making big square balers for the first time. It has struck a staged deal with French machinery giant Kuhn to first sell the latter’s balers under its own colours in Europe in 2012. However, the second part of the plan is that it will start making balers based on the Kuhn design in the US in 2014.

Kuhn itself acquired the baler technology when it bought Vicon’s baler Geldrop factory in the Netherlands at the end of 2008.

This isn’t the first time Deere has sold big square balers made by other companies. It used to sell Krone-made balers in the 1990s.