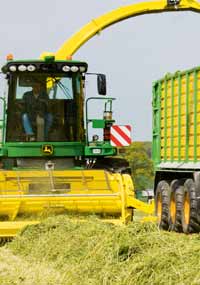 Agritechnica is set to be a busy show for John Deere, with two new ranges of tractors, a new forager and much else besides. Emily Padfield reports on the highlights.

John Deere’s new 8R and 8RT Series tractors, which replace the current 8030 range of tractors, have broken cover in Germany. They have more horsepower, a new cab and, in the case of the tracked machine, a whole new undercarriage.

Favoured by large-scale farmers and contractors, the existing 8030 series ranged from 225 to 330 hp. The new models keep the same 9-litre four-valve common-rail Deere PowerTech Plus engine but get a 10% power increase, resulting in 15-20hp more. 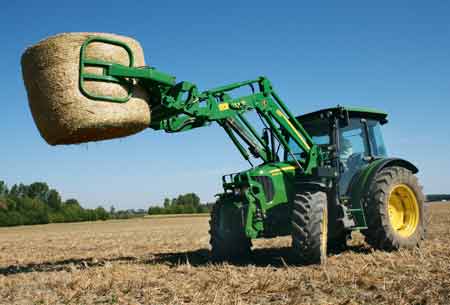 Factor in the power boost from what Deere calls the Intelligent Power Management system and this jumps by a further 35hp. But despite the increase in hp, both 8R and 8RT tractor match the 8030 Series on fuel efficiency, claims the company.

The 8RT tracked machines are new from the ground up and bear more than a passing resemblance to the 9000 Series. Each track now has one air cushion bag and one track tension accumulator, rather than the two on the 9030T.

Wheelbase has been lengthened by 254mm (10in) to give better power-to-ground transfer and the new 8RT models use the same front idlers as its larger siblings, too. Instead of the outboard planetary drives on the older models, inboard drives now allow for easier tread spacing and adjustment.

Wide drive wheels come as standard on UK models and the tracks now have modified lug pitches to give better traction in wet conditions. The 8RT models also gain a 54% bigger fuel tank.

Both 8R and 8RT Series tractors can be equipped with 16/5 automatic powershift transmission or AutoPowr CVT, each increasing transport speed to 42kph.

The most significant change on the 8R Series besides the extra power is probably the CommandView II cab.

The controls formerly housed on the right-hand console have now migrated to a neat panel on the side of a compact armrest, which Deere refers to as a redesigned CommandArm.


A 7in colour display nestles tidily at the end of the armrest, giving the driver several ways of altering a particular function, including hydraulics, hitch controls, transmission settings and drive options, as well for lights and radio controls.

Shortcut keys on the arm also now mean you don’t have to scroll through dozens of options to turn off the flashing beacon.

Deere is steadily moving away from the 1970s-style brown interior, adopting the charcoal grey of newer models like the 5R Series. It says the cab is 10% bigger and has four times the storage space of previous models.

All models come AutoTrac-ready for syncing with Deere’s range of auto guidance options.

Hot on the heels of the launch of the premium 5R Series earlier last year, Deere also showed three ranges of utility tractors ranging from 55hp to 100hp.

The Mannheim-built 5M Series is lower spec than the 5R, with four models from 70 to 100hp. Each has the same 4.5litre PowerTech engine as the 5R, with a mechanical fuel injection system, charge air cooler and turbocharger.

Three 40kph transmission options are available, the 32/16 Power Reverser with clutchless shifting, a basic 16/16 Power Reverser and 16/16 Sync Reverser. All 5M tractors have a wet clutch and a choice of either 74 litres/min or 94 litres/min hydraulics to cope with the loader work they will most likely be faced with.

The Italian-built 5G Series is a direct replacement for the 5015 range and is available in standard, high clearance, vineyard and fruit options from 80 to 100hp. Again fitted with the 4.5-litre PowerTech engine, transmission options include 12/12 30kph, 24/24 40kph with mechanical HiLo and electrically shiftable versions.

The Indian-built 5E range of three cabless tractors range from 55-75hp and have a lift capacity of 1.8t. Shift on the move through a syncronised 9/3 inline transmission is coupled with independent hydraulic pumps for steering and applications, amounting to 71litres/min.

A new flagship heads up John Deere’s forager range. The massive 812hp 7950i high-capacity machine is capable of harvesting up to 300t of maize an hour. That’s a trailer-load every two minutes.

With new header options, the 7950i features a longer chassis and a stronger rear axle. A new, heavy duty final drive gives 23% more header lift capacity and the transmission has been beefed up to match the increase in power.

The kernel processor now has a four-rib drive belt as standard and a stronger variable length of cut transmission with smooth reverse shifting as standard.

All crop channel components now have, as an option, hard-facing which Deere says will have four times the standard lifetime. These can also be retrofitted to smaller models from your dealer.

Three engine management settings are now standard. Road Mode is active between 1250 and 2100rpm and provides extra torque during transport, but at junctions reduces engine speed to a minimum.

Field Mode 1 saves fuel on headlands by reducing engine speed once the header has been picked up and ramping it back up when it’s put back into work. Field Work 2 adjusts forward speed to maintain constant engine load during cutting.