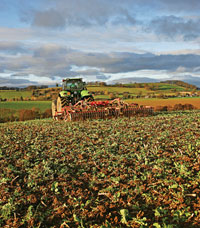 Trying a new tractor brand has brought some significant benefits for a Gloucestershire grower who is striving to become greener and cleaner.

Right on the border between Herefordshire and Gloucestershire, potato and arable farmer Reg Watkins was faced with a difficult choice when his local dealer switched brands three years ago.

Should he stick with his preferred tractor – Fendt – and move to a different dealer or was he better off to try out Deutz-Fahr and retain the excellent service and back-up from local dealer Pallisers?

“The choice wasn’t really that difficult in the end. David Palliser has been so good to us over the years and we didn’t know what sort of service we’d be getting from the new Fendt dealer,” says Mr Watkins.

“We’d also been finding that with our drivers jumping on and off different machines, we just weren’t making the most of the increasing technical sophistication of the Fendts, we needed something more simple.”

And in early 2006 it arrived – a brand new Deutz Agrotron 265. Its Deutz engine had already proved itself in the farm’s Fendts and with its ZF six-speed manual gearbox and four-step powershift, Mr Watkins saw it as a good, straightforward workhorse.

“We priced up an equivalent Fendt, but it was £35,000 more expensive there was no way we could justify spending that on a machine that would essentially do the same job.”

Over the course of a year the 265 clocked up 1450 hours and proved itself a reliable performer with just one weakness.

“All our tractors are expected to muck in with whatever jobs we’ve got on at the time, whether it’s fieldwork or haulage,” says Mr Watkins.

“The big Deutz was fantastic for cultivations, but after a while it became apparent that it wasn’t a haulage machine, its brakes just weren’t man enough.” 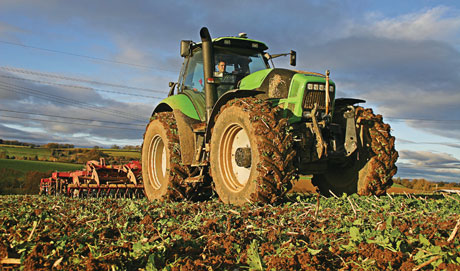 “The Deutz can be as simple or complicated as you like. With its straightforward six-speed mechanical gearbox, it’s got awesome pulling power and is dead easy to operate, no matter who’s driving it,” says Reg Watkins

So in early 2008 the decision was taken to replace the tractor with Deutz’s new flagship, the 250hp X720. Its multi-plate brakes had beefier pistons, which had significantly improved performance, says the German manufacturer.

Immediately on arrival at Stone House Farm it was put to work ridging up potato baulks with a three-row ridger and occasionally stepping in with the three-row bed-tiller when the farm’s Fendt 930 was required for other tasks.

“The combination of the Deutz’s big six-cylinder engine and the ZF mechanical transmission make it a fantastic lugger,” says Mr Watkins.

“For bed-tilling we found it was actually using less diesel than the 930, even with Fendt’s clever TMS tractor management system, which had previously saved us a vast amount of fuel.”

Athough the X720 might lack the same level of computer control, Mr Watkins believes it makes for a more versatile tractor.

“The Deutz can be as simple or complicated as you like. It’s got all the gadgets like headland management control, but you don’t have to use them to get the most out of the tractor.

“It’s in the same bracket as our old favourite – the Case IH1455. It’s a good, straightforward lugging tractor.”

Working in partnership with his brother Graham, Reg farms a total of 600ha (1500 acres). No strict rotation is used, but this last year the largest portion was a 240ha (600-acre) block of oilseed rape with the remaining 365ha (900 acres) split almost equally between potatoes and winter wheat.

“As a large proportion of our business comes from the sale of spuds to supermarkets we have to be environmentally aware,” says Mr Watkins.

“So two years ago we set up a biodiesel plant converting used chip fat into fuel.”

“Running mineral diesel in our irrigation pumps was a potential environmental risk with the possibility of spillages or vandalism. Using biodegradable biodiesel overcame that risk.

“Also, by fuelling our forklifts on it we’ve cut the amount of nitrous oxides they pump out, so the atmosphere in our grading sheds and stores is a lot more people-friendly.”

But collecting and buying in waste cooking oil in large volumes became a hassle and meant there was a lot of wastage from contaminants. To overcome this, the Watkins brothers bought two oilseed presses from China and installed them in an old cattle shed.

After a bit of tweaking they now turn out clean rape oil to run through the farm’s biodiesel plant. But the cost of this process still makes it prohibitive as a replacement for red diesel.

However, all that is set to change with the imminent arrival of one of Deutz’s new Natural Power Agrotron M-series tractors. Its engine has been modified by the German firm to run on crude, unprocessed rape oil. The first one into the UK is due on trial at Stone House Farm early in 2009.

“We’re looking at replacements for some of our mid-range Fendts and will almost certainly be looking at Deutz-Fahrs.

“We’re hoping to try out an Agrotron TTV with its stepless box for our two Grimme spud harvesters. If we can get one that will run on straight veg oil, that will be fantastic. We’ll be able to prove to our supermarket customers we’re taking steps towards cleaner, greener farming.”