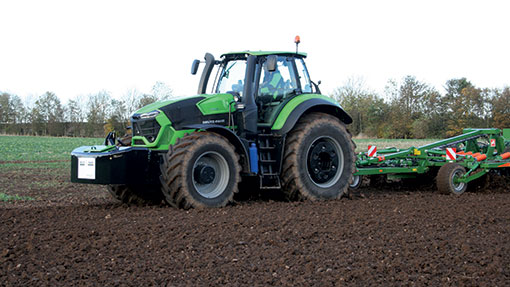 A new contender in the high-horsepower tractor class took to the field this week as SDF presented its most comprehensive Deutz-Fahr tractor line-up to dealers and potential customers.

The company also revealed plans for a €1m, five-year plan to increase sales and market share in the UK and Ireland.

“Despite efforts over the past 10 years, our market share is still below 3% when the product deserves 7-8%,” says Rob Howles, commercial manager. “That’s a realistic target – but to achieve it we need to fill many gaps in our dealer network, improve their product knowledge and business practice, further strengthen the Deutz-Fahr image, and ensure our products represent good value.”

The process was kicked off this week with the working demo launch of the new flagship 270-336hp 9-series TTV tractor, two six-cylinder additions and the new Comfort Shift transmission for the Agrotron 6-series, as well as new versions of the small Agroplus and Agrofarm tractors.

The 9-series is powered by a 7.8-litre Deutz with twin turbos, which Deutz reckons will improve the torque at either end of the rev range to make the most of the CVT transmission.

Drivers get the same MaxiVision cab as fitted to the 200-263hp 7-series but with improved air suspension and controls for the front linkage built into the seat console and joystick.

The flagship tractor’s neatest party trick is a powered hood that lifts clear of the engine on parallel linkage at the press of a button.

A new addition to the Deutz-Fahr Agrotron 6-series goes against the trend of phasing out six-cylinder engines below 150hp. The 6140 has a 6.0-litre Deutz in a four-cylinder package delivering 135hp and up to 144hp with “boost”.

The 6120 has a straight 210hp from the same engine and can be had with a Comfort Shift and electronic spool valves package that ditches the gear lever in favour of button shifting between the six ranges of the 24×24 or 40×40 creep transmission.

The Agrotron 6-series from the 153hp four-cylinder 6150.4 upwards is also available with a revamped armrest console and a new instrument cowling with more air outlets for improved ventilation.

Engine apart, the 75-99hp 5D and 89-109hp 5G sport a wider four-post cab with added refinement to provide the driver with a more comfortable place of work.