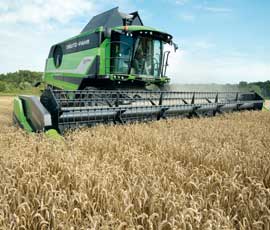 Combines may still be still soldiering on, but makers are already busy bringing out next season’s machines. James Andrews reports on Deutz Fahr’s latest offering

Big, fancy rotary combines have a habbit of hogging the limelight, yet there are plenty of farmers out there that hanker after the simplicity of a traditional straw-walker machine.

Hence the launch of Deutz Fahr’s new flagship range of walker combines. The C9000-series will form a new premium class of combine for Deutz that the maker hopes will steal some market share from the likes of Claas, New Holland and Deere.

At a glance, the differences between these and the current flagship 60-series combines are clear. Header width on the 6-walker version has shot up from 7.2m to 9m and the whole thing has been wrapped in stylish metalwork crafted by Italian car designer Giugiaro – as well as giving it a rear resembling Darth Vader’s face mask, the redesign apparently make servicing much easier.

Pick through the spec sheets, though, and new and old look rather similar. The same 7.8-litre Deutz engine powers both the C9000 and the bigger 60-series models, and they both have a 6.7m2 straw walker area.

The threshing system, sieves and cab – other than a removable fridge and a bit of new trim – are pretty much the same, too.

But Deutz claims there have been enough subtle changes to give the C9000 machines 10% higher output than the 60-series. The most noticeable of these can be found in the intake elevator where an extra feed roller has been added. This sits in front of the main elevator and has a series of retractable fingers to grab the crop and force it on to the elevator chains.

A longer, 6m discharge auger has also been fitted to keep trailers clear from the wider 9m header.

The addition of the new range means Deutz now has three classes of combine to sell. The 6040-series is the cheapest on offer, with five straw walkers, a 6.1-litre engine and chunky levers instead of electronic buttons. The current 60-series becomes a mid-range machine with the C9000 taking flagship status.

Deutz Fahr is one of the smaller players in the UK combine market, but it has big plans for expansion.

Since the purchase of Croatian combine builder Duro Dakovic in 2003, Deutz has steadily increased production.

In the past three years the number of combines coming out of the factory has increased from 170 to 350 a year and it plans to increase this to 700 by 2016.

Germany is still the biggest market for Deutz combines, accounting for 23% of total sales with France second at 17%. UK sales account for just 5%, which equates to about 18 machines a year.

When they go on sale in the next few weeks there will be four C9000 models to choose from – the 5-walker C9205 TS, the 6-walker C9206TS and their TSB hillside equivalents.

All are fitted with the same engine, but it’s been tweaked to develop 334hp in the 5-walker and 395hp in the 6-walker machines.

Threshing is handled by Deutz’s Maxi Crop drum arrangement that has a concave which can be adjusted independently at the front and rear. The maker says this extra adjustment makes it easier to get crop flowing smoothly through the machine. It’s also said to help improve straw quality and reduce fuel consumption.

Hillside machines are capable of 20% side-to-side levelling and 6% front-to-rear and have the same 9,500-litre tank as the conventional machines.

There’s also the option of speccing a hydraulically driven rear axle as well as a front tracks for those that have to contend with particularly boggy conditions. Top speed stays at 30kph when these are fitted.