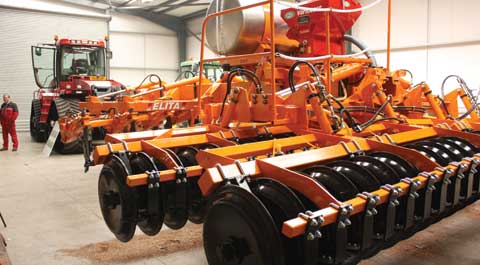 Getting rape into the ground quickly and evenly can be a surprisingly tall order, especially when you’re working at seed rates as low as 20 seeds/sq m.

But a novel design of 6m cultivator drill being given its final touches in a farm workshop in Leadenham aims to cover the ground and give reliable establishment whatever the weather and soil type.

Andrew Ward, a former Farmers Weekly arable farmer of the year, had a very specific idea of the type of machine he wanted. However, there was no such tool on the market, so he decided to build his own.

With the help of kit designer Philip Wright from Wright Resolutions and cultivator and drill maker Simba, the Elita LD was born. The last two letters signify both low draft and low disturbance.

“Our 3.8m, 7-leg Simba Flatliner did a fantastic job but we had to keep it going through the night to cover the ground,” says Mr Ward. “The main problems were the lack of width and the fact that it couldn’t apply liquid fertiliser. And it was a two-pass system, too.”

Minimising establishment costs is a very important part of achieving a low overall cost of production, he points out, so the aim of the Elita HD is to establish rape in one pass. 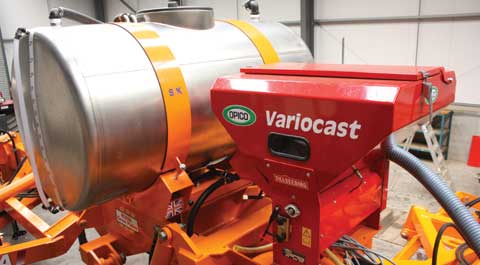 Liquid fertiliser is piped to pencil jets in font of the discs.

The Elita HD uses the drawbar and main beam from a 6m Simba Solo 600R, but the two angled beams which carry all the legs were designed by Mr Wright. All the profiles were plasma cut by a local engineer and welded in place in the farm workshop.

There are no discs on the machine, says Mr Ward. That’s for the simple reason that, when it comes to discouraging blackgrass from germinating, the less soil that is moved the better.

Instead 13 tines set 465mm apart do the initial work. They were designed by Chris Lane at cultivator maker Tillso and have carbide-tipped points, wings and interchangeable frogs. The two lines of angled cross beams also mean that there’s plenty of space for trash to pass between the legs. 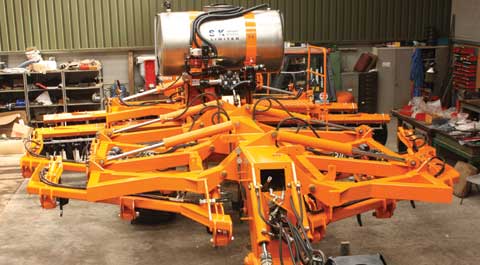 The original Solo had one row of 700mm rings, but Mr Ward wanted two 700mm rows which would give the same seed-to-soil contact that he was achieving with the old two-pass system. To achieve this, the existing row had to be moved back 300mm to allow the new line of DD rings to fit in front.

A 1,200-litre tank on top of the machine pipes liquid fertiliser – if required – to a series of pencil jets just in front of the first set of DD rings. The rings leave a groove into which the Opico Variocast gently drops the seed after it has passed through a diffuser which expels the surplus air.

Finally, the second set of DD rings presses the soil together, giving an ideal start for the rape seed.

With the new machine due to be tried any day now, Mr Ward is optimistic that it will do the job intended. He is hoping that the new machine will have a workrate approaching 4ha an hour, compared to 2.5ha an hour on the old unit. 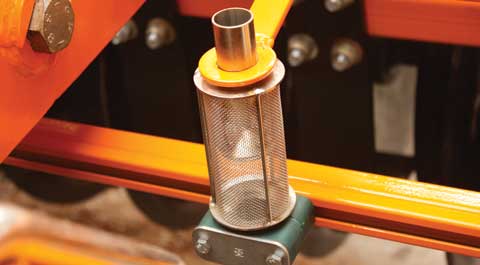