Four years ago we profiled a dairy herd with a difference – Prospect Farming in Dorset, where the cows not only run outside all year round but are also milked outside through mobile parlours.

Since then quite a bit has changed, with partners Tom Foot and Neil Grigg increasing throughput by moving from hired-in 8-16 milking bails to a pair of their own home-built 20-a-side portable parlours.

“We were fortunate to be offered the tenancy of Longlands Farm in 2011. The land was predominately arable with a modest set of livestock buildings that weren’t really suitable for milking,” says Mr Grigg.

“Our tenancy initially didn’t allow for improvements, so we were reluctant to invest substantially in buildings. We considered a number of options but decided that we could get started by hiring in some temporary milking bails.

“Although they were far from ideal — being time-consuming to move and manual to operate – they proved the concept would work in our situation,” says Mr Foot.

See also: Tips and advice for planning and building a new silage clamp

As cow numbers grew from 460 in that first season to 750 three years later, it became clear that there was a desperate need for extra parlour capacity.

The options were limited for mobile parlours that would have the output potential to deal with serious numbers of cows. With Mr Foot’s self-taught engineering skills, the partners decided that the simplest solution would be to design and build their own tractor-towable rigs.

“Obviously the main criteria was that we could milk a large number of cows quickly and efficiently through any new milking set-up. The difference was that it had to be easy to move,” says Mr Grigg.

“We couldn’t afford to spend a day taking down and then setting up a parlour – it had to take less than an hour to shift from field to field.

After measuring a friend’s 20-40 herringbone, and with the help of local engineering firm MJ Fry, the pair compiled a set of drawings.

The construction process wasn’t straightforward and by the nature of the job it happened on a fairly ad hoc basis, with a meeting every morning at the workshop to decide how things were going to take shape.

It started out with a pair of chassis rails that would be the backbone of the whole rig, forming the support for the cow stands and the sides of the pit.

Two eight-stud axles were cut in half and modified so that they could be coupled back together using top-link style turnbuckles for transport.

With the parlour in its working position, these are removed to make for free access up and down the pit. (Cranked axles would have ground out too easily.) 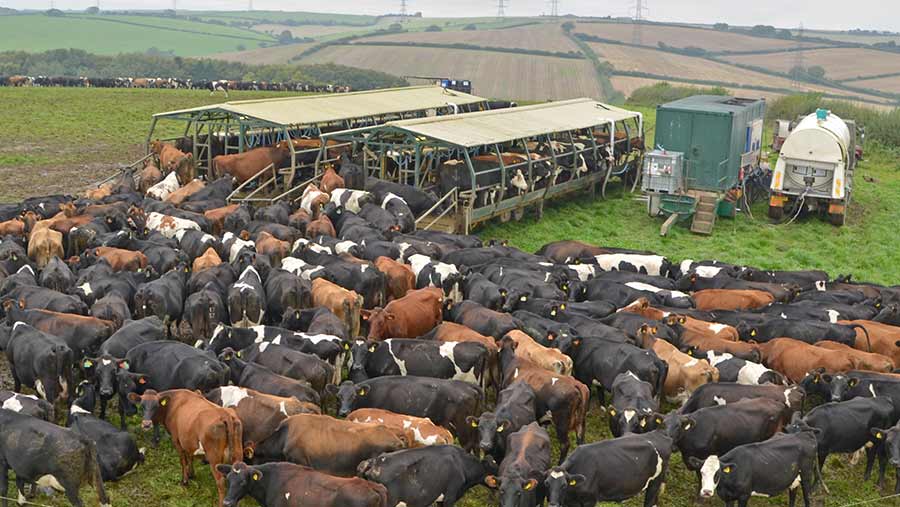 The checker-plate steel platforms down each side are supported by box-section cross-members, which also carry the framework for the breast-bars and roof.

There are a total of 12 hydraulic jack legs along the length of the rig that stabilise the platforms and level the parlour on uneven ground.

Each operated by individual spool-valves, they all run off a single ring-main circuit with oil provided by a flow-and-return service from the tractor that is used to move the parlours.

At the back is a full-width set of shallow steps that the cows climb to enter the parlour. Running on skids, they skim along the surface for field moves.

Up front a pair of folding steps flank the drawbar to provide the exit route for the cows and hinge upwards with the aid of assister springs when the rig is on the move. 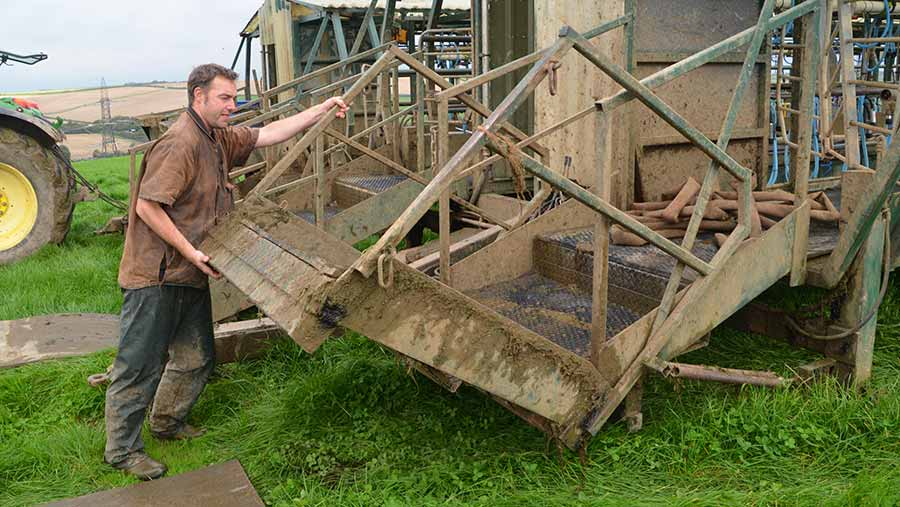 Each parlour is 4.3m (14ft) wide, so gateways on the main ring-fenced grazing block have all been widened to accommodate the oversize rigs.

It’s a bit of a faff but it is possible for the corrugated plastic roof panels to be removed and the cow platforms split in half to narrow the parlour down to a 10ft transport width, should it ever need to go on the road.

“The basic structure of the system is very straightforward – it just took reels and reels of MIG wire and bucketfuls of Tek screws to get it right,” says Mr Foot.

“The technical challenge was getting all the parlour kit installed. We sourced second-hand clusters, cups and drop-down washers but decided to purchase new Fullwood pulsators and pulsation boxes.”

Three 30-year-old Fullwood vacuum pumps were obtained pretty cheaply and are housed in a plant trailer that is parked alongside the parlours in the field. 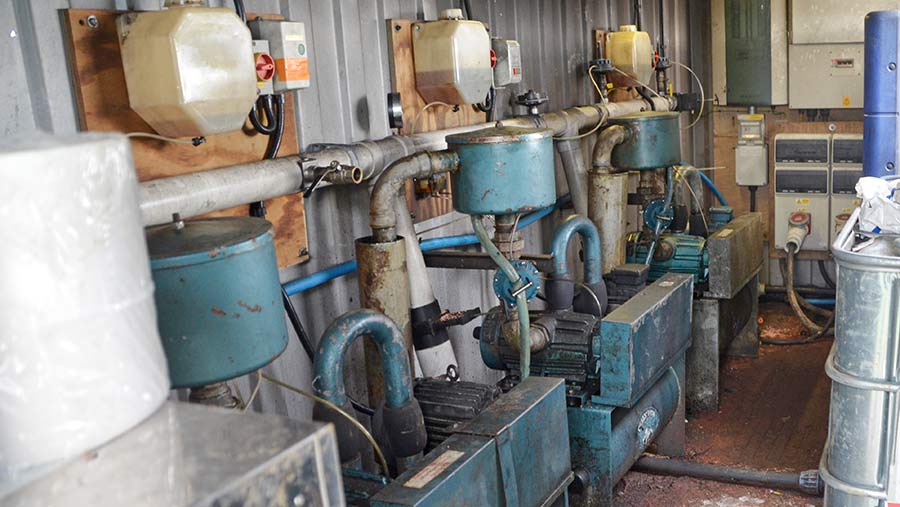 A shipping container protects most of the equipment from the elements with a gantry at the rear to carry a ICS Cool Energy milk chiller unit.

The milk is piped directly into an 18,000-litre milk tanker body and can, if required, hold cold milk at a steady temperature for 24 hours without further refrigeration.

The tank is mounted on a six-wheel-drive ex-army DAF eight-wheeler. Bought from MOD dispersal specialist Withams, the 350hp truck is registered as an agricultural vehicle and is more than capable of following the parlours around the farm and then bringing back the cooled milked to the yard for collection. 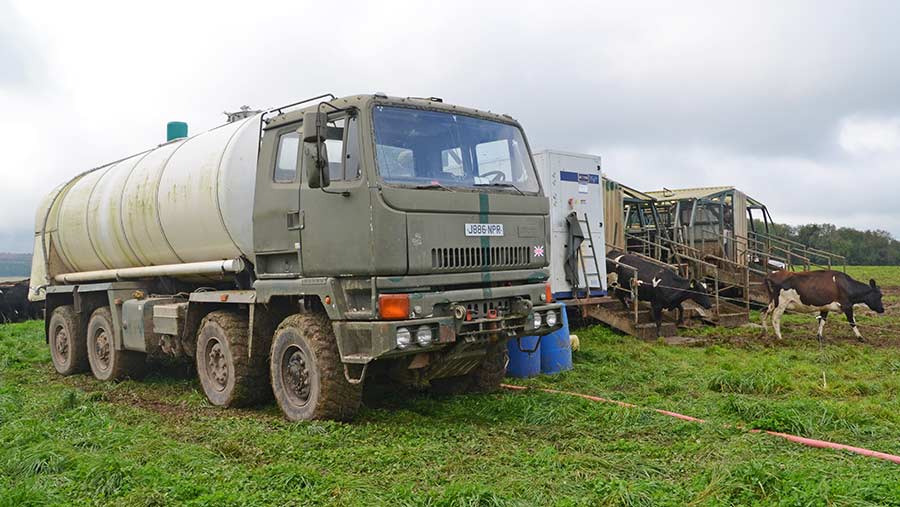 Capable of handling about 120 cows an hour, the set-up worked well from the start with very few modifications required — and so in 2013 work started on an identical second rig. The two now run alongside each other, comfortably dealing with 860 cows in a four-hour shift twice a day.

“The key to what we are doing is simplicity. There’s nothing special about what we do – it’s just that our parlours have wheels and we move them from field to field each day,” says Mr Foot.

“People come and visit us to see what we’re doing on a regular basis and a number have been inspired to go away and build their own mobile parlour, which we take as a compliment.

“We have also had a number of enquiries to build our parlour rigs and we’re just starting on our first one this autumn.”

Alongside manufacturing, the enterprising pair have also rebranded the business as The Open Air Dairy.

As a result of public interest in the concept of free-range food, they are working hard alongside their milk buyers, Barbers and Ford Farm, to promote the concept with the mainstream media.

Staff: Tom Foot and Neil Grigg plus six other full-timers