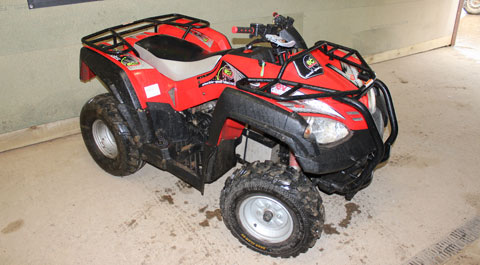 The Eco Charger is an impressively capable debut ATV, but it will probably be the upcoming 4wd version that will make a real impact on the market. It’s ideal for general farm duties and lower running costs should more than compensate for the higher purchase price.

An Ilfracombe farmer has set about developing his own electric ATV. Oliver Mark took it for a spin

Fred Chugg set about developing the Ecocharger electric ATV three years ago, assembling the components in a barn on the farm and is now producing two or three machines a week.

The chassis and plastics are imported from a Taiwanese maker, but all the other components are sourced closer to home. The motor is from Devon, controls from Essex and batteries from Swindon.

They can produce two or three machines a week, but the market for the vehicles hasn’t yet taken off.

“Part of the problem is the public’s perception of electric vehicles,” says Mr Chugg. “But they’re road legal, tax free, and it costs about 1p a mile to run.”

The batteries are charged on site using a 400w wind turbine, which means the bikes are carbon neutral and effectively free to run. The power from the turbine is also used to run all the machinery in the fabrication process including grinders and drills.

“With a typical livestock farmer clocking up over 3,000 miles a year, there are serious savings to be had,” says Mr Chugg.

The company reckons with farmers spending £1,160 a year on petrol covering 3650 miles, it can be cut to about £49 using the Eco Charger over the same mileage.

The ATV costs about £7,000 – 15-20% dearer than the average petrol powered machine – but Mr Chugg says costs can be clawed back when it comes to fuelling it up. The machines are currently being sold through Mole Valley Farmers.

Extra cubbyholes make use of space that would have been taken by the engine, and the dual seat means a passenger can be carried legally.

The plastics are available in a range of colours and there are also replaceable mudguard extensions. But there is less in the way of front and rear racks – loads are limited to 30kg on each so won’t be capable of carrying heavy slug pelleters or sprayers.

The Taiwanese frame seems sturdy enough, with 3mm box-section supporting the chassis. Suspension-wise there’s a single swing-arm at the rear which is set further forward than you would normally expect, leaving space for two more batteries to be tucked away. The plan is for independent suspension to be included on the 4wd version, though.

Where you might have expected an engine, there is instead an array of electrical components. There are six 12v lead-acid batteries buried under the shell – four in front and two behind the military-spec DC motor.

This can provide up to 20kW (27hp) of peak power, plenty more than the 2kW (2.7hp) that is required for everyday work. The electric motor has a power conversion ratio of 95%, compared with the 20% of a petrol powered ATV.

From flat, charging takes about five hours from a standard 13A socket and costs about 50p using off peak electricity. The six deep cycle, long lasting batteries can be charged 800-1,200 times (lasting about four years) before they need replacing at a cost of £816.

Renewable energy sources such as a turbine or solar panels can also be used to charge the machine and effectively make it free to run. A turbine and inverter providing 3kW of power can be bought for about £1,200 – the equivalent of a year’s worth of fuel.

Power drives directly to the high or low-range gearbox. There’s a flick-switch to change between forward and reverse, and the 4wd version due by 2013 will boast a shaft rather than chain-drive.

What noise? Push the starter and there’s pure silence; stab the throttle and there’s a low whirr. As you go faster the whirring increases, but not by much.

The throttle is incredibly responsive. This is partly because the electric motor produces its highest torque on start up, but probably also because there’s no noise so you don’t quite expect to be propelled forward like a human cannonball. Having said that, the eagerness of the throttle can be set, we had it on the fiercest of the 10 settings.

Top-speed is a serviceable 36mph (or 20mph in low range). Slopes aren’t too much of a problem either. Even after a morning of heavy rain in Devon which left a slick surface, the Eco Charger’s 2wd dealt with it adequately.

In low range, there’s plenty of torque to tow a sizeable load. We pulled a trailer carrying two ATVs and grossing about 600kg, which it managed with little problem. The tow bar is optional, though.

The major question marks hanging over electric powered machines is their endurance, but it didn’t seem to be too much of a problem. While the Diesel4ce ATV (tested last week) might be able to cover 320 miles on one tank, it is still parked up in the same shed every night. The Eco Charger is capable of closer to 32 miles – far more than the average farmer will cover in a day – and it can be plugged in every evening to charge.

Cold weather can mean battery life is reduced, while heavy-going conditions might also drain it more quickly. However, there should still be ample juice to see it through an average day’s work.

Despite being weightier than most, the steering is light, even when trundling along at mobility-scooter-speeds. The turning circle did seem to be restricted by the chassis, but if you’re brave enough, you can thwack the throttle to spin the rear wheels and turn the whole machine on a sixpence.

The British made controls are pretty logical. Being electric, it does have several less common features, notably the forward/neutral/reverse flick switch and quick stop button. The dashboard shows all the vitals, too, like total distance travelled, individual trip distance, and battery level remaining to make sure you don’t get caught short.

There’s also a clever dial in the front cubby, which can control the max speed (but not the torque) of the machine. An old-school-style selector on the right hand side sets high and low range.

Three linked hydraulic disc brakes are operated with the usual right-sided foot pedal. The Eco Charger also has regenerative braking, so power can be returned to the battery during deceleration. This also helps to reduce brake wear as you hardly need to touch them.

Braking power is perfectly adequate. Jump on the foot break and it will pull you up. There’s a clumsy looking parking brake on the right-hand-side of the handlebars which does the job.

The company reckons servicing costs can be reduced from £250 to £80 because there are fewer moving parts.