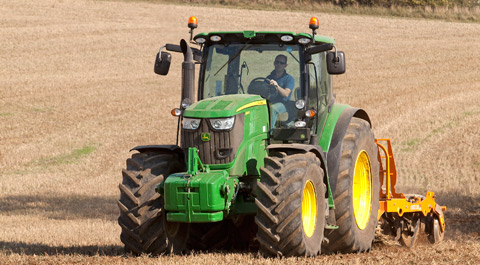 In avoiding the use of AdBlue exhaust treatment to limit emissions, John Deere has managed to tweak the new engine so that it is torquier and more thrifty than before.

In work its extra tonne means it grips better than its predecessor, although it does feel a bigger, bulkier machine. The new cab is a pleasant enough place to spend a few days and there has clearly been a lot of time put into making the inevitable in-cab computer as simple to use as possible – a big bonus.

A new engine, cab and new transmission on the way, mean John Deere’s 6-R series tractors have much to offer. Nick Fone puts the 190hp 6190R through its paces

Nineteen ninety-two was the year the Maastricht Treaty was signed, Euro-Disney opened in Paris, Carlos the Jackal was sentenced to life in prison and Right Said Fred topped the charts with ‘Deeply Dippy’.

But more importantly it was the year that John Deere launched its iconic 6000-series tractors.With a clutchless shuttle, four-speed powershift and electronic linkage controls, it was a huge step up from the company’s ever-popular round-cabbed 30-series machines.

It was the 6000 that propelled John Deere to top of the sales charts across Europe and, although different evolutions have occurred over the last 20 years, it is the same basic platform used today that has helped to keep the brand at the top of the tree.

Now though that is set to be challenged. Deere’s German design team have given the 6000-series its biggest shake-up yet. A new engine, gearbox, cab and computer controls make this a pretty radical revamp.A new numbering system should help to make tractor power a bit clearer too.

While a ‘6’ up front denotes a tractor from Deere’s middleweight line-up, the following three digits represent that model’s rated power. The 6-R range now swells to include replacements for all the firm’s previous 6030 machines and smaller 7030s – all built at Mannheim in Germany.

We were lucky enough to get out hands on a pre-production 6190-R, effectively the direct replacement for the outgoing 7530. (However the range will now be topped out by a 210hp 6210R.)

With several days to get acquainted with the new tractor we had the chance to tackle a range of different tasks – muckspreading with a 14t Bunning tail-flinger, deep soil loosening with a 9-leg McConnel Shakaerator, stubble work with a 3m Simba DTX disc/tine/press combination and maize carting with a 16t Marston Domex trailer.

Aside from its striking hawk-eye styling and lofty bonnet, the most eye-catching thing about the 6190R is its new four-post cabin.With more than a nod to Deere’s larger US-built tugs, it’s significantly roomier than before with the doors hinged on the rear B-pillars.

Previously 30-series buyers could choose between a four-post design or a more conventional six-pillar setup with opening side windows – the latter proving vastly more popular, at least here in the UK.

Why the company has decided to do away with that choice is something of a mystery. (Watch this space to see if side windows re-appear on the options list).

Clearly aware that not everyone likes to be shut up inside a hermetically sealed box for hours on end, Deere has made one concession to fresh air enthusiasts who don’t want to be immersed in dirt, dust, noise and oil from an open back window.

Directly over the driver’s head there is a letter-box shaped glazed slot. It opens a few inches to let in the fresh air and boasts a roller-blind to avoid burnt bald-spots.The big plus of the four-poster is visibility.

Views all around are excellent except to the pick-up hitch which, even with the clutch and brake pedals at tip-toe reach, is impossible to see. Dropping trailers for the forager is definitely a chore to be avoided with this tractor.

This is down to the cab being mounted further forward than before – a factor which, in combination with a new adaptive hydraulic suspension option, has made ride quality significantly smoother. On field and road it’s impressive but hit some really bumpy farm tracks and, like any other sprung cab, you’ll start to feel distinctly like a blue-bottle in a jam-jar.

The tractor we tested was specced with Deere’s new touch-screen CommandCenter computer. This takes the company leaps and bounds ahead of the competition for one reason only – it’s dead simple.

If you’ve got to have a computer to monitor and alter tractor settings then this one’s the one to have. On its standard ‘Home’ page all the usual things are displayed from spool-valve status to linkage lift.

Not particularly remarkable there then but the beauty of this system is that you just plonk a fat fore-finger on the relevant part of the screen and you’re taken directly into the settings page for that function.

Plus and minus key can be used to tweak things or those more well-versed with the existing Deere set-up can plump for the familiar thumb-wheel to scroll through settings. And, should you want to customize the various pages for different jobs, it’s dead easy.

Just hit the Windows-style drop downs to the side of each box and you can chose what appears in that spot. As well as the usual stuff, the screen can also display GPS guidance info and feeds from a number of cameras.

Great as it is to use, our old grumble still remains. Even with ‘hot-keys’ on the right-hand console to take you direct to the right menu, it still takes longer to tweak settings such as draft sensitivity, lift height, etc… than it ever did with good old-fashioned dials.

While Deere’s time-tested 6.8-litre block forms the basis of the 6190’s power-plant, there have been many changes to make sure it complies with the latest emissions regulations.

As before, a variable geometry turbo is employed along with cooled exhaust gas recirculation but things are different when it comes to the stack. Lurking deep inside a chunky muffler, a type of catalytic converter reacts with the exhaust gases to reduce the output of carbon monoxide and hydrocarbons.

Following that, a particulate filter mops up the tiny bits of carbon that would otherwise be blown out into the air. Over time this soot builds up and, sensing this, the engine management computer prompts a cleaning cycle – a light flicks up on the dash and a strange noise emanates from under the bonnet as diesel is injected into the filter to initiate a ‘burn-off’ cleaning cycle.

In addition to meeting the strict emissions rules, Deere reckons to have improved performance and fuel usage. And, that seemed to be the case with the nine-leg Shakaerator.

Head-to-head, the 6190 certainly outdoes the 7530 on pulling power (thanks in part to the fact that it weighs in almost a tonne heavier).And, although it can’t be taken as scientific, working for exactly the same amount of time in the same field, the new tractor used approximately 10% less diesel than its predecessor.

However from the middle of next year there will be another option. The company has just announced the launch of a new semi-powershift transmission.A 24F x 24R box with eight powershift steps and three powered range changes, where it is said to differ from other similar set-ups on the market is that it uses twin-clutches to minimise delays in gear changes.

Also known as a ‘dual-path’ transmission, drive for alternate gears is handled by two separate clutch-packs. (See diagram). Dependent on whether the tractor is accelerating or decelerating, the gearbox control computer will pre-select the next ratio up or down.

The transmission will then switch from one geartrain to the other when prompted by the operator or by the computer when in automatic mode.Used by the likes of Audi in the automotive world, Deere says this arrangement is so effective in limiting the range-change delay usually associated with semi-powershift boxes that it will offer similar levels of versatility as a stepless CVT box.

The big advantage of this is drivetrain efficiency. While the hydrostatic element of any CVT box brings with it an inherent power loss, Deere reckons that by having a fully mechanical transfer of power, this new box can offer a power efficiency improvement of approximately 4% when compared with a CVT. And as an extra added bonus, potential purchasers can expect it to be significantly cheaper than the firm’s AutoPowr-equipped tractors.