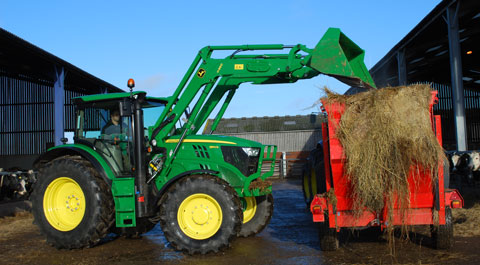 John Deere has launched a new automatic tractor loader that promises to take the headache out of tedious handling duties.

John Deere might not make telehandlers anymore, but that means the maker has had time to develop a rather clever automatic loader for its tractors.

Return-to-position (RTP) is a new system that automatically returns a loader and its attachment to a preset position with just a couple of flicks of the joystick. That means for repetitive jobs such as loading a grain lorry or mucking out a cubicle, the loader will do a lot of it by itself.

It all sounds pretty complicated, but it’s actually quite simple to use. In normal operation the electronic joystick works exactly as you would expect. But click it beyond its usual limit and it will automatically move to one of the preset positions.

Pull the joystick all the way back, for instance, and it will automatically lift to the height that was previously set in the computer. Click it right and the carriage will tip to the preset position, and so on.

Before starting the job it’s worth taking a minute to set it up properly.

A couple of taps on the computer screen brings up the loader setup page. There are four buttons in the top right corner (one for each of the joystick directions) for setting the positions. This is very simple – just move the loader into the position you want, press the relevant button and it’s done.

For loading a grain lorry we set the forward click to drop the loader to the ground and the left click to bring the bucket up from a tipped position to perfectly level.

That meant that we could drive into the shed, click the joystick forward and to the left, and the bucket would end up in the perfect position for attacking the heap. Pushing the joystick forward past the next level of resistance put it into float so that it followed the ground better.

After driving into the grain we crowded the bucket manually and then clicked it all the way back to get the load to move up to full height. Once at the lorry, the right click was set to fully tip the bucket and we used the automatic shake function to make sure it was completely empty.

The system definitely took a bit of getting used to, but once mastered we could really start to see the benefits.

Because lowered attachment visibility is usually pretty poor with tractor loaders it’s reassuring to know it is always going to be in the right place and at the right angle when dropping it to the ground.

And because the loader moves to its position automatically, there’s no need to keep pressure on the joystick.

The safety systems are the main gripes – it’s a bit irritating that RTP has to be switched on every time the engine is started and because the loader stops in its tracks if you move your hand from the joystick, you have to train it to stay put.

Adjustment of the armrest-mounted joystick is also a bit limited.

The base price of the H360 loader we tested is £5,388 and the RTP upgrade is an extra £731. Getting a tractor loader ready costs £4,373. This includes the electronic joystick, mid-mounted valve, loader brackets, multicoupler and hood guard.