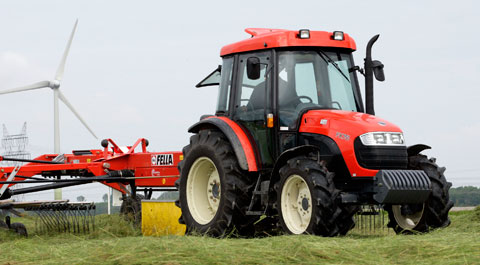 Korean-made Kioti tractor was the most sophisticated in this group.

Well known in the ground care sector, Korean-made Kioti tractors range from 20hp to 90hp, with a 120hp model in the pipeline. Part of the Korean company Deadong, the make is well known in the USA and is marketed in the UK by Rustons Engineering.

With a lot of electronic gadgetry and a powershift transmission, the Kioti is the most sophisticated tractor in this test.

The Isuzu engine develops 64.4hp at 1995rpm, consuming 284g/kWh. Torque is 283Nm, but weight lets the tractor down with the cultivator. It was good with the mower, though.

On first inspection, maintenance looks easy, but you can’t get to the filters as pipes and the dipstick are in the way. The catch for the bonnet is too close to the panel and it’s very difficult to open.

The best transmission on paper with three ranges, four gears and a splitter. However, clutch calibration was an issue. We tried to recalibrate it but even on the smoothest setting the clutch was overly aggressive. The pick-up point was far too high, and it was impossible to inch up to implements. Shuttle response is sluggish and when it does pick up it’s rather brutal.

There are five gears in the 4-12kph bracket. The high and low buttons should be the other way round (see picture).

Electric 4WD switch on the dashboard, but the diff-lock’s small pedal has to be pressed to engage, which is odd considering that everything else is electronic.

Styling is definitely reminiscent of a ground care tractor and with more than a passing resemblance to another popular orange brand. Well-built, modern-looking tractor with many safety features. Also, the only tractor on test with powershift gearbox.

Almost as good as higher spec tractors, with all controls located in a neat console on the left hand side. The adjustable steering column has controls on stalks and a clear display. Nicely finished, if a bit too plasticky. Ergonomics are the best of the group. Although the windows don’t open, the doors can be held partly open. Visibility is not great due to the wide bonnet and lots of plastic finishing. The cab is also fairly compact, especially for taller drivers. The exhaust runs down the left-hand side, which could prove dangerous for access.

At full revs, the Kioti measures the same as the Case at 81dB but at 4m, it’s a more sedate 80dB. The transmission whines over 2000rpm and there’s a constant tic-tic hydraulic pump noise.

The control levers are easy to operate but placed close together. Draft control had little effect. The top link holder is good, and the stabilisers have several pin holes. The lift arm has to be disconnected to adjust the height.

Four standard spool valves with lockable cross lever for front loader (not fitted) and prominent levers on the right-hand console. The levers are heavy to operate, lack a float position and there are no markings on the spools to indicate which is which. Lowest pump capacity of the group at 30litres/minute.

Standard are three speeds – 540, 750 and 1000 plus drive. The PTO clutch is electric with an MF-style yellow pull-up button. There’s a clear light on the dash to show it’s engaged. There’s also a switch on the dash for extra safety, with manual, neutral and auto PTO positions, but you have to be in neutral to start the engine. PTO drive disengages automatically when the arms are lifted to 20%.