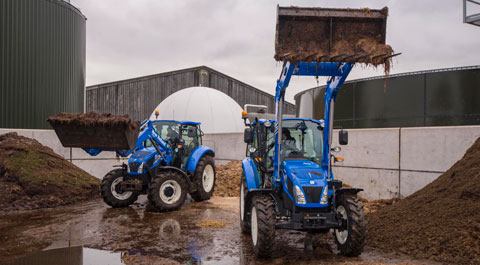 With more makes and models on the market than you could shake a stick at, choosing which loader tractor to buy can be a migraine-inducing decision. Oliver Mark and James Andrews try out two of New Holland’s tiddlers

British farmers are pretty spoilt for choice when it comes to the sub-150hp tractor sector.

Flick through the tractor buyers’ guide and you’ll find almost 20 different brands, each of which offers its fair share of variations.

Traditionally, farmers looking for a small-engined all-rounder have had to sacrifice comfort and performance, but New Holland hopes to have changed all that with its latest offerings.

The Basildon-based manufacturer does have a bit of pedigree in the small tractor market, with Ford’s 1980s-built 4610 and the small-but-powerful 7740 of the 1990s.

This year the outgoing (but not yet gone) T4000 and T5000 loader tractors have been rebuilt and rebadged as the T4 and T5 respectively.

Three models make up the Italian-built T5 range. Starting from 99hp and including 107hp and 117hp variants, the range covers a key horsepower sector for small-scale farmers.

The same fate befell the T5000’s innards as those of its older siblings, but a combination of particulate filter and EGR should keep the T5’s exhaust gases clean enough to appease those climate change fanatics.

The 3.4-litre Fiat engine is lively enough for yard work and should be pretty easy to service – because livestock farmers love their machinery maintenance. All the vitals – oil level, air filter and coolant – are pretty easy to get at. The 500-hour service interval is considerably higher than most of the T5’s competition, too.

The T5’s 3.4-litre drives through four speeds in three ranges. A two-stage hare/tortoise multipower gives a little extra choice, too.

The range gearstick is positioned at ankle level on the cab floor – a bit of a giveaway that you shouldn’t be using it too regularly. And sure enough, you’ll hear the telltale rattle of cogs if you try and shift ranges on the move (although NH insists it can be done).

This is bound to be an irritation when you’re lugging about heavy loads and seems a bit old fashioned compared with many of the easy-to-use semi-powershifts on the market.

Flicking the column-mounted shuttle stick back and forth makes mucking out in tight spaces a doddle, although finding neutral by pressing a button on the end of the stick still takes some getting used to. We’d also like to see a ‘park’ position added – it’s currently only available on the big T7 and T8 tractors.

Another perk we’d like to see shared with the little ’uns is Fast-steer steering. Of course it means more complexity and more money, but it’s pretty handy when you’re shunting around in livestock sheds the size of a London bedsit.

The cab has grown by 20% since the T5000, but it’s still one of the best-proportioned and better-looking loader tractors on the market.

Inside all the controls are laid out logically. Except for one – the pto speed stalk has found it way to the driver’s left-hand side where you’d usually find a cup holder.

The LCD dash keeps track of area covered, fuel used and a few other stats – enough technology for a stockman’s tractor.

Since the 5000 series, New Holland has also put in an openable roof window so you can see the bucket even when it’s in the clouds. Views sideward are good, although the bonnet could droop a bit more.

Buyers have a greater choice of rubber, too. T5s can sit on R38 tyres if it’s extra ground clearance and grip you’re after. These do require bulkier trumpet housings, though, so you won’t be able to switch willy nilly. R30 tyres can be specified for those poking around in low-clearance sheds.

Our test tractor had a factory-fitted New Holland 740TL loader hanging off its nose.

A quick coupler can be specified for mating up the mid-mount valve block. We’d opt for this as it does save wrestling with the pipework like Steve Irwin with a boa constrictor, especially if you’re dropping off the loader regularly. Hydraulic-locking pins are an option, too.

The mounting brackets have been tucked 150mm closer to the cab to improve the tractor’s balance, and the suspension accumulator and self-levelling system plumbing is all hidden in the loader’s frame.

We’d like to see a declutch button on the loader joystick. There’s one on the gearstick that can be used for shifting between cogs, but we reckon it would be better placed on the loader controls.

The boxy shape of the factory-fit loader control lever isn’t particularly comfortable, either. Stoll’s retro-fit stick was nicer to grasp and you can choose to have it built in if you like.

Electronic draft control is now standard and uses the same stiff roller-wheel that you’ll find on all the larger T-series tractors. Rear lift remains almost 5.5t, which should be ample for occasional fieldwork.

The basic version gets a 65-litre/min hydraulic pump, but you can opt for a beefier 84-litre/min unit. Two spools are standard on the starting spec ‘Classic’ version. You get an extra one if you fork out a bit more for the ‘Deluxe’. This also gets extra work lights, fender controls and air-con.

New Holland’s 55, 65 and 75hp T4 Powerstar tractors have escaped the clutches of the Tier 4 emissions police (until next year anyway). Because there’s no hurry, its predecessor, the T4000, will continue to roll off the Turkish production line until well into next year.

The T4 gets a slightly smaller 3.2-litre engine paired with a 12×12 gearbox. Eight creeper speeds can also be added in either direction.

The hydraulic powershuttle is nice to hold, but a long day of shunting to and fro will leave you with a left forearm like Popeye. New Holland says this still works as a clutchless shuttle, but there’s no feathering, so shunts can be neck-jarringly fierce if you don’t dip the clutch.

The basics of the cab are pretty similar to its bigger brother, although there are a couple of extra levers and handles and fewer switches. The transmission tunnel that hogged floor space in the T4000 is gone, too. 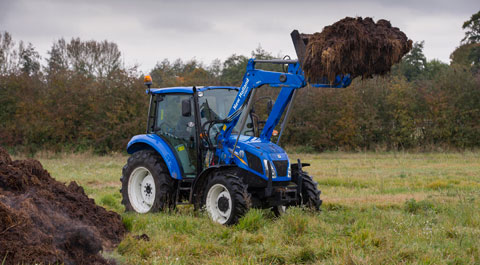 The biggest plus for both of these tractors is the cab. It’s roomy and offers decent views in every direction, particularly upwards with the addition of the roof window. The 500-hour service interval is a bonus for a tractor of this size, too.

Unfortunately the transmission is a bit too basic, particularly if you’re going to be doing much road work. For the same price you could buy something with a powershift transmission and get a few other extra features thrown in, too.

Can’t change range on the move

Fewer features than some rivals’ tractors

Whiney on the road