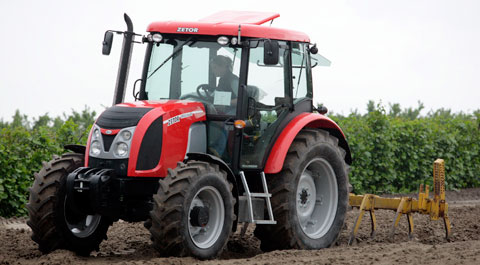 Zetor has found a new lease of life recently with powershift gearboxes and a 180hp model due for launch in the near future. The Proxima 85 originates from the Proxima 6441.

Fitted with Zetor engines, Carraro transmissions and Bosch hydraulics, this model was the most powerful on test, but still in the price bracket. In short, you get a lot for your money.

The Zetor 4.15litre engine is fitted with a turbo and intercooler as well as exhaust gas recirculation to cut emissions. It reaches 78.9hp at 1849rpm, using just 260.7g/kWh, meaning it’s the most efficient on test. Torque is 362Nm at 1490rpm, and it was able to cope with the cultivator easily.

The bonnet is easy to open in one step, but side panels can only be removed with tools. It had the best rad layout for cleaning as everything is located on a flat frame. Oil checking involves unscrewing the dipstick – not as easy as it could be. A built-in air compressor gives a bonus for clearing radiators and pumping up tyres in the field.

Two ranges are selectable via a lever on right hand side of seat, but it’s not synchronised. The main gear change lever has six gears, but their layout is the opposite of what you would expect, which takes a little getting used to. But gear changes are smooth, making it the second best behind the Farmtrac. The shuttle is on the steering wheel, but forward and reverse positions are very close, meaning neutral can be tricky to find. There are six gears in the 4-12kph range, but three of those are in the L range and three in H.

Both are electrically selected via a switch on the dashboard, with lights for when engaged.

Clearly the largest in the line-up. The cab is high but modern, with sculpted details like round lamps, but little details hark back to its Eastern European heritage. Simple and tidy at the back, but two pipes hang dangerously beside the right hand side of the bonnet, ripe for catching. Doesn’t look like a compact tractor.

Lots of space and good visibility. Several different types of plastic in the cab and mock leather give it a nicely finished feel. Dash was the clearest on test with all key levels shown. The steering column is adjustable both horizontally and vertically and a Grammer air seat is an option. Ergonomics are good, but nothing is labelled so some levers involve a bit of guesswork. Old-fashioned stop knob is an interesting touch.

With the lowest in-cab noise level of the line-up, at 80.2dB, it’s a surprise that the Zetor registers 92dB outside. Engine sound is comfortingly raw and powerful, and there’s only a slight rattle at 40kph.

Outside controls are better than on the Case IH but still not great. The levers were the best on test, but draft control only offers three positions, which all seemed to act the same. The top link could be a little too close to the back window when it’s in the storage position.

The spools could be positioned a little lower and the three outlets are horizontal instead of vertical. Levers in the cab are easy to operate and not too heavy, however float is easy to engage when pushing forward. Pump is 50litres/minute, like the Case IH.

The PTO system is confusing. The yellow lever (akin to a handbrake) on the left hand-side of seat needs to be lifted to start the tractor. It’s difficult to know which PTO range is selected, with a pull lever dictating transmission driven, neutral and engine-controlled. PTO engagement is smooth, but a light suggested the PTO is on even when it was off on test.