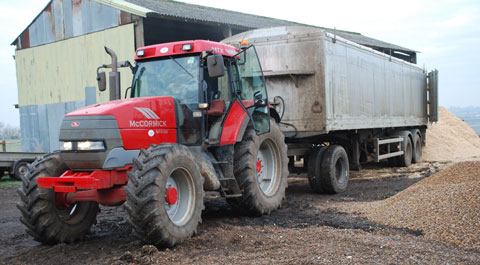 I like the simplicity of the McCormick. The gearbox is easy to use, the hydraulics are basic and there are no high-tech electronics to make things complicated.

It will pull forever on the plough or with a heavy trailer behind it and it’s pretty economical. But the quality of the finishing touches lets these tractors down.

The McCormick MTX range has been around since 2001. Originally equipped with six-litre Perkins engines, the tractors were based on the Case-IH Maxxum Series, which had been licensed for production at Doncaster by Case New Holland.

In 2004, the revised MTX BetaPower models were introduced, a range featuring six new models powered by a new a 6.7-litre Iveco/Cummins-designed engine.

The range continued in UK production until the Doncaster factory closed in 2008, McCormick resuming MTX production in Italy the following year.

McCormick’s Speed Sequencer gearbox was also available, in addition to an optional creeper gearbox. A two-speed PTO was standard while front lift and front PTO was offered as an option.

The Caton family’s McCormick MTX 150 was purchased from a machinery auction in 2009 to replace a troublesome Case-IH MXM155.

The 2006 model has since been used for a host of tasks including ploughing, drilling, spraying and trailer work.

While it doesn’t have the optional front axle or cab suspension, the tractor is praised for its sure-footedness, and, the performance of its 6.7 litre Iveco-Cummins engine.

Driver, Kevin Morson, has worked for the Caton family at Sibson in Leicestershire since 1976. As the main tractor driver on their all-arable farm, Mr Morson relies on a number of tractors, including two very similar Case MX135 tractors.

“I like the simplicity of the McCormick,” says Mr Morson, whose MTX has clocked just 3500 hours.

“The gearbox is easy to use, the hydraulics are basic and there are no high-tech electronics to make things complicated. You don’t need them on a tractor like this. This is a tractor that you can just climb in, turn the key and go.”

“It will pull forever on the plough or with a heavy trailer behind it. It’s also quite an economical engine. If you’re working it hard on the power harrow, it will use a tank full in a day, though.”

The cab is comfortable, too, and there’s plenty of room to put a lunch bag, he says. “The ventilation system is also excellent and there’s no clutter to make getting in and out the cab difficult.”

Mr Morson also like the fact that it’s easy to service and uses the same settings for implements as the Case MX models.

But while this McCormick MTX150 has made a good impression overall there have been one or two niggles to contend with.

These include, temperamental electronic components, such as the dash console (which works intermittently) and the PTO switch, which failed shortly after the tractor was purchased. The draft sensor pins on the rear linkage have also been replaced.

“It’s the quality of the finishing touches that lets these tractors down,” says Mr Morson.

It turned out it had never been installed at the factory, but McCormick would foot any of the bill to rectify it,” he says.

Some of the cab fixtures and controls, like the auxiliary hydraulic levers, are also too flimsy, he says, and the lock-outs on the levers are virtually useless.

“The pick-up hitch release cable is another weak point and its routing from the cab makes it prone to damage. Because it is bolted directly onto the PTO guard it’s quite difficult to fit a PTO shaft.”

In terms of major problems this McCormick’s service record is limited to fuel pump failure. This was, according to Mr Morson, almost entirely due to the poor quality of fuel used by its previous owner. Like many modern tractors, the MTX150 doesn’t like dirty fuel, he adds.

Overall the tractor has performed well, but both Mr Morson and his employer Andrew Caton say the McCormick MTX 150 is not as well built as the Case MX tractors it superseded.

However, they both agree that it’s a great source of reliable power for the money.

More from our driver’s view series: