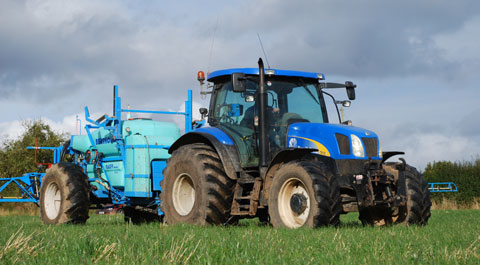 If you’re looking to bag yourself a second-hand bargain, the New Holland TS135A might not seem the most obvious choice.

Yet this compact high-specification tractor has plenty to offer farmers who are looking for a machine with a light foot print, and, when necessary, enough muscle to handle the heavy end of the log.

The TS135A is a reliable and very capable tractor. The engine is absolutely superb and the tractor out-pulls our newer T6090. It’s perfect for spraying and fertiliser spreading. There have been some problems, but it’s one of the best tractors we’ve owned.

Twelve months later the six-cylinder TS115 tractor arrived to replace the Ford-New Holland 7840, firmly establishing a presence for the company to expand its product line in the popular 100 – 140hp market segment.

Today, most early examples of six-cylinder TS tractors are now approaching their sell-by date, but the later, re-styled, updated and vastly improved TS-A models, (introduced in 2003) and TS-A Plus tractors (introduced in 2005) still have plenty to offer a potential buyer for less than £25K.

The New Holland TS135A ( the largest of the TS-A range) used a 6.75-litre six-cylinder, turbo-intercooled (Tier II) engine with an electronic power management system to boost available horsepower from 136hp to 162hp (Max). This meant that for a tractor weighing 600Kg less than the power equivalent New Holland TM model, the TS135A packed plenty of muscle.

All TS-A tractors were built ‘loader ready’ and all were available with Terra-Glide front-axle suspension, optional cab suspension and standard air-conditioning.

Jonathan Goadby and his family, who farm at Church End near Nuneaton in Warwickshire, operate an all-blue fleet on their mixed dairy arable farm.

With 800 acres of arable land and 280 milking cows, versatility is a key element for any tractor in their business and the TS135A has proved to be exactly that. Registered on a 54-Plate the tractor has accumulated 7,400 hours; drilling, spraying, fertiliser spreading and pulling trailers, all with hardly a glitch, says Mr Goadby.

“The TS135A is a reliable and very capable tractor. The engine is absolutely superb and the tractor actually out-pulls our newer T6090,” he says.

“One area to watch for is the brakes. They will last 3,000 hours, however a heavy footed operator can reduce that to 1,000 hours or less. If the tractor makes grinding noises when the pedal is pressed and there’s no braking power, the brakes need immediate attention. Replacing the brakes usually costs around £900.”

The need to regularly re-calibrate New Holland’s Range Command gearbox is often overlooked by operators new to the New Holland brand. However as Mr Goadby states, by carefully following the procedure written in the tractors’ manual, (every 400-500 hours), the associated problem of poor quality ratio changes is virtually eliminated.

“I always re-calibrate the transmission when the tractor is warm,” says Mr Goadby. “It doesn’t take long and it ensures the gearbox is always operating smoothly. We’ve had no problems with the transmission and routinely perform this as a part of the tractor’s servicing schedule.”

Criticisms pertaining to the TS-A’s cab are few, however it is noted that the air conditioning – which has no overhead vents – struggles on very hot days to keep the cab cool.

The quality and durability of the interior are praised, as is comfort, which is further improved by the tractors Terra-Glide front axle suspension, which is described by Mr Goadby as simple and effective.

There have been some electrical problems with the rear working lights though. “ For some reason the fuse regularly blows and the fuse box itself has become warm enough to distort and melt some of the wires underneath. This is certainly an area I would check if I was buying another one of these tractors.”

Another minor gripe is the fact the mud flaps on the fenders stick out too far and are prone to getting broken, he says. “They also trap a lot of mud which makes them very heavy and they place a great deal of strain on the fenders, eventually cracking them.”

Mr Goadby usually replaces his arable tractors every four or five years, but the TS135A has been so reliable, he’s decided to keep working it. “It’s absolutely perfect spraying and fertiliser spreading. I would say, this has probably been one of the best tractors we’ve ever owned.”