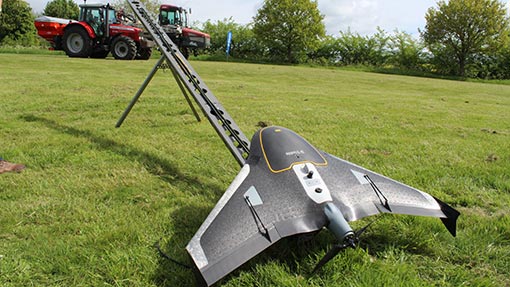 Rural skies are filling up with unmanned drones carrying out all sorts of aerial activities from scaring pigeons to calculating fertiliser rates.

They range from a few hundred quid to tens of thousands of pounds and the price tag generally corresponds to the quality of information and pictures you get back.

Now there’s a new one the market. And with its wallet-busting £35,000 price tag it’s definitely at the premium end of the market.

Trimble’s UX5 is a fixed-wing, battery-powered drone that looks like a miniature Stealth bomber crossed with Thunderbird 2. It takes off from a catapult launch rig and can spend up to 45min in the air at a time. Cruising at 80kph and 80m above the ground, it can cover 1sq km in that time.

Before take-off the operator keys in the area that it wants the drone to cover. It will then automatically work its way across the area with out any further input and will even land unassisted.

The UX5 comes with two cameras that are slotted into the body of the aircraft. The first is a standard Sony 16.1MP camera that takes a standard high quality picture once every second.

At the end of the flight these are downloaded into the software package that comes with the drone. This mashes the pictures together to produces a single high quality image of the field.

Farmers and agronomists can then analyse the field, checking for any signs of disease and weed pressure. The quality of the image means they should be able to zoom in close enough to identify individual plants.

The second camera takes near infrared images (NIR). These highlight the differences in crop vegetation across a field, which can then be used to put variable fertiliser application maps together.

There’s also potential for the system to pinpoint blackgrass hotspots, says Will Mumford from UK importer AS Communications. “By combining images from the standard camera and the NIR one we think we’ll be able to write a piece of software that can identify blackgrass.”

Before sending the UX5 to the skies, all operators need to attend a two-day Civil Aviation Authority course, write a flight plan and pass a flight test.

This requirement and the lofty price tag mean it is mainly suited to precision farming contractors offering farmers an aerial imaging service.