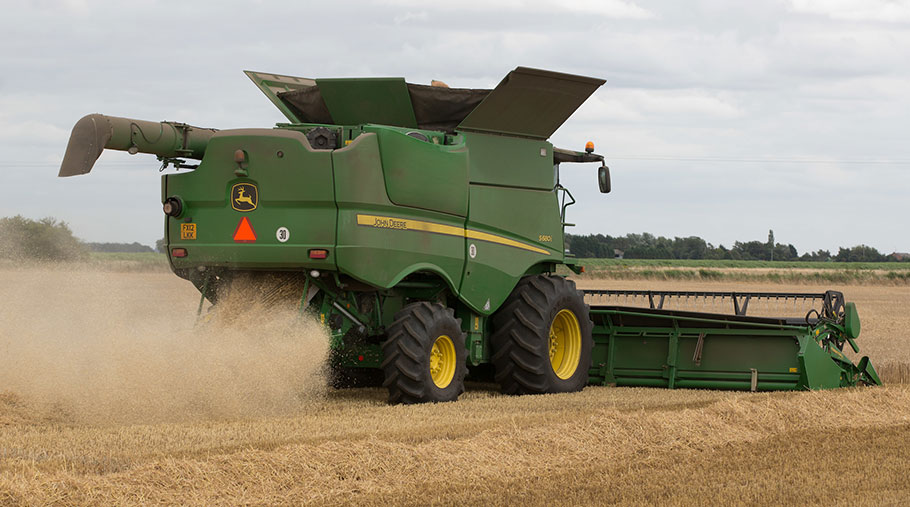 Checking the tyres before the combine is put away for winter could save farmers thousands of pounds in unnecessary replacement costs the following year, according to Mitas Tyres.

“Storing them correctly between harvests will maximise their life, avoid costly failures and minimise unplanned downtime at a critical time of the year.”

So what steps should you take?

1 “During the nine or 10 months when the machine is not being used it should ideally be supported on blocks to take the load off the tyres,” says Mr Wood. “The tyres should also have their inflation pressure reduced to 0.7 bar.”

2 If it’s not possible to store the combine in this way, he says, then inflating them to their normal operating pressure will prevent flat spots from developing when the machine remains static for a long period.

3 Pressures should also be checked periodically and, if possible, the combine moved slightly to rotate the tyres so that the weight rests on a different part of the circumference.

4 Tyres should also be protected from direct sunlight by storing the machine in a closed, dark barn. If that’s not possible then each one should be fitted with an opaque cover to prevent light from degrading the rubber.

5 Any shortfalls in the tyres’ integrity will be quickly exposed when the machine is used again, mainly because of the flexing of the sidewalls. Check them carefully for signs of wear and damage first, says Mr Wood.

6 Punctures and accidental damage are the most common reasons for replacement, says Mr Wood, but older combine tyres often have to be withdrawn from service because of ageing cracks.

These are caused by ozone in the atmosphere attacking the rubber compound and causing it to degrade.

7 Tyres should be stored away from high-capacity electrical equipment, such as a welder, as this will also increase the level of ozone in the air and cause tyres to degrade more quickly.

8 Ageing cracks, particularly those in the sidewall, may appear quite narrow and shallow. However they can quickly become wide and deep with flexing in service, leading to gradual pressure loss or even sudden failure.

If so, the tyres should be replaced as soon as possible with ones that match or exceed the manufacturer’s original specification, says Mr Wood.