The Eco Charger could probably step into the shoes of any farm quad. There’s no doubt it could do with some refinement, but it’s got power and speed aplenty.

It’ll probably be the 4wd version that makes the real impact on the market, but even so, Eco Charger is more than capable of doing a job of work.

Sick of splashing out as much as £300 a day on petrol to run ATVs at the activities centre on the family’s diversified organic farm in Ilfracombe, Devon, Fred and Wendy Chugg set about developing an electric version.

Most of the parts are British-made, while the chassis and plastics are imported from Taiwan. 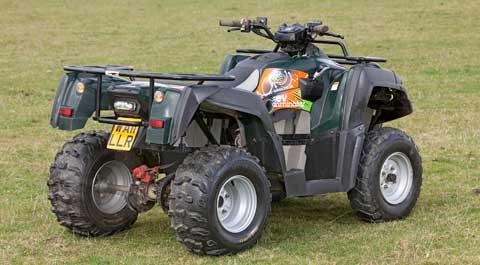 Looks-wise there’s nothing striking. It’s a similar size to its petrol rivals, and if you fancy breaking the monotony of red and green ATVs, there is the option of more vibrant plastics.

The tow bar is easily accessible (though not standard), and there’s a dual seat, so a passenger can be carried legally. However, 30kg capacity front and rear racks are a bit lightweight for slug-pelleting or spraying duties.

You wouldn’t know it’s battery powered until you come to peer under the plastics. Positioned in the middle of the frame is a 20kW (27hp) DC motor which has been left uncovered near the left-hand footwell. It did look a bit vulnerable to mud, dirt and dust, but the company says it’s not a problem as the motor blows to keep muck and dirt clear.

Providing the power are six 12v lead-acid batteries (72v total). They add plenty of extra weight, but it’s spread fairly evenly, with one tucked under the front, three in the middle and two on the back.

Unlike the UTVs tested, the batteries are gel-type, which means they can be laid at any angle and still operate as usual.

We gave the Eco Charger a good run-around for an afternoon. That included pulling a feeder and a fair amount of hill work, but it didn’t struggle and still had plenty of go in it when we called it a day.

Tugging weightier stuff like laden trailers will probably drain the batteries quicker, though.

A battery life indicator is an extra £200. We didn’t have one on our test vehicle, but we’re not sure how accurate they are anyway.

It’s probably best to make sure the ATV is plugged in to charge every evening. It’s not too inconvenient (particularly if you park up in the same shed every evening), and means you won’t be caught short for power the following day.

The Eco Charger comes with an inverter and cable that connects a 13amp socket on the wall to a small plug hidden away in the front cubby. From flat charging takes about five hours.

The deep cycle batteries can handle 1,200 charges before they’ll need changing. But replacements don’t come cheap – expect to pay about £105 for each battery.

There are four simple-sounding stages to starting up the Eco Charger.

Turn the key, wait for the dash to load (which requires a surprising amount of patience even though it only takes five seconds or so), flick the starter on the handlebars and then select drive direction.

Now that might sound like a very simple task, but because there’s no noise it’s very easy to get lost in the process, particularly if you complicate things by changing gear (from high to low or vice versa).

We found there was actually a fifth stage that involves tentatively prodding the throttle to see whether you’ve managed to start it and are about to move anywhere or not. The process would probably come easier once you’re better acquainted with the bike.

There was further confusion among the ranks when it came to gear selection. The mechanical-style selector on the side appears to do the lot – high, low, neutral and reverse can all be selected. But because there’s also an electric direction control, selecting reverse on the mechanical side simply reversed the function on the electric control. Confusing? Slightly.

It’s not a big deal though, and you could certainly live with it.

The Batmobile-style dash is pretty simple. It shows the trip distance, while a display on the right-hand side indicates which range you’re in. 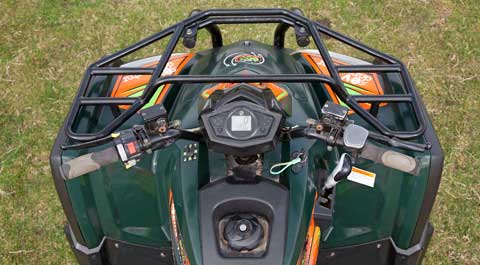 When it came to performance, the Eco Charger really impressed. All the insignificant aesthetic details are soon forgotten as you scoot past all the other machines on test.

Pulling off, the first thing you notice is the slightly disconcerting lack of noise. It’s not entirely silent when running – the chain driving the rear wheels whizzes increasingly. Running at full pelt the bike sounds spookily similar to a washing machine on full spin.

It was the quickest and one of the strongest of the bunch on test, embarrassing a petrol-powered Kawasaki 360 in a tug-of-war-style pull-off in the process.The throttle is very responsive and it’s plenty quick enough – we got it up to 32mph on the flat. Endurance wasn’t a problem either and it gobbled up hills, even with a full feeder on the back.

All the extra weight from the batteries meant the Eco Charger’s impressive torque in low range could be put to the ground. In fact, in low range it’s still capable of decent speeds and it’ll pull almost anything in sight – including the non-compliant Kawasaki.

Weighing in at 400kg, it cuts a burly figure. Unless you consume tins full of spinach – Popeye style – you don’t stand a chance of man-handling the Eco Charger. But that weight doesn’t seem to affect handling and certainly helps when it comes to grip.

Restricted by the chassis, the turning circle was pretty poor, especially when compared to the Kawasaki. It might mean there’s a bit of shunting to be done when it comes to operating in tight spaces. 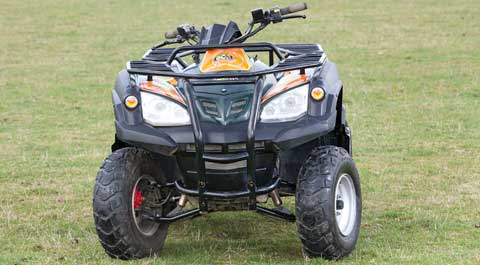 A single swing-arm provides the cushion on the back. It’s set further in than you might expect, leaving room for the two batteries to be tucked away in the rear.

Braking is adequate, too, although the parking brake is a little rudimentary and could do with some refinement.

It all boils down to cost. At £7,000, the Eco Charger is 15-20% dearer than petrol-powered equivalents. There are savings to be had, though. Servicing costs are reduced, and fuel savings can equate to over £1,000 a year. But replacement batteries are costly and should be considered when doing the maths.