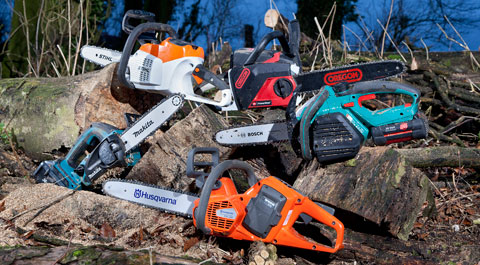 All the main players in the world of woodcraft are now offering cordless, battery-powered chainsaws. But what’s wrong with a good two-stroke burner?

Well universally they’re all saying there’s demand for cleaner, greener and quieter equipment. People working in built-up areas want a tool that won’t wake up the neighbours and that doesn’t require the messy, smelly mix that our petrol-powered stalwarts like to guzzle.

But do they have a place on the farm? Nick Fone put the five most recognisable names through their paces to find out what they could offer and why you’d want to buy a battery-powered chainsaw. 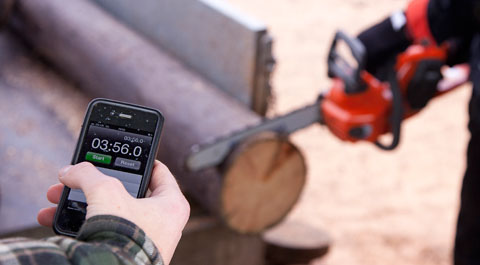 With each saw pulled out of its box and the associated gubbins strewn around the kitchen floor, it was just like Christmas morning, in fact probably more exciting. But there was no time for fun – we had a job to do.

Getting the saws assembled gave us a good chance to assess build quality and ease of adjustment. Then, with the batteries charged to the max, we got down to business.

To give each saw an equal chance of proving its performance we set about ‘The Telegraph Pole Test’.

Lengths of creosote-treated timber once destined for gate-hanging duties were retrieved from the back of a darkened shed and we set about turning them into neatly crafted slices as quickly as possible. Each saw was timed for how long it ran for before the battery went flat and the total number of cuts were then counted. That way we could see just how fast they would cut and how much stamina they had in the Lithium Ion power-packs.

With the (un)scientific bit out the way, the contenders were passed over to a team of tame tree-surgeons for rigorous scrutiny. 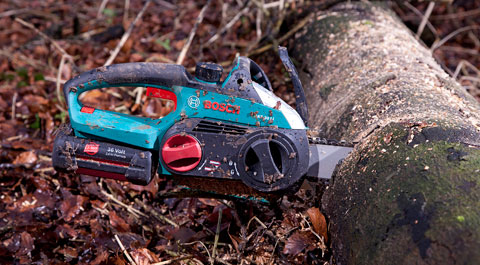 Features: Despite its Fisher Price appearance and being held together with woodscrews, the Bosch is well-designed and, with its microwave dial-style chain tensioner was the easiest to adjust. An awkward trigger release made it tricky to get going.

Performance: It was up there with the big boys on battery life and pretty much matched the Huskie and Oregon for speed and total number of cuts.

Number of cuts between battery charges: 20 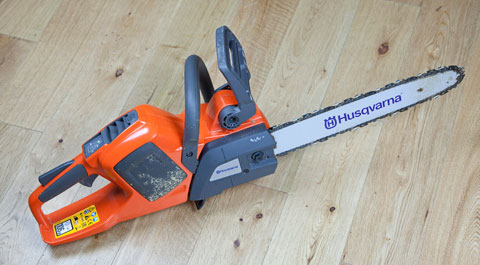 Features: The Husqvarna feels much more like a grown-up chainsaw and has a proper trigger-grip which helps a great deal in that department. It has a proper on/off button too whereas all the others rely on the chain-brake for safety. ‘Eco’ mode slows the chain speed to elongate battery life, in theory. In reality we found no difference, just that the saw was slower to cut.

Performance: The Huskie boasts the highest chain speed by a long shot and that makes it the fastest to cut. However it also drains the battery pretty sharpish so that the total number of cuts between charges is only average.

Number of cuts between battery charges: 22 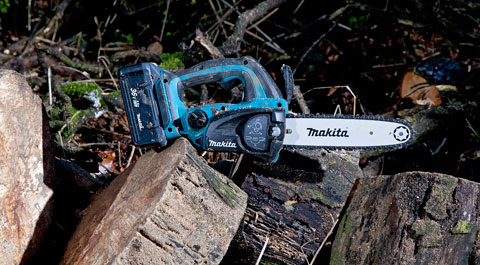 Features: The Makita was the only top-handled saw on test (licensed users can in theory use it one-handed for climbing). As such it was the lightest.

Performance: With its small battery, the little turquoise saw manages the fewest number of cuts between charges. However it holds its own when it comes to the time taken to chomp its way through the telegraph pole.

Number of cuts between battery charges: 10 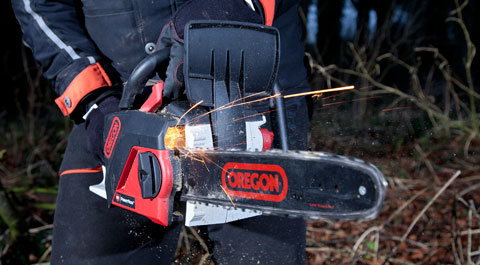 Features: Like the Stihl and the Huskie, the Oregon looks and feels like a conventional saw. It’s the heaviest on test due to its chunky but relatively low-powered battery pack. However it has an ace up its sleeve – an auto-sharpening chain.

So when you’ve hit a fence staple or chewed up some dirt it’s just a case of pulling a lever to engage the sharpening stone and giving the trigger a squeeze for couple of seconds.

After a brief shower of sparks it’s back to work. But there is a cost – you’ll need a new chain every 10-20 sharpenings (approx. £20). Chain tensioning is the old-school two nuts and a screwdriver set-up.

Performance: The Oregon was the slowest to cut and had a tendency to stall but battery life was good meaning that the total number of cuts it made was bang on average.

Number of cuts between battery charges: 20

Features: The Stihl feels most like a proper petrol-powered machine. For those that don’t want the weight of a battery in their hands there is a belt pack that connects to the saw with a lead but we found it unbalanced the set-up and had increased the potential for accidents.

Performance: The Stihl blew the competition out of the water when it came down to the nitty-gritty. It had by far the longest lasting battery and managed over double the number of cuts to the nearest competitor before it went flat.

It also boasts the second fastest cut time on the telegraph-pole test. However, without the German firm’s fast-charger, at 2hours 45mins, battery top up time is the slowest.

Number of cuts between battery charges: 38

Whether you should buy a battery-powered saw, we’re still not sure.

These sparky but expensive gadgets will never take over from long-slogging two-stroke favourites but might find favour for lightweight tasks around the farm.

They probably lend themselves most to jobs like fencing and hedge-laying where you’re picking up and putting the saw down on a regular basis and not having something buzzing away at your feet like an angry hornet is music to the ears. They are true stop-start machines.

While we probably wouldn’t opt to throw our pocket-money at any cordless saw, with guns to our heads, we’d probably go for the little Bosch – it’s cheap and gutsy. 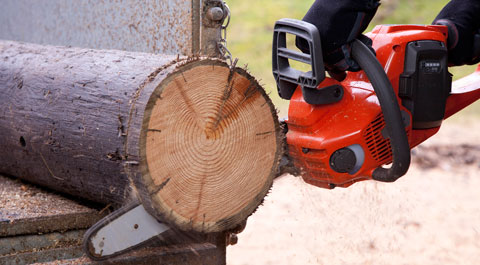