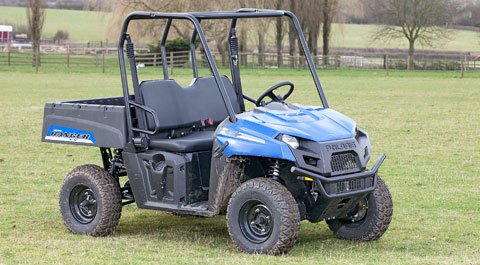 They may be wonderfully eco-friendly, but can electric ATVs and farm buggies cut the mustard when it comes to doing a job of work? James Andrews, David Cousins and Oliver Mark put them to the test on a Warwickshire sheep farm.

Unless you live in one of the remoter areas of equatorial Africa, you can’t fail to have noticed the relentless advance of electric vehicles.

So it’s no surprise that electric versions of ATVs and farm buggies (aka utility vehicles) are quietly edging their way into agriculture. There are now at least three electrically powered farm buggies on the market, plus one electric ATV – and more are in the pipeline. We were doubtful whether these vehicles were truly cut out for farm use. But the only way to find out was to get them on a farm, give them some jobs to do and see how they performed.

Our group consisted of the following (click on the links to see the full report on each vehicle):

Made in the UK by a Northumberland vehicle specialist. Launched in 2011.

Made in the USA by the well-known manufacturer of ATVs and farm buggies. First launched in 2009.

Built by a small farm-based firm near Ilfracombe in Devon. The Ecocharger was launched at the start of the year.

We used the diesel version of this Spanish-made farm buggy as a benchmark to compare the electric versions.

• We measured their top speed on a long grass hill, both on their own and pulling a full Logic Snacker sheep feeder.

• We ran the different machines more or less continuously to see how long they lasted for. This was not a scientific test, but very revealing nonetheless.

How did they do?

A: Nothing. Petrol-engined ATVs are powerful and pretty quiet. But for heavy users the fuel bills can be substantial and those prices are only going in one direction. Plus you can spend a lot of time carting jerrycans about.

Q: And what about diesel-engines farm buggies?

A: Red diesel is almost half the price of petrol and being able to fill up from the farm fuel tank is great. But some of the vehicles can be pretty rattley and noisy.

Q: I can’t imagine an electric vehicle goes at anything more than a snail’s pace!

A: Yes, we thought that would be the case too, but were pleasantly surprised. Electric vehicles generate peak torque as soon as you squeeze the throttle so they take off just as quickly as a petrol or diesel one. In fact the Ecocharger had performance characteristics not much different from a petrol ATV.

Q: Mmmm… what about top speed?

A: Yes, on the basis of the machines we tested, their top speeds are not as high. The Polaris managed 25mph, the Avid 22mph and the Ecocharger 36mph. By way of comparison, the diesel-powered Ausa managed a 43mph top speed.

Q: The batteries can’t last very long if you’re making a lot of use of the vehicles?

A: We expected that too, but were pleasantly surprised. After a day of running around with them, they kept going pretty well. They don’t suddenly peg out like a petrol engine that’s run out of fuel – they just get slower and slower.

Even if you’ve come to halt, you can sit there for 10 minutes and the batteries will get their breath back a bit and they’ll carry on for another 20 minutes.

Q: What sort of batteries do they have?

A: Nothing high-tech. These are lead-acid, deep recycling batteries, ie they can be discharged virtually fully without losing their power-holding ability. The Ranger and Avid have eight car battery-sized units and even the Ecocharger squeezes six batteries into its fairly titchy frame.

Q: How long do they take to charge?

A: This varies a bit from machine to machine. The Avid needed X hours to get back to full charge, the Ranger Xhrs and the Ecocharger X hours.

Q: How straightforward is it to charge them?

A: All three electric vehicles have to be plugged into the mains. The Ranger has its own step-down transformer under the bonnet to take the 240v down to 96v, while the 72v EcoCharger and Avid both have a separate unit that lives outside of the vehicle.

Q: How many times can the batteries be charged before they have to be replaced?

A: It depends on how you use them. Generally speaking, the more you discharge a lead-acid battery the shorter its life. And even though these deep-cycling batteries are designed to be discharged more deeply that regular ones, they will still last better if you don’t flatten them too often.

Q: Is an electric ATV or farm buggy really cheaper than a petrol or diesel one?

A: It depends how enthusiastically you use it, the terrain involved and whether you’re pulling a trailer. But the book figures make interesting reading.

Here’s a quick example for someone covering an average of 10 miles every day for a year – ie 3,650 miles in total.

• The electric Ecocharger equivalent claims to be able to run for 40 miles on a charge. Over the 3,650 miles covered, it would have to be charged 91 times at a cost of 50p for off-peak electricity. That comes to £45.

• However, the fact that the batteries have to be replaced every four years has to be factored in, too. The cost of a set of batteries is £816, making for an annual cost of £204. So the total annual cost is £249/year, still somewhat lower on paper than the petrol ATV.

• Farm buggies running on red diesel at 72p litre, rather than forecourt petrol at £1.40, look like they should give the electric vehicles a closer run for their money. However, annual cost is still likely to be about £400 for the 3,650 miles.