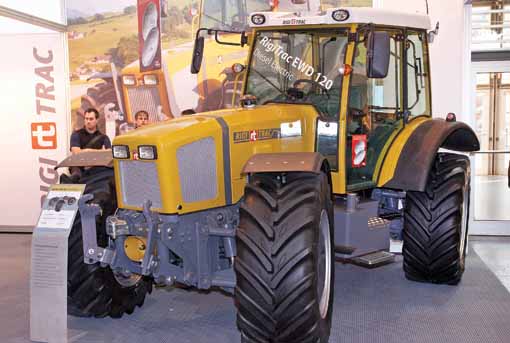 For anyone trudging through the vast halls at last November’s Agritechnica show, one trend was very clear. And that was that the time-honoured method of using a pto shaft or hydraulic oil in a pipe to transmit power from a tractor to an implement is about to be seriously challenged by electric motors and cables.

Several companies were showing electrically powered implements. German high-tech trailer maker Fliegl, for instance, had an electrically driven trailer axle on show and was predicting that ptos could disappear within 15 years. One Swiss tractor maker, Rigitrac, had even gone the whole hog with a fully diesel-electric tractor.

Why the sudden interest in electric drives?

Emissions regulations and fuel saving are the main reasons for the move. Engine makers are having to make further efforts to reduce particulate matter and nitrous oxides coming out of exhaust gas, as well as cutting fuel use. And electrically powered implements offer a good way of achieving that.

What’s the advantage of electric power over hydraulic power or a pto shaft?

Electrically powered implements avoid the heat, noise and inefficiency of hydraulic power and the nuisance (and danger) of pto shafts. Their highest torque is generated on start-up, and fuel savings of up to 5% are said to be possible.

Accuracy is also better. Electric motors provide a fan or pump with an almost infinite range of rotation speeds and the rpm can be changed in milliseconds. That means better flexibility and more precise application, as well as more accurate starts and stops.

Added to that, implement rpm can be set independently of engine speed, so high output can be maintained at low engine revs even when the engine is under load, leaving a greater proportion of engine power available for traction. 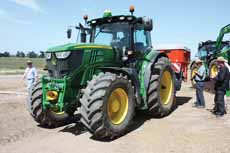 Can the electricity generated only be used to drive motors on implements?

No, there are other benefits to be had inside the tractor. Electrically powered engine auxiliaries can be tucked away in convenient places, for instance putting the air-conditioning compressor under the seat.

Similarly, hooking up to a close-coupled machine such as a fertiliser spreader becomes far easier, with just two connectors for a simple plug-n-play system.

Who are the frontrunners in developing electric-based systems?

John Deere is leading the pack. It has now moved on from its ground-breaking 7430E and 7530E tractors of 2008 by announcing that a new electricity-generating tractor will go on sale this year in the form of its 6210RE model (pictured above, right).

Belarus, meanwhile, impressed everyone back in 2009 with its 295hp tractor that generated 175kW of DC power, however details of how that project is progressing are unclear.

Same Deutz-Fahr is the latest tractor maker to join the front-runners. It is working alongside German gearbox builder ZF – which supplies 70% of SDF’s transmissions – to include a ZF Terra+ flywheel-mounted electric generator on its new 224hp Agrotron TTV 630.

Rigitrac’s EWD 120 diesel-electric tractor is probably still the most radical example of the genre. Developed in partnership with the Technical University of Dresden, the tractor’s 120hp Deutz engine is able to provide 85kW (115hp), which powers four wheel motors in the tractor’s hubs and is capable of 65kph.

Is an electric driveline more efficient than a pto or hydraulic system?

Electric drives are generally reckoned to be about 90% efficient in transmitting power. In comparison, most hydraulic drives reach only 75% efficiency. Pto shafts themselves may be efficient, but the belts and chains often involved are sometimes rather less good at passing on the torque.

The Rigitrac’s electric wheel-drives, for instance, run at 85% efficiency, compared with the 65-70% of the hydrostatic units used on the Swiss maker’s standard machines.

How much electrical power can a tractor produce?

Where does the power come from?

The generator can be fitted to the front or rear pto or be crankshaft driven. Deere and Same Deutz-Fahr are both pursuing the latter, whereas there are several companies looking to develop pto-powered generators capable of outputs up to 100kW (136hp). 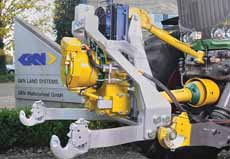 Manufacturing giant GKN Walterscheid is one of these and says its EPower generator (pictured) can go on the front or rear pto. It is able to provide 20kW (27hp) of electricity at a pto speed of 650rpm, or up to 100kW (136hp) at 900rpm.

As well as the generator unit, an integrated cooler and heat exchanger keeps the electronics cool.

What’s the advantage of attaching the generator outside the tractor?

Pto-coupled generators offer the flexibility of producing electrical power on conventional tractors, however the extra length and bulk of the generator can be a nuisance.

Are some implements better suited to using electrical power than others?

Also suitable are implements that have drives that sit far away from the back of the tractor and involve ungainly chain-and-sprocket set-ups. Here, plumbing in an electric motor could be done much more flexibly.

Same Deutz-Fahr is currently trialling the Agrotron with a Fliegl trailer and Amazone drill to assess the system’s performance.

How about more power-hungry implements?

These are likely to be driven in due course, but a power harrow can sap up to 30hp/m depending on ground conditions. Lemken has developed a prototype with an electric motor for each drive, which was shown at Agritechnica.

Hydrostatically driven self-propelled sprayers and combines could also join the revolution. Complex drivelines could be simplified to reduce the number of belt and idler components, and the machine could run at lower rpm while retaining maximum speed.

What about other parts of the tractor?

Electricity can power pretty much anything. On-board items like fan drives and coolant pumps no longer need to be belt and pulley based, so speed can be controlled according to engine temperature. This is more efficient than the viscous-coupled units and ensures that while there is no lack of cooling, the fan does not have to run when it’s not needed.

The air brake compressor can also be electrically driven, kicking in and out as required by way of a magnetic clutch to engage the drive when the pressure in the circuit drops.

Similarly, the air conditioning compressor can be tucked under the driver’s seat, and because it is independent of the engine speed, can reach maximum cooling capacity even when the engine is idling.

Are there any health and safety issues associated with tractors equipped with an electric drive?

With 400v of electricity being supplied, there’s no avoiding certain health and safety implications. Work on the machines will no doubt be restricted to those trained to do so. However, conventional pto shafts are not without their dangers, and electric drives certainly avoid hunting for those elusive grease nipples.

The extra equipment fitted to these machines will add cost. Although the price of the Deere 6210RE hasn’t been announced yet, it’s likely to be more expensive than standard 6R series models. But Deere is confident that the lower running costs will give a payback in a relatively short time.

What sort of time-frame are we looking at?

Deere’s 6210RE will be available from May 2012 across Europe, although a price hasn’t yet been confirmed.The limited electrical power output of the Deere and other tractors mean they are likely to remain pto-equipped for the foreseeable future. Particularly where brute force is needed, like power harrows and muckspreaders.

Same Deutz-Fahr suggests its Agrotron TTV 630 may be available in 2014, while the GKN generator is likely to be launched by the end of the year.