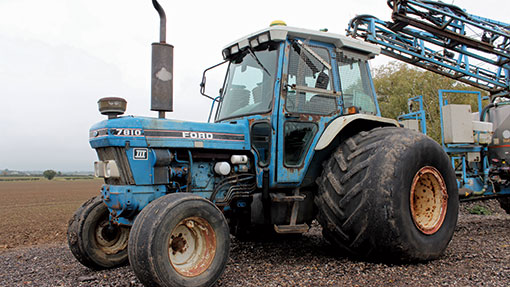 In a return to our series looking at veteran farm machinery still in action, Oliver Mark visits Essex arable farmer Gary Ferguson, who is getting his money’s worth from a Ford 7810.

The two-wheel drive Ford 7810 had a great power-to-weight ratio and we were looking for a field work tractor that wasn’t too much of a lump. We’re getting almost 100hp from a 3.5t tractor, which is hard to come by these days.

We bought it via Doe’s from a drainage company in 1994, where it had been given some pretty tough love for its first 2,000 hours. However, we thought it was good value at £13,200 and it suited us nicely because at the time we ran a lot of Fords. In the mid-1990s we switched to John Deeres, but the 7810 was given a stay of execution because it was such a solid performer.

Nowadays it’s married to the trailed sprayer year-round. We run an old 24m Billericay Farm Services sprayer, which we picked up for £6,000 from a local farm 10 years ago.

It is semi-mounted to the tractor and attaches to the tractor through its closed-hook link arms, so it’s a pig to couple-up – it’s easier to leave it attached all year. That way, we can leave the pick-up hitch and drawbar in the workshop, which saves wiping out the heads on ripening crops later in the season.

This year it has done all of the pre-ems, and it’ll do the rest of the sprays and liquid fertiliser across our 240ha. Occasionally we’ll get it on the small square baler, too.

You can probably tell from the picture that it hasn’t been treated to much in the way of new rubber. It still spends the autumn on Terragator tyres we got for it in the early 1990s and, because the tread is practically non-existent, it hardly makes a mark on the cultivated land. The sprayer also runs on duals, though I had to put new tyres on last year and the chunky tread picks up a bit more soil than we’ve been used to.

We also manage to avoid doing much road travel because you can get to most of the fields without using the road. That’s a good thing – it’s wide, slow and bouncy on the tarmac.

It’s showing its age now, although that would be quickly solved with a lick of paint. Ford bodywork from early-1990s tractors wasn’t great anyway, and some of the bad metalwork is the result of its early days at the drainage company. Generally, it’s been pretty low maintenance, though.

It’s had three clutches – a pretty easy replacement job on the 7810s – and two water pumps. The only major problem was the gear linkages, which needed fixing three years ago when it couldn’t find reverse. That’s the only big bill we’ve had from it.

However, it’s got to almost 10,500 hours without us touching the engine. It probably helps that it’s got a six-cylinder lump up front – it runs slower, cooler and more frugally than the four-pot 7610.

If the engine did go pop it wouldn’t be such a big problem, anyway – the all-mechanical arrangement is far easier to fix than the fleet of Deeres we run alongside it. 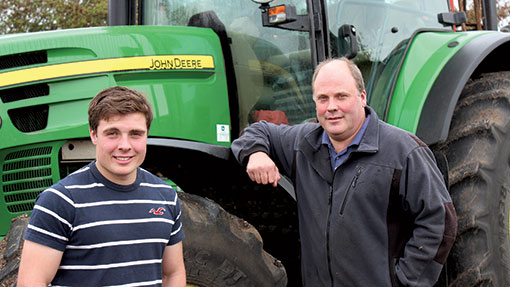 Why run such a high-houred tractor? Ever sell it?

It has cost us very little in depreciation and would be expensive to replace. When we do it’ll probably be a small second-hand Deere, just because it makes sense to run a fleet of same-brand tractors. Either way, the 7810 was a bargain that owes us absolutely nothing.

We’re resurrecting our series looking at high-houred frontline machinery. If you’re running a machine that has racked up the hours then get in touch – it could feature in Farmers Weekly. Just email some basic information and contact details to oliver.mark@markallengroup.com.