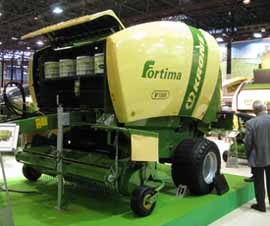 Krone’s Fortima V1500 baler is a face-lifted version of their Vario Pack 1500, with new fibreglass body panels, a faster pickup and updated electronics.

The Easy Flow pick-up reel has filtered down from higher-end models and is 30% faster, meaning forward speeds can be increased.

Larger sprockets have also been added on the drive-train to reduce noise and the bale chamber has been tweaked to offer slightly higher bale density.

It is being released in France this year, but the company says it could make it to the UK market soon after.