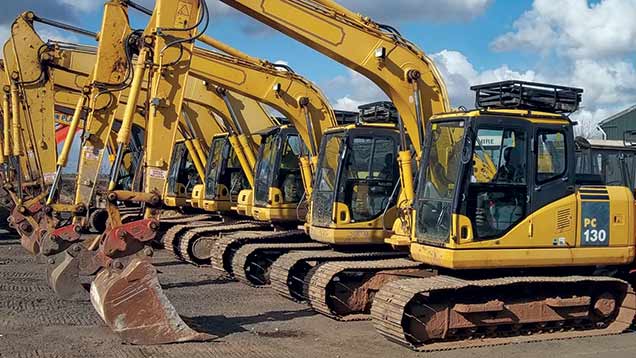 The arable farming closed-season is all about keeping busy, and having a digger in the back of your machinery shed opens up a whole world of opportunities.

Unless you’re growing paddy rice, sorting the ditching and drainage should be a wintertime priority. Laying farm tracks, digging foundations or even hauling down old buildings are other occasional farm tasks that would be hard work without an excavator.

See also: Work boots on test – which are the best?

In the past you might have expected to ask a neighbour if you could borrow his old, mossy-windowed JCB 3CX, but such machines are increasingly being chopped-in for tracked 360 equivalents.

In 5t, 6t and 8t guise, these provide far more reach than a backhoe loader. They’re also less likely to get stuck than their wheeled cousins, particularly where winter ditching is concerned, and are far easier to manoeuvre, too.

How to choose a used model

Which one should I buy?

Leafing through the classifieds will flag up countless different used excavators rated from as little as 1.5t up to more than 13t. Anything up to 3t is generally classed as a mini excavator and machines from 5-8t fall into the midi category.

The benefit of the 1.5t machines is that you can haul them round behind your farm truck. But for most farm jobs, such as ditching, groundworks and pulling out tree stumps, they’re a bit underpowered. They’re also far too easy to tip on their side.

Farmers with smaller jobs in mind will probably be satisfied with a 3t machine, but according to Clements Plant the most popular models for agricultural work are between 5t and 8t.

That’s because they’re still fairly compact, have decent reach and don’t cost that much more than the smaller models. They’re also usually on rubber tracks – which means they don’t chew up roadways – and can be easily moved around on a small low loader.

Unlike bigger excavators they have the added benefit of zero tail-swing, making you less likely to clobber buildings or wipe out fence posts.

Popping into a dealer to order a new midi excavator could leave you as much as £60,000 lighter in the pocket. That’s a bit steep for most farms where even the harder-worked machines average about 200 hours/year. So it’s worth dipping into the used market.

But beware. A lot have had a challenging start to life, either as a construction firm’s own machine or as part of a plant hire fleet. Both tend to get flogged hard, but the ex-hire machines will have had the toughest time of it by far.

There are also plenty of pinched machines out there, as well as a few phoney adverts for machines that don’t exist. That means it’s crucial you go and look at a machine before you start wielding the chequebook.

Search around and it’s possible to pick up an older 3t excavator for about £7,000. According to Clements that’s about as cheap as they get, unless they are in really poor condition.

Moving on to the bigger stuff, the base price for a 5-6t digger is about £10,000. For this, you’re likely to get a machine that’s either a bit long in the tooth or has just emerged from a hard life on a hire fleet.

The main brands to look out for in this size bracket are JCB, Kubota, Cat, Case, Takeuchi and Hitachi.

Farmers tend to gravitate towards JCB as they know the name, but according to Clements, there’s not a lot to pick between them – buying on condition and service history is more important than brand.

What to look out for when buying used

Most 5-8t diggers come with rubber tracks, which are a good place to start your checklist. Worn rollers and pointed sprocket teeth can tear the tracks apart and if they look tired after just 2,000 hours then it’s pretty likely that the machine has been abused.

There’s no reason why they shouldn’t last well beyond 5,000 hours, but it’s important to check they’re tensioned correctly. If they’re too tight you’re at risk of snapping the steel band. The rubber will perish pretty quickly once that happens.

Replacement tracks will cost £1,000-1,200, but unless you are desperate for traction there is no reason why you shouldn’t buy a machine with 50% wear on the rubber. Never replace one and not the other, though – it will mean the unit won’t track straight.

Give the engine, cooling and hydraulic systems the usual once-over. Start with the oil – check the level and scout about for any leaks.

Also check the filler cap – if it’s been tampered with recently then the seller might have quickly topped up to hide a lack of maintenance. Fire it up as well, ensuring the engine is cold before you turn the key.

The engine constantly drives the hydraulic pumps and relies on the pressure relief valves a lot of the time. Check the circuit for any weeps and then get in the cab.

Start by operating all of the hydraulic functions. If it is slow to move then there could well be a blockage somewhere in the system.

Also drop the bucket on the deck and push until the digger body lifts in the air – if it hasn’t got the power to lift itself then something is wrong.

Pins and bushes in the digger arm will wear out, particularly where the arm has been used to bash stuff. Check for slop in all the horizontal joints by lightly resting the bucket on the ground and slowly slewing the cab.

Watch the different joints flex as you gently wiggle the machine to identify any that are particularly worn. Keep a close eye on the kingpin and then jump out to inspect the dipper for any cracks – it’s a regular troublespot on 5-8t machines.

A hard life on construction sites can take its toll on dozer blades, which can wear down the metal to the heel. If that’s the case, use an angle grinder to chop of the last of the blade, then weld on a new one.

Remember to tack each end first and weld a short length at a time to stop the whole lot warping. A replacement will cost you about £250.

If you’re machine-proud then cosmetics are another thing to consider. Chipped and scratched paint is to be expected. Broken glass, worn seat fabric and still-visible sign-writing also comes with the territory, but most is pretty easily fixed and can quickly increase the value of the machine.

Excessive damage hints at some tough treatment, though, so be wary of more problems under the skin.

The Clements family have been buying, refurbishing and selling diggers for more than 57 years from their 200-acre farm in Kirton Lindsey, North Lincolnshire.

At any one time they have more than 120 machines in stock from JCB 3CXs and 20t excavators to telehandlers, dumper trucks and tractors. Some are sold back in to the UK construction industry, some are shipped abroad and an increasing number are making their way on to farms.

To maintain quality, Clements sources all of its machines from UK construction and plant hire firms and gives them a thorough going over in the workshop.

This is manned by seven full-time mechanics that carry out anything from servicing and valeting to full engine rebuilds, hydraulic system overhauls and resprays.

A few machines are sold to farmers in “as-seen” condition, but most will choose to get them overhauled.

“Often farmers will come to us with a £10,000 budget, but once they have seen a properly sorted machine they usually end up spending £15,000 or more,” says Mr Clements.

A few people also justify shelling out for a better machine by hiring them out to neighbouring farmers or doing a big of contract digger work on the side, he says.