Here on the Machinery desk at Farmers Weekly we love a farm invention. Every year our Farm Invention competition is flooded with entries from farmers who have come up with clever solutions to everyday problems.

We’re not alone, either – our friends at Farm Show Magazine in the US regularly serve up 40 pages of wacky, practical or just plain brilliant ideas from individuals and small companies, covering everything from combine attachments to homemade ride-on lawnmowers and animal incinerators.

To get a flavour, the magazine’s editor, Mark Newhall, sent us a selection of the best.

Header specialist Geringhoff has developed an integrated air system option on its range of TruFlex Razor draper headers, which is designed to minimise losses as the cutter bar comes into contact with the crop.

Key to this is a stream of air flowing across the cutter bar that carries seed on to the draper belt and into the combine. Geringhoff marketing manager Joel Dennis says this innovation has cut field losses to almost zero. 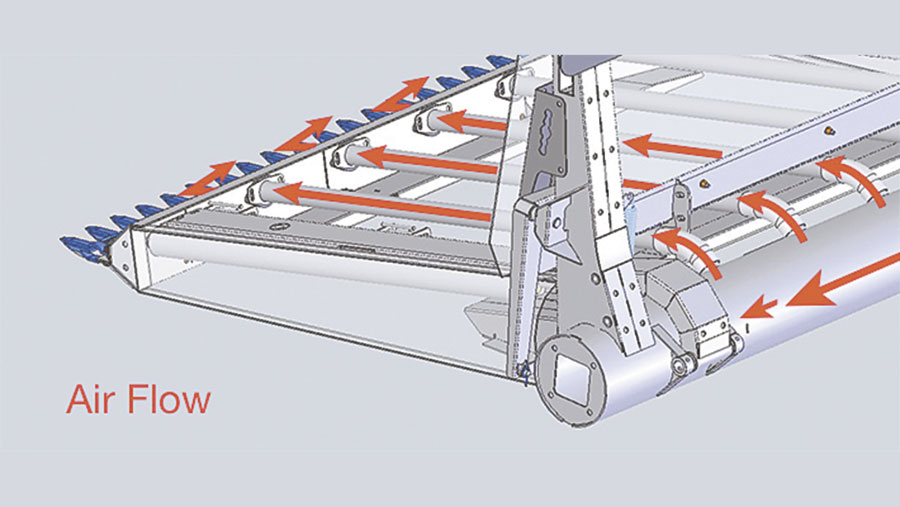 The system captures grain that might otherwise fall to the ground and be left on the field surface, to chit and grow.

A distribution tube extends across the back of the header platform, feeding air into smaller tubes that reach down to the knives. This helps to gather a majority of the grain, even in over-ripe crops where seed shattering is inevitable.

It fits to the company’s 10.6m or 12.3m headers, which are different from all other draper models in that they have a flexible frame, cutter bar and reel that allows them to follow uneven terrain.

The cutting bar can flex up or down by 12in across the full width of the ground-hugging header to gather lodged and small-seeded crops, with height control allowing each frame section to follow contours independently.

Having an extra pair of hands to help you shift heavy loads on to the back of a pickup can save your back – but also cost you money in wages.

However, a new electric tailgate made by Handy Gate uses the existing tailgate and power from the truck’s standard seven-pin trailer plug to easily raise loads from ground level to the pickup bed. 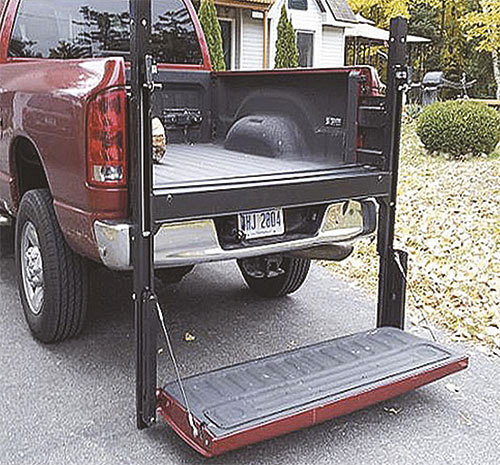 The unit comes with a 10in floor extension to accommodate the two tall lift assemblies which are fitted in place of the tailgate’s hinges, allowing the tailgate to hinge open and shut as normal.

Each lift unit is operated by a PCB motor, with an on-off switch located on top of the assemblies. Dual motors keep the tailgate level, with each assembly working from a screw shaft with ball bearings that roll along the threads.

According to the company, the tailgate lift can easily lift loads up to 450kg, which makes it ideal for moving generators, motorcycles, wacker plates or multiple chemical cans, along with other materials.

The unit doesn’t touch the pickup’s bumper or require any modifications to the body and can be fitted in minutes using only a screwdriver and ratchet, says the firm.

A new monitoring system automatically detects broken shear-bolts on cultivating legs and lets the operator know instantly when one snaps and needs replacing. 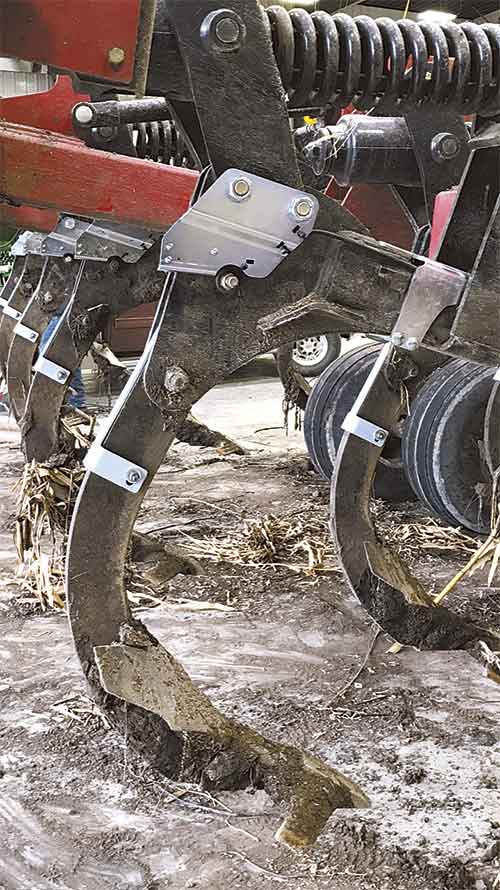 The patent-pending system consists of an in-cab LED monitor, wire harnesses, mounting brackets, sensors and magnets. It can be installed on conventional cultivators or muckspreaders that have shear-bolt protection.

A simple bracket bolts on to each leg along with the sensor, magnet and wiring, so no fabrication or welding is necessary. The sensor detects when a leg is out of its correct position and shows a lit LED and an audible alarm on the in-cab monitor. Handily, once you install a new shear-bolt the system automatically resets itself.

A new electronic depth control kit made by Graham Equipment, based in Sterling, Colorado, uses an electric actuator and self-contained hydraulic cylinder to offer more responsive and accurate pressure than using conventional springs. 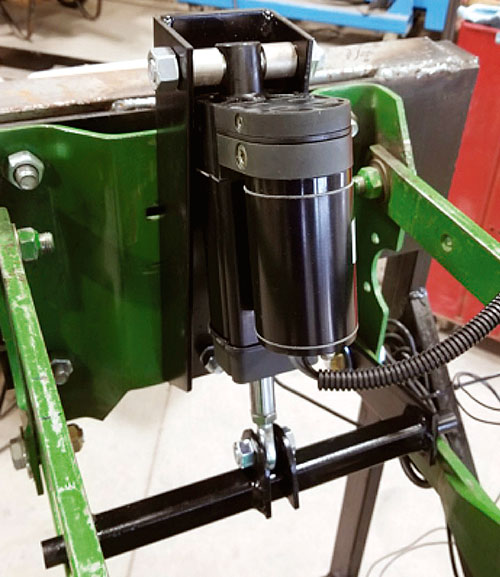 The unit can be retrofitted to any planter, slotting into the place of an existing spring. It contains 4in actuators that pressurise the hydraulic cylinders, creating the downward pressure.

If the kit is used through the firm’s Command Pro touchscreen monitor the system can be controlled wirelessly using the same power supply, with a control board relaying information to the cab screen.

We’re told that each system can offer more than 450kg of pressure and the responsive actuators can alter this by up to 45kg at a time.

An adjustable opening gate made from galvanised steel tubing could be just the space saving device needed in cramped older dairies or lambing pens.

Sturdy Built, based in Denver, Pennsylvania, makes gates that have an extendable end to adapt to multiple widths, so one gate can be used to shut off different sized gaps. 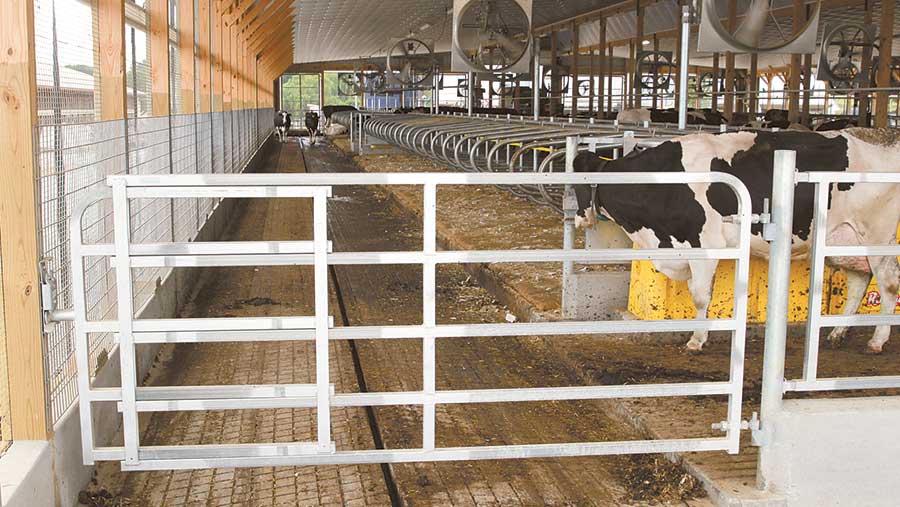 Gates are available in widths up to 20ft and are built to order at different heights and widths, with galvanised tubing used because it has a higher strength-to-weight ratio than other materials.

They mount on standard brackets so no welding is required.

A new wireless flow blockage sensor installed on Montag’s air delivery applicators is designed to monitor the placement of fertiliser on a seed drill.

Developed in Brazil by J.Assy, the Visum wireless flow blockage sensor was on display at the Iowa Power Farming Show in Des Moines, where it was installed on a Montag granular fertiliser applicator hooked up to a strip-till drill. 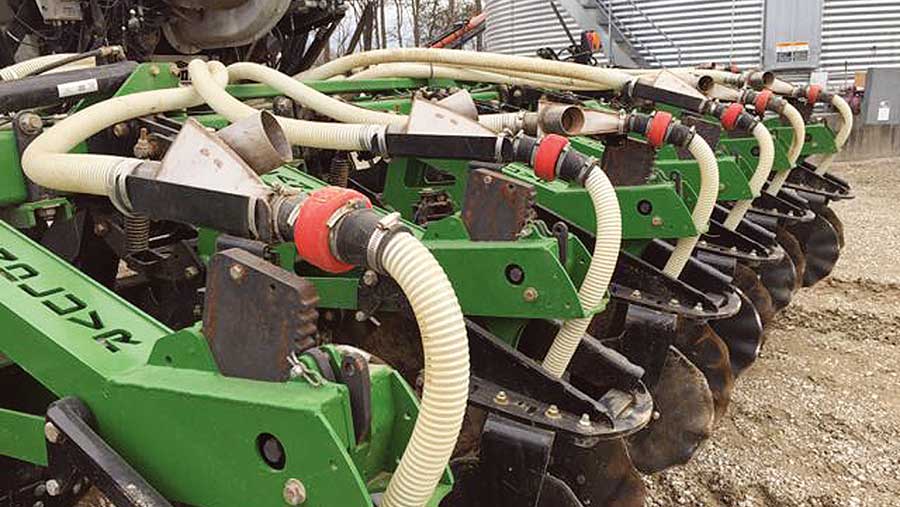 The donut-shaped monitor is installed in-line on each row and contains a sensor that sends out radio signals, powered by a lithium-ion battery. A rubber coupling on either side of the monitor clamps on to the machine’s hose, creating an air-tight seal.

“It’s virtually maintenance-free, which makes it much more reliable than wire-type monitor systems,” says William Montag of the family-owned company based in Emmetsburg, Iowa.

“The sensor is on only when it senses motion. When fertiliser stops flowing past it, a monitor in the tractor cab beeps and shows which row isn’t performing,” says Mr Montag.

He says the monitor has been used primarily to apply dry fertiliser in strip-till and no-till applications.

Al Hemerson’s new Finish Line Sweeps solve a problem that farmers may not even realise they have.

Modern cultivators and shallow subsoilers might lift and till the soil, but they also compact the soil below the working depth, he says. This resulting dense soil layer slows root development for deeper-rooting crops such as oilseed rape.

Finish Line Sweeps have a knife blade on the bottom of the tine that fractures the soil below just as the point and wings disturb the soil above. 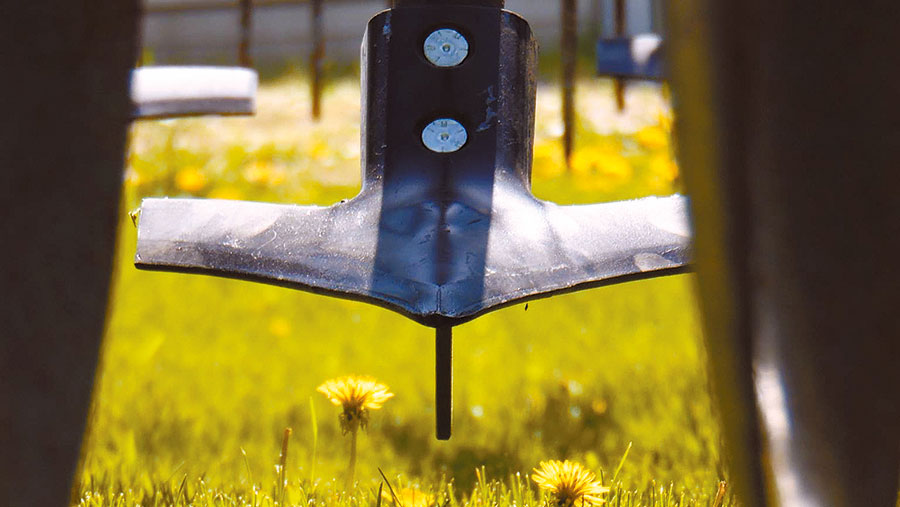 The under-blade cuts a path 70mm deep, which is enough to break the compacted layer and allow the hair-like roots to penetrate through.

Mr Hemerson says an upside-down jet aircraft’s tail is the best way to describe the sweep’s under-blade. Indeed he got the idea when driving past an airport.

“The backward-sweeping angle fractures the density layer, but it also slides up and over underground large obstacles without a problem,” he says.

Mr Hemerson tested the design on his John Deere 725 soil finisher and saw immediate results with vertical relief patterns in the soil. After getting a patent, he shared the idea with Wiese Industries.

They quickly adapted the concept to their Viper bolt-on sweeps, which are currently priced at $20 (£14).

Glen Wasmuth has a built a wheeled workshop that allows him to transport all his tools around the yard instead of moving the machine to the tools.

His wheeled treasure chest is filled with tools of all sizes, from spanners and grinders to a cutting torch, drill press and welder, along with a selection of machine parts. 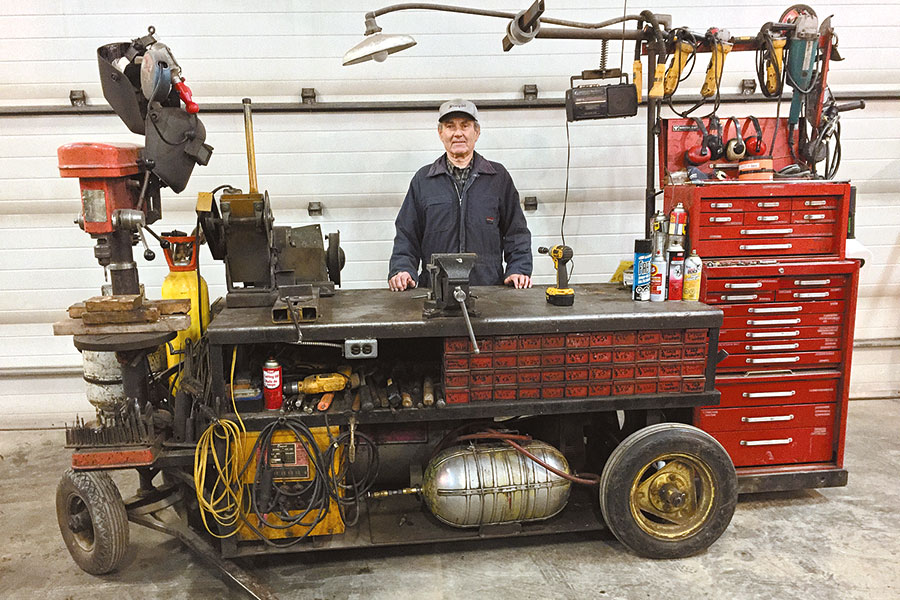 The worktop is made of 9.5mm steel and measures a huge 762mm by 1,820mm. The whole thing is  3m long and weighs more than a ton, but can be wheeled around the yard by one person, with the front axle spinning by 90deg to help with corners.

The front end has a 1.8m towbar with 8in wheels salvaged from a combine pickup reel, while the rear axle rides on 12in wheels from a John Deere weeder.

The drill press and cutting torch are mounted over the front axle, as are drill bits and a propane tank for the gas torch. The moveable workbench has its own circuit breaker box with individual breakers for the welder, 5hp compressor and circular saw.

A 20-drawer mechanic’s chest holding parts and tools sits at the rear end of the work area, with more drawers beneath the work surface.

An adjustable shop light mounted over the work surface makes sure jobs are well lit, while a rack over the mechanics chest carries welding helmets and angle grinders.