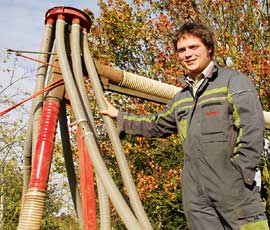 There just had to be a more efficient way of establishing a crop of winter beans than simply broadcasting seeds on the ground and then ploughing them in, reasoned Andrew Metson.

“It just seemed so wasteful in terms of labour, fuel and machinery to make a pass with an air drill and then have two more tractors pulling ploughs to put the seed underground,” he says.

Based near Ongar, Essex, Mr Metson not only farms in his own right but also offers a steel fabrication and welding service. Two years ago he set about building a bean drill which could operate directly on stubble, place seed at the required depth and leave a level surface – all in one pass.

For the cultivation element he chose to use a semi-mounted 4m Sumo Trio which was equipped with seven legs and had two rows of discs and a rear press.

“The idea was to use the legs as the coulters and feed seed pneumatically to steel tubes welded to the rear of the tines,” he explains. “I aimed to place seed at a depth of about 18cm.”

A seed hopper, complete with a metering unit and fan, was sourced from a scrapped Vicon pneumatic drill and this was mounted on to the rear end of the Sumo Trio. A hydraulic pto drive, which once powered a Chaviot sprayer, was brought in to power the fan unit.

“One of the biggest challenges was deciding how to drive the metering system which in its earlier life had depended on a land wheel system,” says Mr Metson. “With the hopper now mounted so much higher, running a wheel on the ground was no longer practical. Instead, I decided to take a friction drive off of the press.”

This arrangement was not without its problems though, due to the fact that the drive wheel was now rotating in the opposite direction – a problem he resolved by linking the chain to a second drive sprocket to reverse the rotation.

“Having done all that, I was really concerned that the jockey wheel would not find sufficient grip on the press wheel and the accuracy of the metering system would suffer as a result,” he says. “I considered welding some lugs on to the press and even filling the wheel with water to increase its weight, but it seems to be working well just as it is.”

And then, with everything sorted in the seed metering department, he realised that the positioning of the drive wheel meant it would be crushed when the implement was folded for transport.

“I had to now put the drive wheel on a telescoping shaft and use a hydraulic ram to pull it closer to the centre so the wings could be raised,” he says. “It was a bit tricky but it works.”

Hopper capacity was increased from its rather meagre 0.5t capacity to a more workable 1.25t by adding an extra 50cm (20in) of stockboard to it, along with a flip-over lid.

The whole seeder unit was designed to be a removable unit attached to the cultivator frame at just four points – two turnbuckles and two hydraulic couplers. Mr Metson says it takes about an hour to remove and about two hours to attach – the longer reassembly time needed to try and remember how it all fits together, he insists.

In the first design, seed was blown through a 15cm (6in) diameter pipe to a distribution head positioned at the front of the implement. From here, 5cm (2in) piping feeds the seed to the seven coulters.

“I made the distribution head using the two marker discs that were once employed by the Vicon drill,” he explains. “Held apart by a strip of metal welded to create a circular cavity, all it needed was for seven holes to be drilled into its base at regular intervals and the pipes attached.”

There was a major problem though and it all stemmed from having 20ft of pipe from the metering system to the distribution head. When the drill was raised on the headland, the pressurised hydraulic system also extended a small ram which raised the drive wheel for the seed meter away from the press wheel – so the flow of seed stopped during the turn.

Lowering the drill into work reconnected the drive and seed began to be metered into the feed pipe once more but the problem was that it was taking quite a measurable amount of time to emerge at the coulters and, by the time it had, the drill was well on its way up the field. Similarly, when arriving at the headlands, seed continued to flow for some time after the drill had been raised.

“It was a real problem for me and one which taxed the brain into the small hours,” he says.

Eventually though, the solution came to him. That was to use a system which provided a constant feed of metered seed to the front of the drill and, when the drill was on the headlands and seed was not required, be able to divert it back to the hopper.

“Even if I say so myself, it was a beautiful solution which meant the seed metering drive did not have to be interrupted and all it needed was a diverter flap which was pulled – by a rope – across when the drill was raised to make the seed flow back along a return pipe to the hopper.”

With this new arrangement, the time for the seed to arrive at the coulters was such that the drill could be raised and lowered on the headland mark rather than some yards before or after it.

So, how does the drill perform in the field? Working on medium loam which although reasonably dry, clearly had the potential to offer some challenges in wetter conditions, the drill sliced through the ground with some vigour using every one of the 360hp supplied by a Fendt 936. Set to run at a depth of about 20cm (8in), the operating speed was about 12kph.

Seed placement was good – the 170kg/ha seed rate clearly finding its mark and the finished surface, while not being a billiard table, was level enough for subsequent passes with sprayers and fertiliser spreaders. Headland turns were surprisingly nimble despite the extra length of the implement and, with the Fendt’s auto-guidance and headland management systems, operator input was relatively low.

Mr Metson reckons he has achieved what he set out to do, which was to cut the establishment costs of a crop which used to need three tractors, two ploughs, a 6m drill and three operators to achieve. 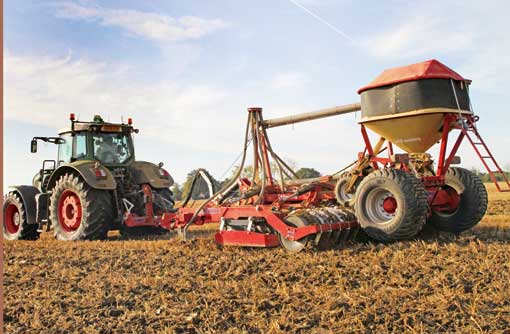 The Bean Machine in action. Based on 4m Sumo Trio, it employs a scrap Vicon air drill system – and no little ingenuity on behalf of its designer. 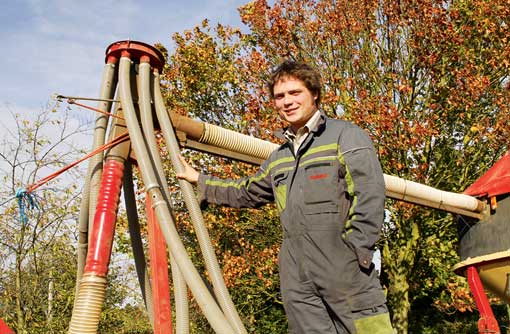 Andrew Metson with the latest update for his drill – a system which reduces the time it takes for seed to be delivered to the coulters when drilling restarts after a headland turn. 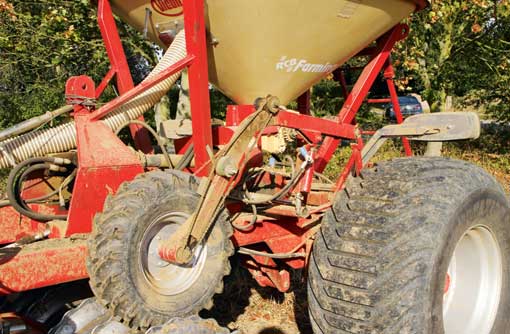 Drive for the seed metering unit is taken from a friction drive on the press. There was concern whether or not it would provide sufficient grip but all is well, reports Mr Metson. 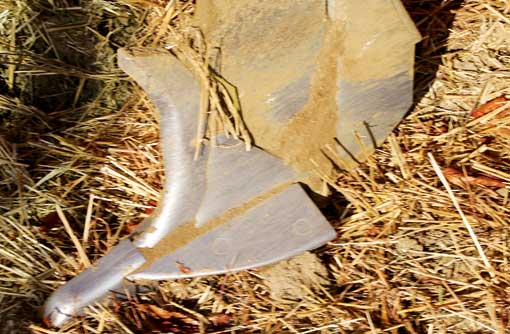 Seed is delivered via a tube welded to the rear of the cultivator leg which places the seed at a depth of about 20cm (8in).