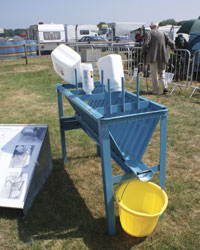 A home-made stand for draining empty pesticide containers (pictured) to make them acceptable for recycling won the top prize in the inventions competition at this year’s Suffolk Show.

The stand was designed and made in the farm workshop after a local recycling centre rejected containers that held small amounts of liquid. Terry Stinson, manager of two arable farms at Wickham Bishops, Witham, Essex, says the empty containers had been triple-rinsed following NRoSO guidelines, and the remaining liquid could not have contained more than a slight trace of the original chemical.

“The recycling centre rejected the containers because they could not be sure what liquid was in them,” Terry explained. “I wanted to avoid the same problem in the future so I tried to buy something, but as there was nothing available I designed a stand that allows the rinsed containers to drain completely. I made one last year which worked very well, so this year I have made one for the other farm I look after.

“It’s a very simple idea, but it seems to have solved the problem and the agronomist who visits the farms seems very impressed and says it would interest other farmers.”

The stands he built accept container sizes between 1 and 20 litres. After rinsing, the empty containers are arranged upside-down on the stand, allowing the contents to drain into a vee-shaped trough formed of corrugated sheeting.

In the bottom of the trough is a length of plastic gutter that carries the liquid into a bucket. This liquid, which may contain a small amount of very dilute spray chemical, is then tipped into the sprayer tank and used in the field.

Using the stand means the containers drain completely, leaving no residual liquid. When enough empties have accumulated, a tractor is driven over them to squash them and reduce the volume for transport, along with fertiliser bags and other waste, to a recycling centre.

As well as making the containers acceptable for recycling, using the stand also makes sure there is no pollution risk from traces of pesticide remaining in the containers, says Terry Stinson. 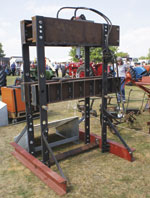 Runner-up in the New Equipment category of the competition was a heavy-duty press powered by tractor hydraulics for straightening or bending metal or pressing out bearings. Paul Dryden of Squirrels Hall, Walsham Le Willows, Suffolk, built the press using mainly second-hand items including a Volvo axle lift ram to exert the pressure.

The position of the ram on the frame can be adjusted for working on metal of different shapes and sizes, and a spool valve mounted on the frame of the press controls the oil flow to extend or retract the ram.

Contractor Stephen Saunderson won the Gadgets section of the competition with the jacking trolley he made for lifting the bottom track rollers on his crawler tractor.

He uses an elderly International Harvester BTD-20 tracklayer to pull a mole plough in the heavy clay soils around Heybridge, Maldon, Essex, where his business is based, and when the bottom track rollers need attention he previously lifted them manually.

“It’s an awkward job because the track rollers are heavy, and if you happen to squash your finger it can be very painful. I had a few mishaps doing maintenance work on the tracks and that made me think there must be a better way,” he said.

“I came up with the idea of a special jacking trolley that would take the weight, and I’ve been using it for years and no longer squash my fingers.”