After a constant battle to keep mud clear of the road during the wet silage season of 2012, contractor-cum-engineer Joe Williams decided he had to come up with a hassle-free way of getting the crop from the forager to the clamp. 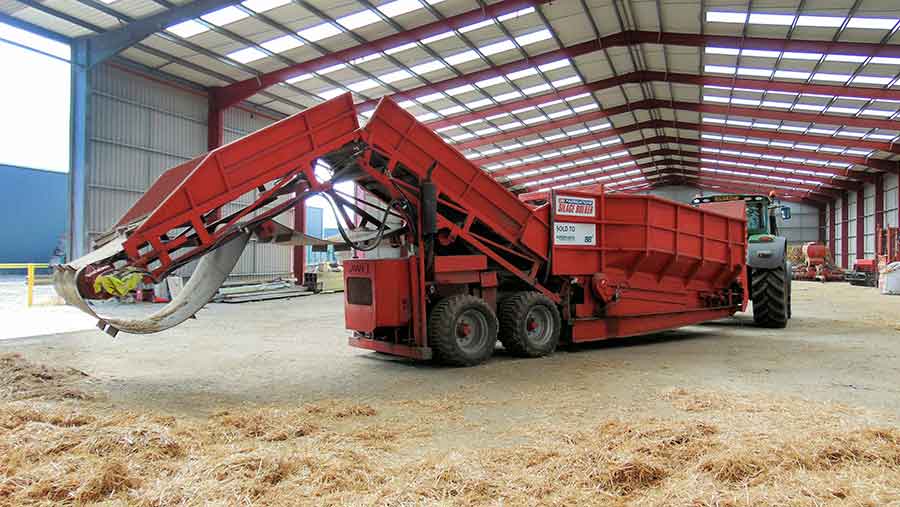 He set about designing a system that could transfer the material from fat-wheeled field trailers to road-going haulers with no risk of caking mud across the road and the potential carnage it could cause should there be an accident.

His answer was a large-scale conveyor that could potentially carry crops over hedgerows to waiting trailers.

“We shift a lot of maize for a company in Hertfordshire that supplies three anaerobic digesters, but we were constantly getting rained-off because of the risk of covering the road with mud,” says Mr Williams.

“Using parts laying around in the yard, we went from a fag-packet drawing to a working prototype with two weeks.”

The system is based around a 13.5m long, 2.8m wide conveyor. Initially it was powered by a tractor pto, but the design was rejigged and it was fitted with its own on-board 75hp Deutz engine to save tying-up a tractor to run it.

The air-cooled oil-burner runs a large hydraulic pump, which is used to power all the conveyors functions, including raising and lowering the ramps, the height adjustment and the motors.

Starting and stopping both conveyors can be controlled manually or via remotes kept in the cabs of the unloading tractors, though in reality it will be left to run all the time the forager is working.

Crops are tipped from the trailer into a big 25cu m receiving bay. The bay floor uses 180cm-wide Bunning muckspreader chains and slats to drag the material towards the main rubber-belted conveyor.

The main belt is powered by wheel motors pinched from an old 20t excavator and are plenty strong enough for the job, according to Mr Williams.

The conveyor itself is just about long enough to make the stretch over a 2.4m-wide ditch, and should also have the height to get over most fences. 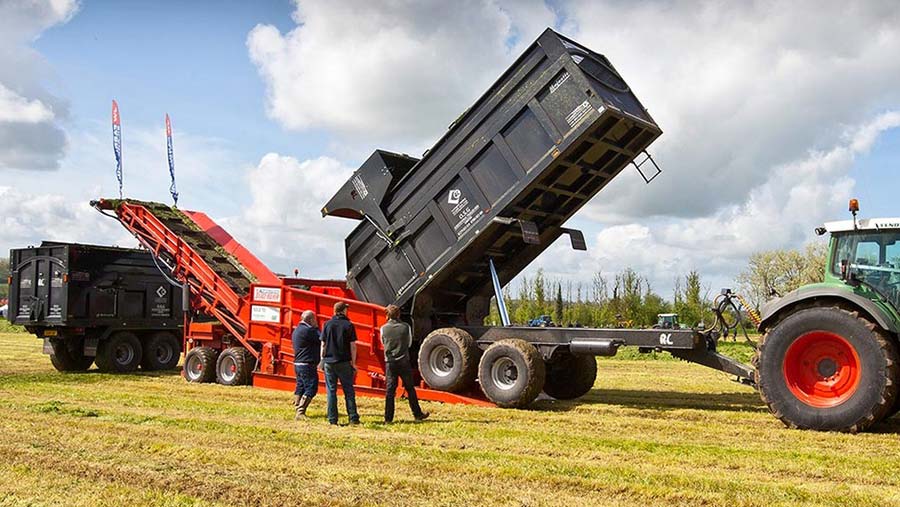 A full 14t load can be transferred in as little as a minute, which minimises the time spent away from the forager and potentially reduces the number of in-field trailers required.

A raised section in the middle of the ramps helps the drivers line-up their trailers accurately before tipping.

The rig is mounted on a proper wheeled chassis made from a recycled RSJ, which means it can be carted from field-to-field just like any other trailer.

The 3.5m-long end section folds down hydraulically for the road, which reduces the total length of the machine to 13.5m.

Mr Williams’ invention caught the eye of Isle of Sheppey-based contractors Burden Bros, which saw it as a useful addition to the contracting arm of the business.

Alongside its John Deere dealerships and 2,000ha farm, the company runs an extensive agricultural contracting operation that includes silage harvesting and agricultural construction.

The JW conveyor was seen as a useful insurance policy when harvesting maize for AD plants, as well as the various patches of grass and wholecrop silage.

In 2015, Burdens harvested 1,800ha of maize with an average carting distance of eight miles, so bad weather frequently played havoc with the firm’s harvesting arrangements. 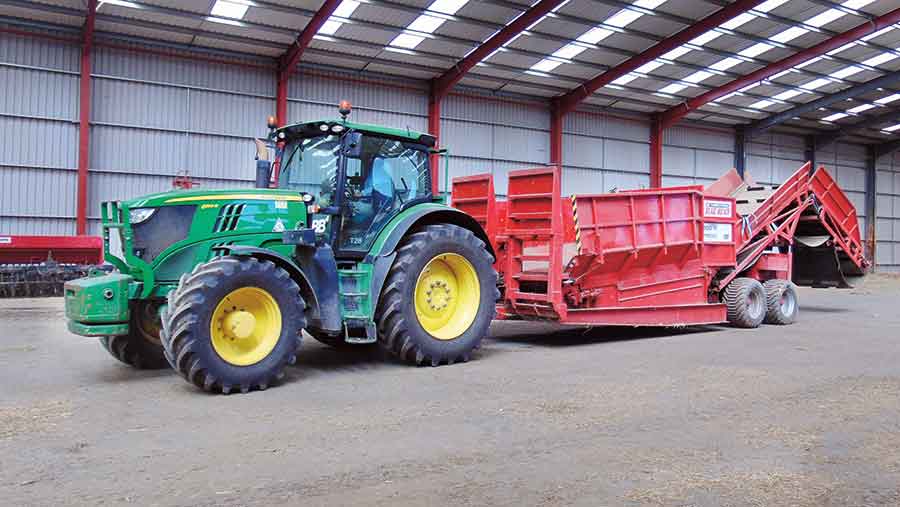 “We’re harvesting more and more acres of maize for AD plants but a lot of the fields are near to main roads, which means there’s a lot of focus on us keeping them clean,” says John Burden.

“Most of our customers want the job to be done within a specific window but, in sticky conditions, the road cleaner simply can’t keep up with the quantity of mud being flung from the flotation tyres.”

The company bought the conveyor system for £50,000 in 2015, and it had been on site for just three days before it got the silaging team out of trouble.

Last year it was used to process 3,000t and clocked-up a fair few road miles in the process.

Burdens usually charge customers a premium when it has to be used, or £500 per shift as an insurance policy, which helps cover the cost of the machine, plus the extra men, tractors and trailers required to keep up with the workload. 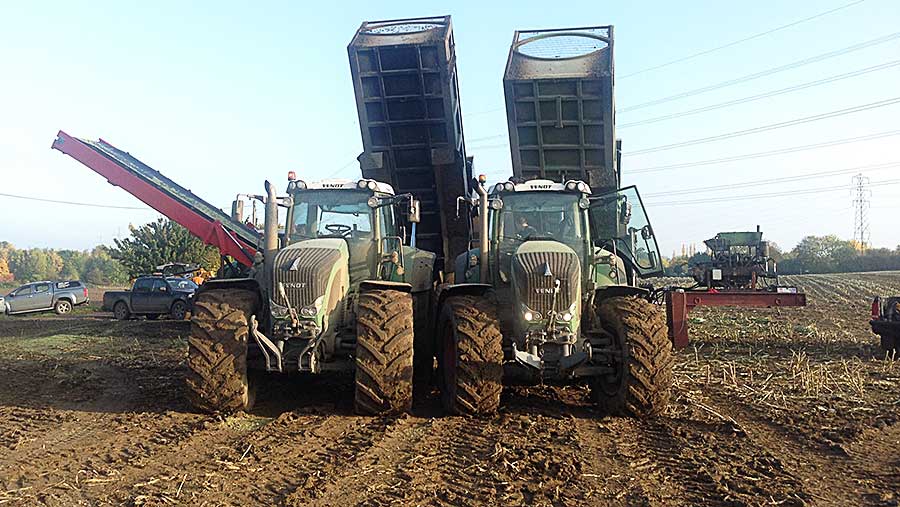 More tractors and trailers are needed to keep the John Deere 7080 forager moving while some sit in the queue to unload. It fills a trailer every three minutes, so can be tricky for the trailer men to keep up.

“Loading with the conveyor makes the whole process 40% slower,” says Mr Burden. “But on the plus side, we’re doing 60% more work than we would be without the conveyor.”

The other issue is the lack of crop compaction in the road-going trailer. It means that when the forager is filling Burdens 14-tonners, there needs to be a 16t trailer the other side of the conveyor because the crop ends up fluffy and loose.

On the whole, Mr Burden says he’s pleased with his purchase.

“It’s properly built, heavy-duty and simple enough to fix if it did go wrong. We’ll certainly be looking at the new version when it’s ready for the market.”

Mr Williams is currently putting the finishing touches to a new, larger model.

This time around, the trailers will tip from the side, which means two can be parked on the conveyor at once and should remove the bottleneck caused by the current machine as tractors and trailers queue to tip.

Get your Inventions Competition entry in

We’re looking for entries to this year’s Inventions Competition. It’s a simple process – all you have to do is send a few brief details about how the machine works, along with some high-resolution pictures and contact details to oliver.mark@rbi.co.uk. There are cash prizes for the winners and runners-up in each of the three categories – simple, intermediate and complex.