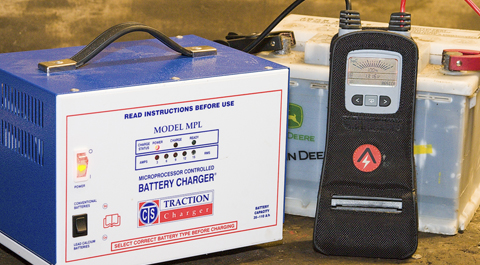 Uncertain over a battery’s state of health? Andrew Pearce explores two units that can diagnose and perhaps recover failing cells.

Nothing beats winter to show up a dodgy battery. Thick oil puts more load on the starter motor, cold weather slows internal chemistry, ailing cells can’t cope. But before you write off an old battery it’s sensible to be sure that it really has died – poor cranking can equally well stem from potentially reversible ageing.

Or, of course, it can come from a starter-circuit fault and be nothing to do with the battery – so checking the power storehouse is always the first step in solving a problem.

Which is where testing and – perhaps – battery recovery come in? Two very modern bits of kit – Argus’s AA500P analyser and Traction’s MPL – can diagnose and revitalise iffy lead-acid batteries. Not cheap and so best suited to larger farms or bigger contactors, they come with a pedigree and patent.

Traditional checks fall into two camps. The easy things – measuring battery voltage and sampling cell acid with a hydrometer – tell you about the battery’s chemistry and something of its state of charge, but not its capacity to supply current over time or to crank an engine.

The best options is to test a battery under load. That’s hard to do with storage types but easy for cranking ones – just try to start the engine, to use a clamp or prong-type test to apply a fixed load. Cells seem to boil or gas violently when stressed suggest that the battery is scrap.

Yet these ways to have their shortcomings. Apart from safety (sparking and explosion, exposure to fizzed-up acid) they take no account of the battery’s state of charge, while the sudden big discharge involved can further damage ailing cells.

And unless the battery in question has packed up completely a simple test will produce a fickle answer if the load it applies is different to the vehicle’s own starter motor. Any way you look at it, traditional tests are not foolproof.

Technology aims to move battery testing from a black art to clean-cut science, with comprehensive analysis the first step. Argus’s flagship AA500P analyser matches tests to the type of battery – see Capacity or cranking? (below) – to give a quick, complete picture of cell condition.

The AA500P measures capacity, cranking health, alternator output and more, while compensating for temperature and the battery’s state of charge. Tests can be made with the battery on the bench or in the vehicle with the engine running.

Operation is through a series of screens. You feed in info about the battery and the analyser walks you through the job, as show in Test sequence overleaf.

If the battery’s details are missing or indecipherable the test can still go ahead, though the results won’t be as comprehensive. Should the analyser find a shorted cell, the battery is scrap and you’re told right away.

A competent charger is the second weapon. If analysis shows a battery is low on capacity or cranking health but otherwise in good order, its poor performance may be down to sulphation.

That’s the formation of sulphate crystals on the cell plates, brought on by undercharging, low cell electrolyte or inactivity.

Conventional chargers can’t reverse sulphation, and most won’t even know that a battery is connected if it produces less than 8V at the terminals.

Traction’s £280 MPL is smarter: it recognises batteries which have discharged as low as 1V, checks for sulphation, then if necessary swings its sulphation recovery programme into action.

Otherwise it uses different strategies (one if the battery is deeply discharged, another if it’s healthy but part-charged) to bring the battery back to readiness.

If the battery doesn’t shape up within 18hrs, the charger flashes a warning. If all is well the MPL switches to standby (float) mode, meting out just enough power to keep the battery at 100% readiness. In standby, a battery can be left connect indefinitely. Operating mode is shown by multiple LEDs.

For reliable results you must match the test to the battery’s job.

Deep-cycle (aka storage or leisure) designs are built to deliver modest current for a long time, for example into an electric fence transformer. So it makes sense to assess their capacity; it how much electricity they can store.

Cranking batteries have to supply high current in short bursts, so a better test for these is to ask the battery to turn over the engine it’s paired with.

Battery internal resistance is a good measure of capacity, and most analysers measure resistance. Predicting cranking performance from that alone is risky, so Argus analysers go on to follow voltage as the starter operates.

The extent of voltage dip and the speed of its recovery shows battery health.

The simple rule is:

To see if the Argus/Traction team could waken the dean, we checked several apparently scrap batteries. All had served their time in a vehicle then retired to stock fence duty, so were well past their best.

Any with bowed sides were ignored, as case distortion shows that plates have sulphated beyond recovery.

The Argus unit quickly indicated that most were indeed basket cases by finding an internal short circuit. But two it was happier about, reporting no major fault but very low capacity (which suggests sulphation) and recommending a recharge before a fuller analysis could be made.

To discover whether the MPL charger could improve on a conventional unit, we first charged the two potentially-salvageable units overnight with a normal trickle unit, as most farms would. Afterwards, the Argus analyser showed:

So a true capacity improvement and a return to fence duty in both cases.

How about cranking batteries?

Enter a Ford 5600, used on and off through the spring on loader work then moved to round bale feeding in winter. As the ambient temperature dropped so did the Ford’s cranking speed, suggesting sulphation had reduced battery capacity.

A performance check on a cold engine confirmed that just 33% of the battery’s potential was on offer. One de-sulphation charge from the MPL lifted this to 55% and cranking went back to normal.

Will the MPL always recover lost capacity? It depends on how long sulphation has been going on. If the battery casing is bowed, forget it.

Otherwise there’s a good chance that the patient will make a reasonable recovery, though more than one de-sulphation/charge cycle may be necessary.

Unlike simple testers, Argus’s AAP500P anaylser matches the test it does to the type of battery under scrutiny – deep cycle (eg storage or leisure) which delivers modest current over a long period or cranking which supples high current in short bursts.

Operation is through a series of screens. You feed in information about the battery ad the analyser walks you through the job.

Will £500 invested in these two bits of wizardry lift the fog from battery evaluation? Most of the time it will, though in some cases the odd wisp of mist will be left. Either way it’s necessary to read the manuals, understand how the kit works and interpret what it’s telling you See Waking the Dead.