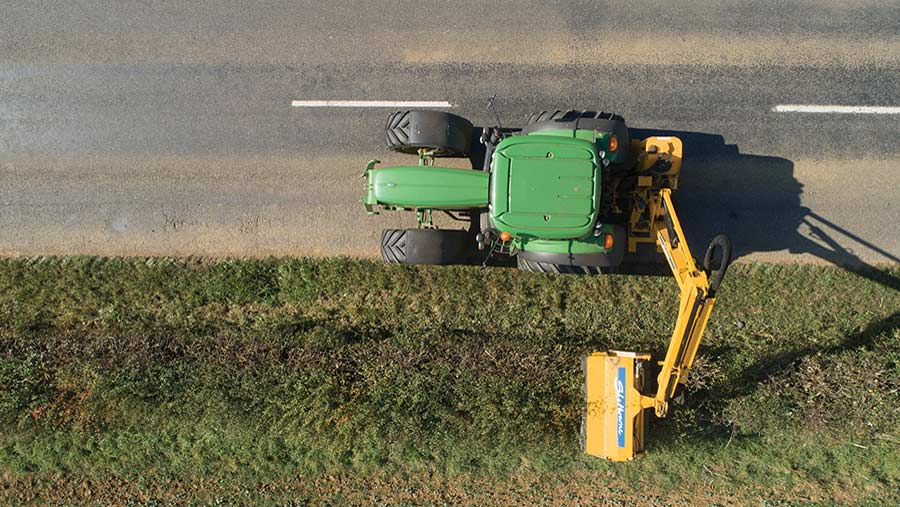 Farmers have found themselves under pressure to fit hedgecutting into a relatively short window around other time-pressured arable tasks, so having an implement that is fit for the job is more important than ever.

Those that haven’t ventured into the hedgecutter market recently might be surprised at the technology now on offer, with features such as sensor-guided levelling, variable forward reach and electronic joystick designed to make bush-whacking work a little less arduous.

As we’re now in the trimming off-season (1 March to 1 September), we’ve had a closer look at the 6m-reach market – the kind of machines farmers and small contractors with a healthy yearly trimming workload will be looking at.

Where possible, we have provided a realistic on-farm price that includes electric proportional joystick controls. 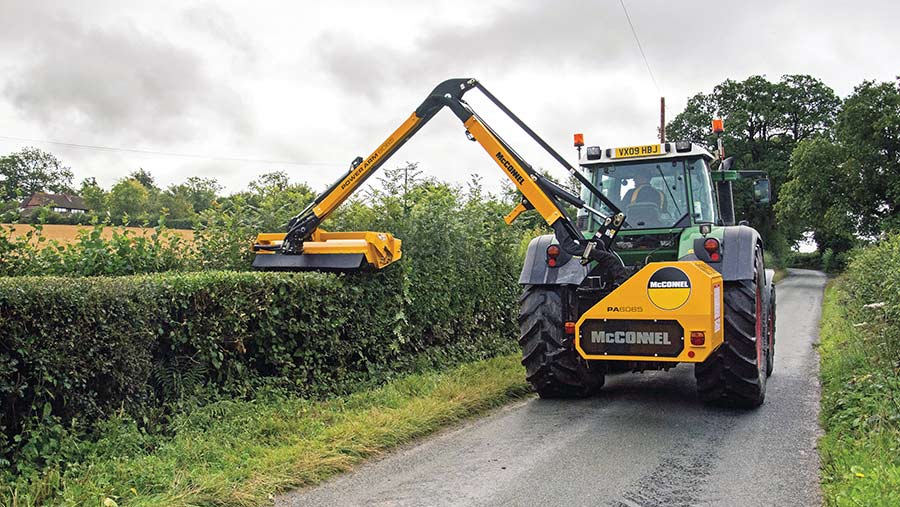 McConnel’s 42 models across 12 ranges is one of the most comprehensive on the market, with the Ludlow-based maker’s line-up extending from 3.2m to 8m. It also produces front-mounted trimmers that can automatically negotiate Armco barriers.

The 65 series was launched back in 2013 and is the smallest McConnel machine to reach beyond 6m.

Tweaks since its inception include a 5hp increase and more control options. The firm was keen to point out that the telescopic 6565T is the better-selling model in this bracket.

Luxuries such as soft-start rotors, hydraulic breakaways and a cushioned top link, along with McConnel’s in-house-built Motion short-stick proportional controls, are all standard.

The fancier full joystick Evolution and Revolution controls offer add-ons including the easy drive system (EDS) cruise control for those spending a lot of time on verge work.

This uses sensors to monitor ground contours and adjusts 30 times/sec at speeds of up to 18kph. 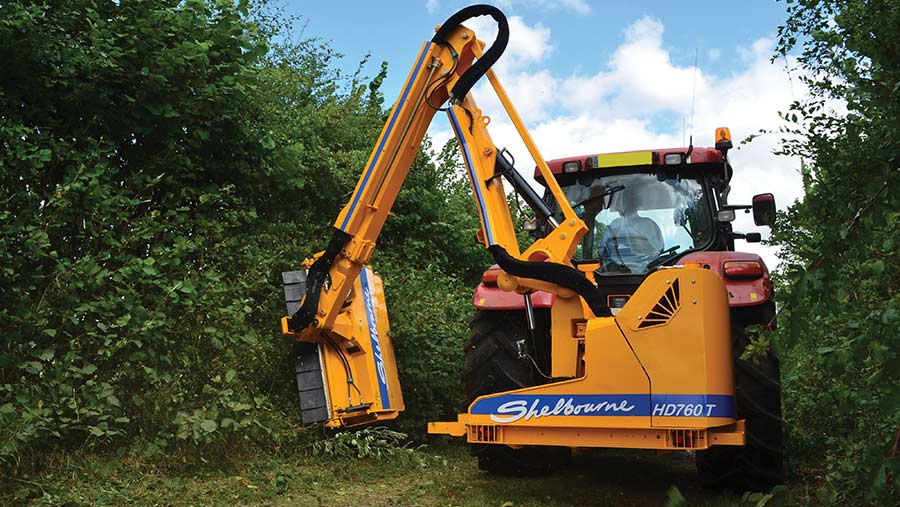 Shelbourne Reynolds has three models that reach to 6m.

All three come with a telescopic arm as standard and are built at the firm’s factory in Stanton, Bury St Edmunds.

The HD760T is the mid-size option, with the arm starting at 4.8m when folded and extending to 6m when pushed out.

The upshot here is the design can be kept fairly compact for narrow lanes.

Shelbourne has given the HD760T a fairly high spec compared to some of its competitors, with fully proportional digital joystick controls, fan-driven oil cooler and a twin V-belt driven head all part of the standard package.

The smaller HD660T model gets the two-way electronic joystick. 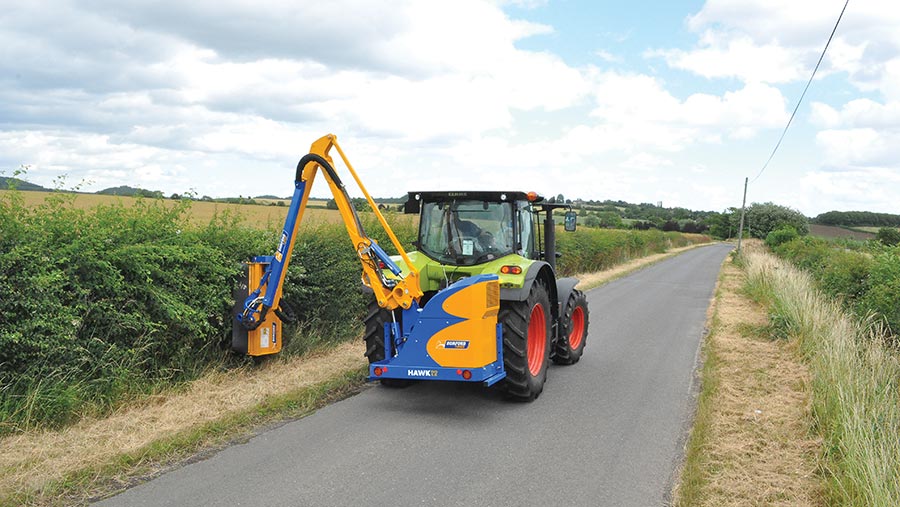 Hedgecutters take up a large chunk of the Bomford portfolio, with more than 20 different models ranging from compact tractor-sized machines up to contractor spec and front-mounted units.

The Worcestershire maker’s 6m Hawk Evo model is sandwiched by 5.4m and 6.5m options. It comes with a 1.2m head and cable controls are standard. A cab guard kit and lights are included in the base spec.

Those after an electronic option could go for the intelligent control system (ICS), which is a stubby proportional joystick with a seat-mounted screen displaying warning messages and hours worked, alongside a selection of hot-key buttons. 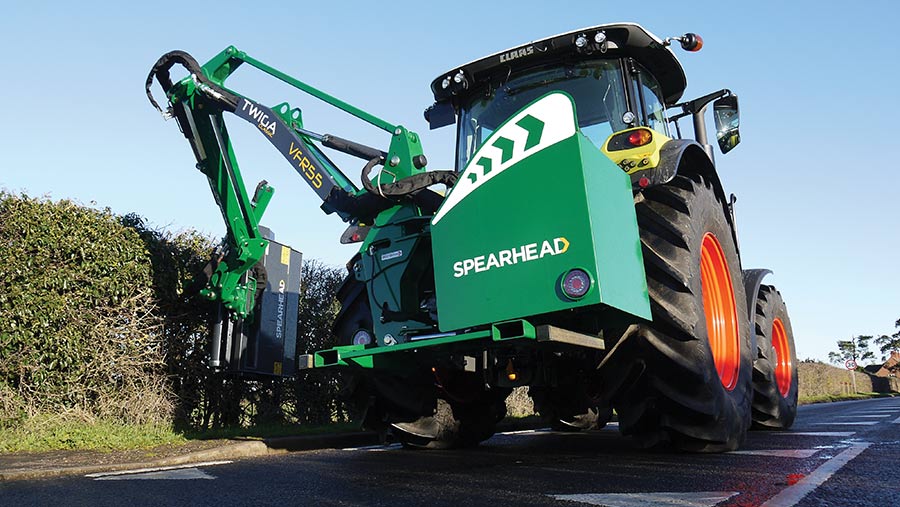 Alongside its mulchers and mowers, Spearhead offers five ranges of hedgetrimmer to suit tractors from 25hp to 140hp.

These are built at the company’s factory in Evesham, Worcestershire. Based on the well-known Excel 565 machines, the five Twiga Classic models span 5m to 6.5m, with the biggest getting a telescopic arm.

The two mid-sized machines – 5.5m and 6m – are available with variable forward reach (VFR). The standard Twiga S60 stretches out to 5.9m and comes with electric proportional joystick controls as standard. 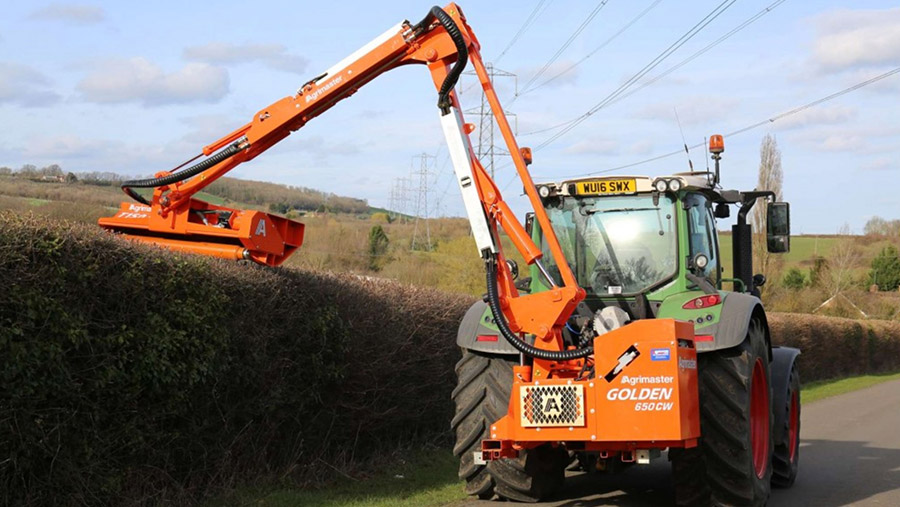 Weaving is better known for its drills and cultivators but the firm has also imported a range of Italian-built grassland machines from Agrimaster for the past 20 years, including arm cutters and flail mowers.

The Worcestershire-based company says it has had design involvement to get the cutters up to UK spec for hedge work as well – the Italian farmers are apparently more interested in using them to cut verges.

There are four machines suitable for agriculture, starting at 5.2m reach and going up to a 6.5m telescopic model.

All are relatively simply to use, but a generous standard spec limits the list of optional extras – hydraulic head float, oil cooler and joystick proportional control all included on base versions. 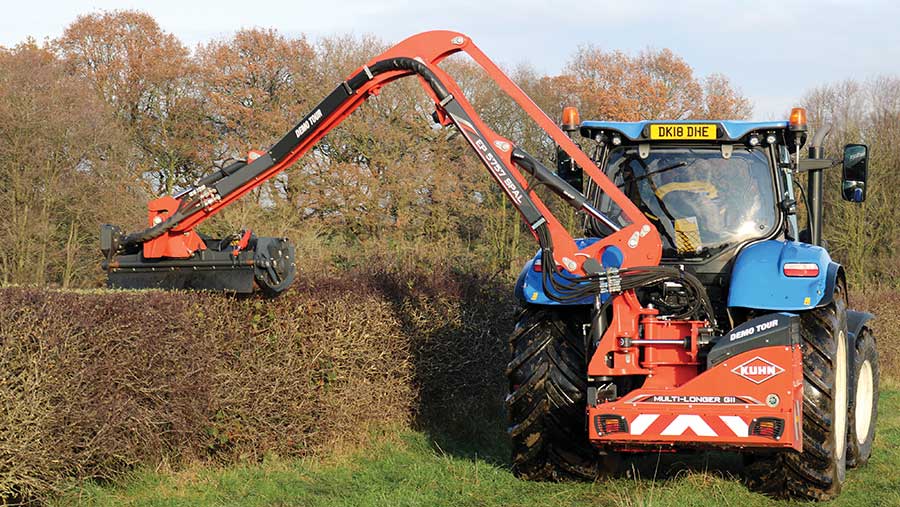 Kuhn’s range of UK-spec hedgecutters is quite small, mainly because it predominantly builds right-sided models for the European market.

The only other country where lefties are sold is Japan, which is why the biggest model extends to a modest 5.7m – slightly below our target spec. These are built in Nantes, where Kuhn also produces straw bedders and mixer wagons.

A quirk with the firm’s Multilonger is that the Optiview arm is semi-leading, which means the head sits slightly further down the side of the tractor to offer a better view from the cab.

A parallelogram arm design allows both parts of the arm to be operated by one control and there’s added suspension for verge work, too.

The Multilonger comes quite highly specced, with four-way proportional joystick control and 116deg of arm slew movement as standard. 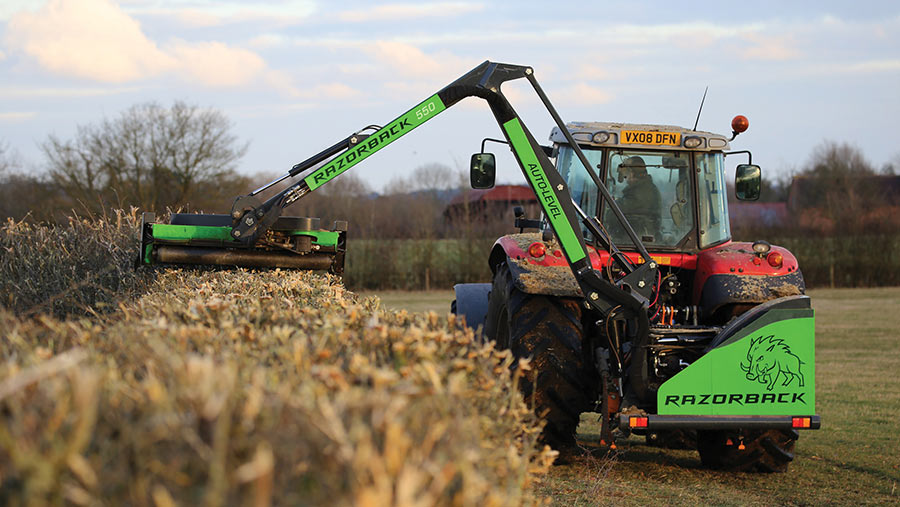 It has been a few years since Mzuri’s sister company Razorback entered the hedgecutting arena with its novel 5.5m reach machine and it has been joined more recently by a larger 6.8m telescopic model.

A key design feature of both machines is a self-levelling pivot between the three-point linkage and the body of the cutter. This allows the tractor to move independently of the trimmer, so if it drops into a rut, the movement isn’t transferred to the cutting head.

Another quirk of the Auto-level machines is the 1.5m fixed blade rotary head – similar to that of a lawnmower – that offers an alternative to the spinning flails used by most machines.

Using three spinning discs means the blades are in contact with the material throughout their 360deg revolution. This design also helps to conserve power and make the head lighter, says Mzuri, though there is still a flail option for those who need it.