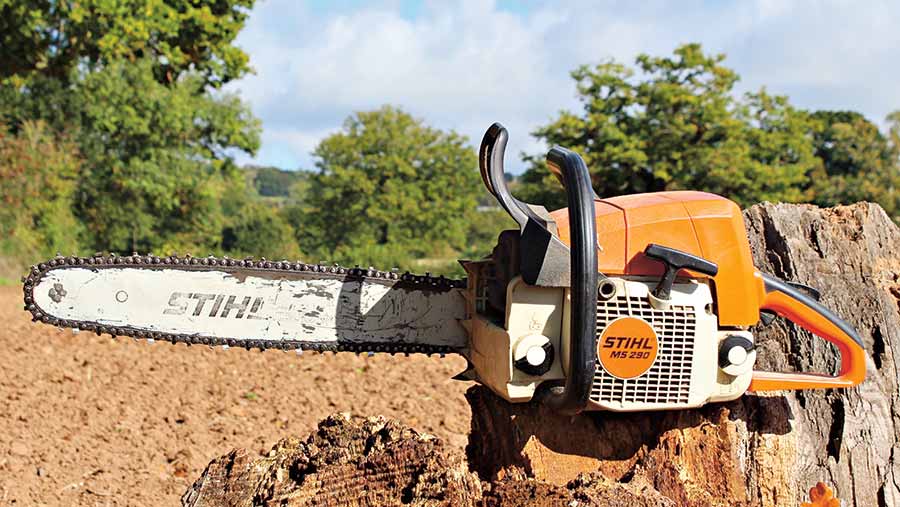 Two-stroke engines like regular use, so after a summer of languishing at the back of the workshop it should be no surprise if the old chainsaw is reluctant to start.

Yanking at the starting cord until you’re blue in the face rarely yields satisfactory results either, so if there are no reassuring coughs after half a dozen pulls it’s time to take a break and perform a few simple checks.

The basic principle of happy two-stroke combustion is that you need fuel, air, compression and a spark, all occurring in the right place and at the right time. So if any of those things are out of kilter the engine is unlikely to go.

Happily, there’s usually a simple fix, particularly if the saw was running well before it was laid up.

To help pinpoint any problems we enlisted the help of Stihl UK’s resident chainsaw and two-stroke engine expert, Mark Hellewell.

For the purposes of this article, we’re focusing on a well-used and abused 2011 Stihl 261 and a slightly older 290 model, both of which are popular farm-spec machines.

However, the same basic principles apply to most chainsaws, and any two-stroke powered implement for that matter.

If you’re still in the dark at the end of the piece, it might be worth throwing in the towel and enlisting the help of an expert. 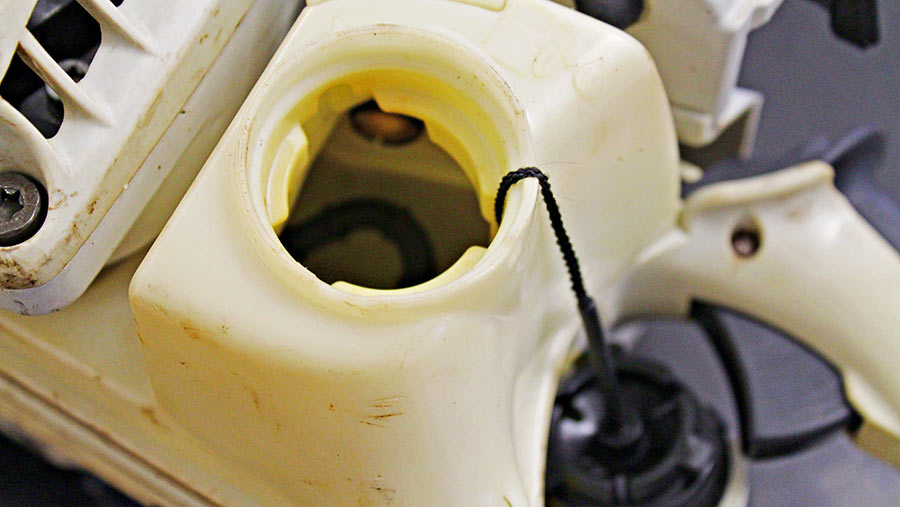 Stale fuel is one of the most common causes of poor starting in a two-stroke engine. Petrol starts to oxidise and go off after about six weeks and as it does so it takes on an acrid varnish-like smell.

If yours has a whiff of Ronseal about it, empty the tank and refill with fresh fuel. If this doesn’t do the trick after a few pulls, try draining the carb or, if a priming bulb is fitted, use that to draw fresh fuel through.

To prevent the problem occurring again it’s best to run the engine completely dry before any prolonged period of storage so that there’s nothing left in the tank or carburettor. (See ‘Fuel mixing’)

If you still suspect there’s a problem with the fuel supply, remove the spark plug and examine it. If it’s bone dry it’s likely no fuel is getting into the cylinder, which could signal a carburettor problem.

If it’s damp it’s more likely to be spark or compression trouble, while a soaking wet plug could point to a stuck butterfly in the choke, which is causing the engine to flood. 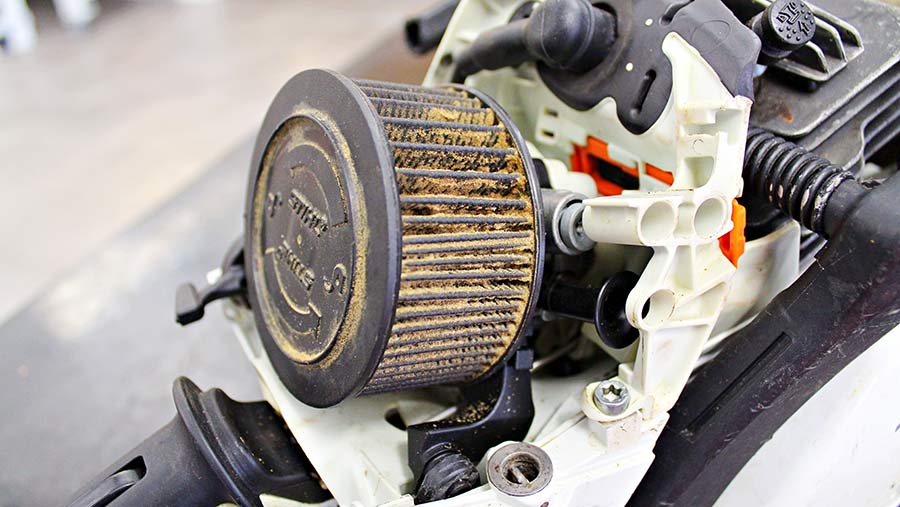 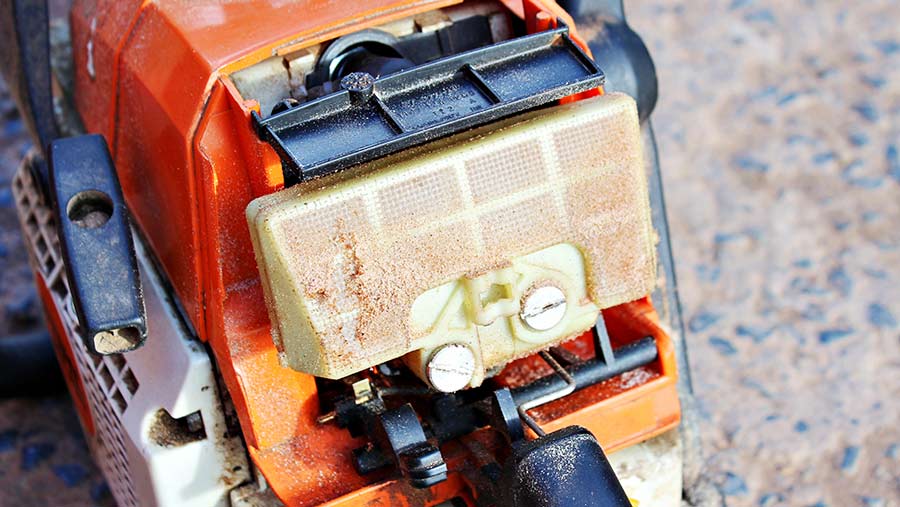 If everything seems OK in the fuel department, air could be the culprit. Start by checking the cleanliness of the air cleaner, and if it’s clarted up with crud, remove it and have another go at starting the engine.

Only do this if you’re in a dust-free environment. If the saw then goes, you can probably fix your starting problem by cleaning or replacing the filter. 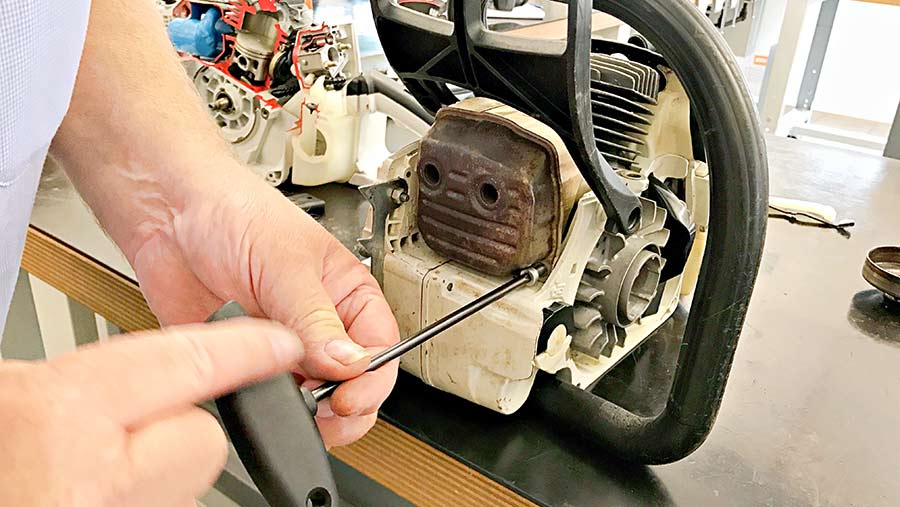 The exhaust is just as important for gas flow as the intake and if this is clogged with carbon you’ll never get it to go.

If you think this is the problem you can remove the exhaust via a couple of torx screws and have a proper inspection.

The gung-ho technique for clearing it out is to set it on fire, but a more sensible approach is scrape it out with a length of wire. If it refuses to unclog, replacing it could be the only option. They cost about £40. 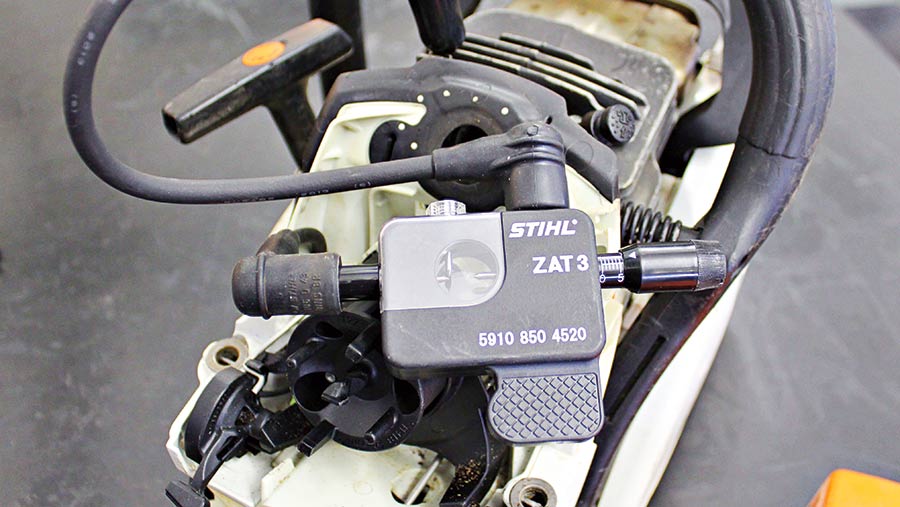 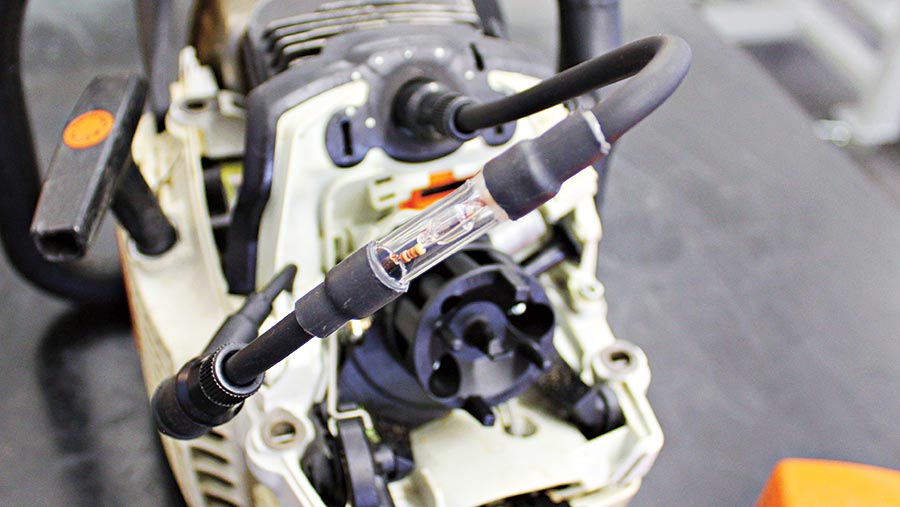 Ignition is the next port of call and you should start by testing if there’s a strong enough spark.

The age-old technique of wedging the plug body against the engine’s cooling fins will give you a rough idea if there’s a decent spark.

But unless you want some singed eyebrows you’ll need to keep the plug body well away from the open spark plug hole and carb.

The fact that the ignition system develops about 20,000V means it could also give you a nasty shock.

A plug tester is a safer alternative and has the added benefit of telling whether the spark is strong enough for the job.

That’s because it takes a lot less energy to create a spark in the open air than it does under compression in the cylinder.

Cheaper versions use a bulb and resistor combination to show if the spark is up to the job, while Stihl’s own model gives an exact measurement of its strength.

As a guide, a saw built after the early 1990s, with electronic ignition, is healthy in this department if it can throw the spark across a 6mm gap.

If there’s weak spark try fitting a new plug. This needs to be the correct one for the saw, though, so don’t try pinching one from the old strimmer lurking in the corner.

The fault could also be with the ignition unit itself or its timing, which we’ll come on to. 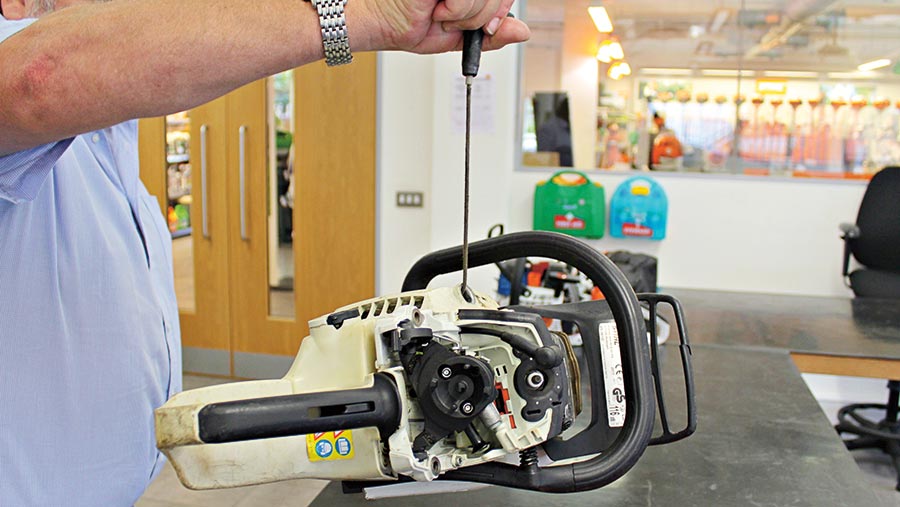 If air, fuel and the spark are all in order and there’s still no sign of life, it’s worth checking the saw has enough compression.

With the spark plug cap removed and the ignition disabled, hold the saw up by the starter cord.

It should hold firm under its own weight, or drop in a series of jerks. So if it glides freely to the deck, something’s awry. If a decompressor button is fitted on the top of the cylinder, check this isn’t stuck or leaking.

If that’s not to blame you could be looking at stuck or leaky piston rings, which will probably need replacing. If there’s a whooshing sound when you turn it over, the head gasket could have gone. 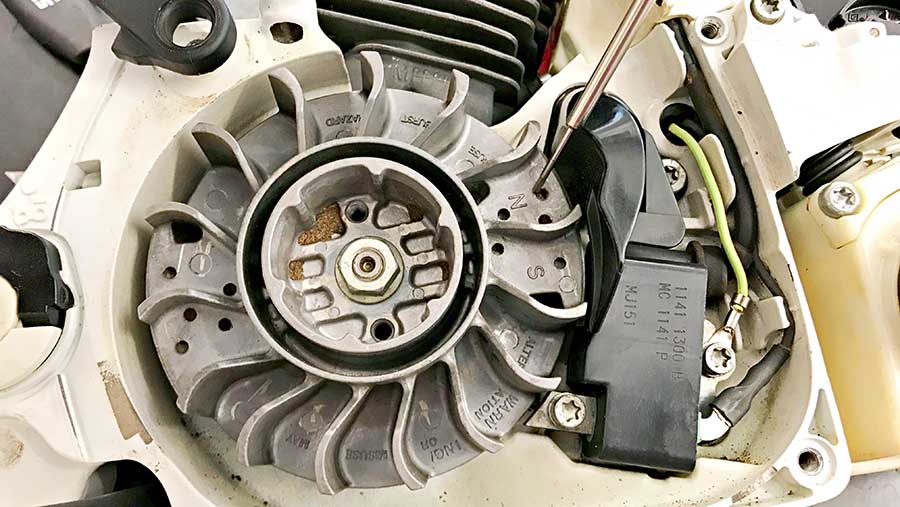 If all of the above fails to shed any light there could be a problem with the engine’s ignition unit or timing.

Sadly we don’t have the space to go through this in any great detail, but there are a few quick checks to see if all’s as it should be.

On most saws the spark is initiated when the magnets on the flywheel whizz past the armature pole within the black ignition unit.

This then generates an electrical pulse, which is sent to the spark at the correct time, depending on the engine’s speed.

To quickly check if this is working as it should, remove the plug and insert a clean, soft object (such as a length of rubber hose) into the cylinder.

Then turn the saw over slowly until you can feel the piston is at the top of its stroke. If you look at the flywheel now, the magnets should be just past the ignition unit, showing that the spark has been generated and had enough time to be sent to the plug.

Another tell-tale sign that the timing it out is if the saw kicks back aggressively when you try to start it.

A common cause of knocking timing out on a chainsaw is if someone uses an impact wrench to remove the clutch unit. This is a big no-no as it often damages or shears the timing key.

To fix the problem you’ll need to buy or make a puller to remove the flywheel. In most cases you’ll need to replace the whole flywheel as the key is incorporated into the casting.

The black ignition units themselves can also fail, particularly if the case is damaged and water or dust gets in. Non-genuine replacements can be as cheap as £30, but the genuine part is nearer £100. 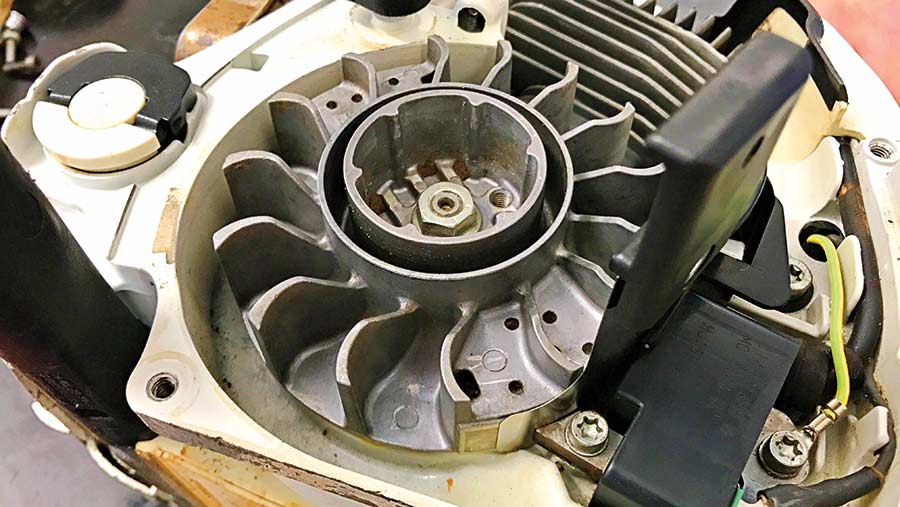 Problems can also arise if the air gap between the flywheel magnet and the ignition unit’s armature pole is incorrect. For it to work properly this should measure 0.2-0.3mm.

You can check this easily with a feeler gauge, or with a specific tool supplied by your saw’s manufacturer. The spacing can be adjusted using the torx screw on the ignition unit’s armature pole.

While you’re here you can also check the stop switch is working as it should. Remove the live wire from the ignition unit and try starting the saw. If it fires up, you’ve got a problem with the stop circuit. 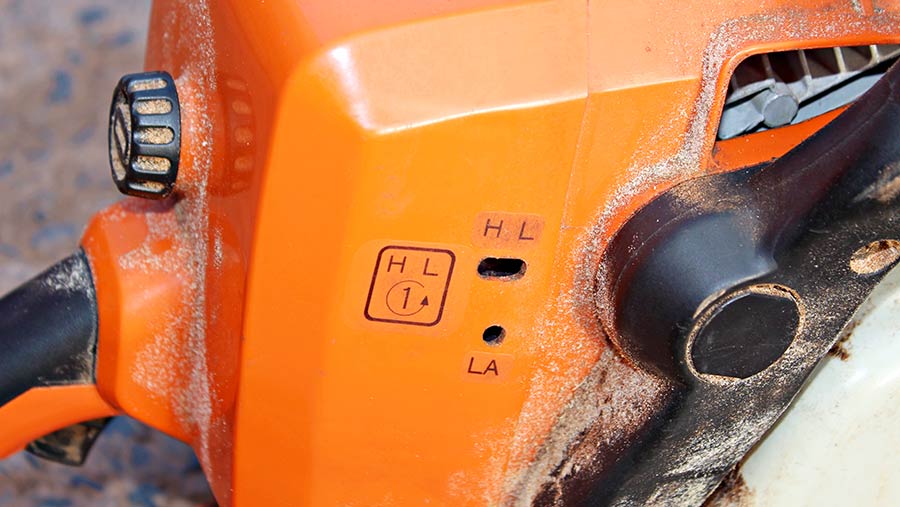 Older saws have screws to manually set the rev range, newer ones are digital © James Andrews

If you get the saw to go but it’s running a little on the rough side, there are a few things you can do.

On our example saws there are a series of screws that allow you to adjust the high, low and idle rev points.

The high idle is best left to the experts, but you can adjust the low rev adjuster to speed up the saw’s pick-up and the idle to get it ticking over smoothly without engaging the centrifugal clutch.

If it still runs in a lumpy fashion the carb could be at fault, meaning a thorough clean or rebuild could be in order.

More modern computer-controlled saws will probably need to go back to the dealer for such tweaks.

To keep your engine running as it should, you need to mix the right quantity of good-quality two-stroke oil into your petrol.

There are plenty of horror stories about people adding chain oil, vegetable oil or no oil, all of which will result in premature wear, overheating or seizing up.

If you use a good-quality branded two-stroke oil designed for air-cooled engines  – the stuff sold in petrol stations for water-cooled engines is no good – you can run at a petrol-to-oil ratio of 50 to 1.

Fully synthetic oils have the longest shelf life and will prolong the life of the engine. These are generally the best choice for heavy users. Semi-synthetic oils are the next best followed by the bog-standard two-stroke mineral oil.

Top quality premixed fuels are also available, which are blended to have a long shelf life. Stihl’s version is called Motomix and costs about £4.50/litre.