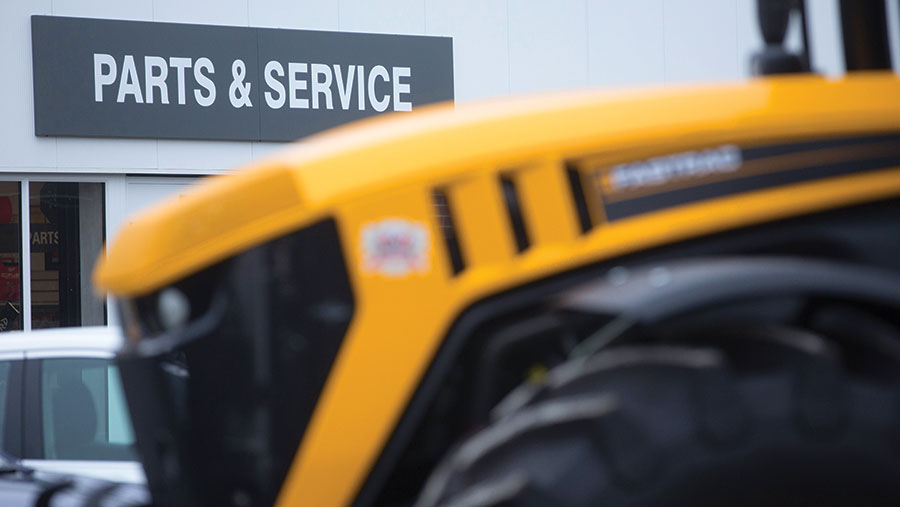 Mass factory closures and the lockdown of more than one-quarter of the world’s population may have sent world economies into a whirlwind, but farm machinery manufacturers are doing everything they can to keep equipment working and farmers supplied.

We have been in touch with makers and dealers across the country to find out how they are managing the crisis, and all are demonstrating typical farming stoicism to keep businesses running during this challenging time.

John Deere is one of the few manufacturers to still be producing machines in Europe, with its Mannheim factory in south-west Germany operational at the time of writing.

Its parts business is also functioning as normal, with all European parts depots apparently delivering to order. However, with delivery firms at full stretch, it’s likely there will be some delays.

Dealerships have been adapting to the challenges and are continuing to deliver new machinery and parts, and carry out servicing.

Many are introducing contactless parts delivery and are keeping their customers up to date with regular bulletins by email and on social media. Some also have online stores, which are still accepting orders.

For those with newer machinery, dealers are also able to log in remotely via the JD Link telematics system, which allows some technical problems to be diagnosed without needing a field visit.

East Anglian dealer Tuckwell was one of the first dealers to shut its depots (24 March) to anyone but staff members. However, it maintains the dealership is still open on the phone for spare parts orders.

These can be collected from designated collection points outside the building or delivered to farm.

It has stopped all machinery demonstrations, but repair work is continuing and should be booked over the phone.

The big news coming out of Claas is that its combine production facility in Harsewinkel, Germany, has slowed production and will close until 17 April.

Added to that, eight of the 10 factories supplying Claas parts are entering a controlled period of shutdown, including its French tractor plant.

Claas HQ says it will provide “as many machines as possible” to the market and there is a range of new and used kit available through its dealer network.

Despite the slowdown at Harsewinkel, some divisions of the company continue to operate, including the machine and spare parts shipment in Germany and at Saxham in Suffolk.

Claas UK CEO Trevor Tyrrell says the Harsewinkel factory has committed to deliver “every retail order that has been confirmed” and, if an order is delayed, Claas and its dealers will support customers with either a demonstration unit or a young used machine.

The only orders at risk of being cancelled involve Claas UK’s future stock.

There is a limited number of combines and foragers  available to buy, as well as those currently earmarked for dealer demonstrations, and the company expects them to sell out quickly.

There is more than enough stock in the system to fulfil orders for the next three months and farmers are being told not to worry about existing orders.

This view is echoed by north-west Claas dealer Rickerbys. No customer orders have been put on hold so far and it says there is a good stock of spare parts for the spring workload, with only slight delays on ordered parts.

Pre-arranged non-contact drop-off points have been used to deliver parts to customers and the firm is confident that previous country-wide crises such as BSE and foot-and-mouth have prepared the industry to cope with the challenges ahead.

Claas has also brought forward the launch of its electronic parts catalogue, which will allow machinery owners to more easily identify the parts they require by simply entering the machine model and its serial number.

The system can be accessed on the Claas website.

Orders can then be placed via the local dealer and requests will be delivered overnight from Claas UK’s parts warehouse at Saxham.

Stock from the firm’s Parts Logistics Centre in Hamm, Germany, should also be delivered by the next day. 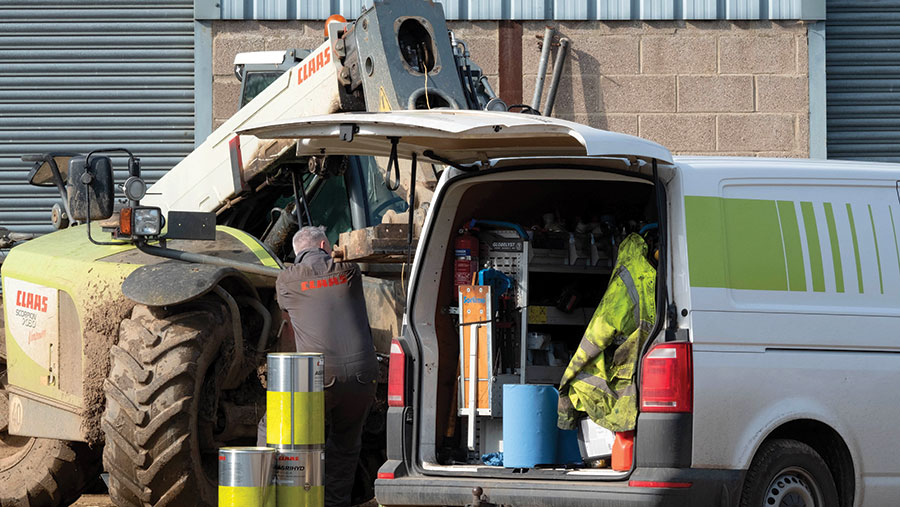 Agco has suspended production at a number of its European sites due to the tightening supply chain and materials shortages.

These include Fendt’s German tractor plant at Marktoberdorf and cab factory in Asbach-Baumenheim, along with Massey Ferguson’s Beauvais facility in France.

Fendt says despite a good number of tractor orders, production stopped on 25 March, as Italian parts suppliers weren’t able to keep up with demand. Spare parts supply at four other Fendt sites is continuing for the time being.

The company is still shipping machines that have rolled off the production line, but there are a “good number” of orders still in the build stage during one of the busiest months.

However, dealers have three to four months’ stock of retail machines, so any gaps should be filled in the short term.

Fendt says customers still looking to buy machinery before harvest may have to compromise on model and spec.

South-west dealer Compass Tractors says some new machinery orders might not make it on farm as planned, and it is keeping a number of machines, including large tractors and foragers, in the yard to provide backup.

It is business as usual at the moment, and the firm hasn’t been notified of any delays in the delivery of new kit.

It also has a good stock of common spare parts, but says other components sourced from the continent are no longer enjoying next-day delivery. In most cases, these parts arrive two to three days later due to more stringent measures at the ports.

Massey Ferguson’s parts availability in the UK is said to be solid and the manufacturer has been in contact with several customers to put contingency plans in place to keep their farms running.

There is a potential short-term effect on UK orders due to Beauvais’ closure, and MF’s forecourt stock will be spread across the country to help fill this void.

There are currently 350 tractors on standby to help out farmers across a host of European countries, including the UK.

Agco dealer Lister Wilder says it always keeps an extensive stock of spare parts and any recent orders will get to customers quickly. However, delivery times may slow as requests rise and pressure increases on transport links.

New machinery in the dealer’s yard is plentiful at the moment and should keep up with demand until about July/August. By then, it hopes factories will have kicked back into production.

It is also helping famers fill any workforce gaps imposed as a result of travel bans by posting jobs through its social media channels.

The wider implications of lengthy factory shutdowns could hit the validity of parts, such as engines, that don’t comply with the forthcoming Stage 5 emissions laws.

Though this is more important for manufacturers than farmers, engines that meet current emissions legislation have a sell-by date of the end of this year, which is likely to be missed, given the halt in machinery builds.

A joint statement by the European mobile machinery industry has called for a temporary moratorium to allow makers that have purchased these engines – originally required to be in machines by 30 June and on sale by the end of the year – to have deadlines postponed until the situation can be reassessed.

If this doesn’t happen, many engines will have to scrapped, leading to further costs and environmental issues.

New Holland has paused manufacturing at all of its factories and, at the time of going to print, the Basildon plant was set to be out of action until 3 April.

However, the firm says that date will be under continuous review. Completed machines are still being dispatched from the plant and it says it is working with dealers to make sure these get to customers.

Delays are to be expected, but because the factory is on UK soil, the firm says it is well placed to meet orders.

Buyers are still able to place orders, but these will not be processed until production commences again.

As for parts supply, New Holland says its priority is to keep customers going and its distribution centre in Daventry is dispatching as normal.

However, dealers and customers are no longer allowed to collect parts directly from the site.

Dealers are also functioning and have put extra measures in place to keep their parts, service and sales departments contactable and available.

These include a call-and-collect system which allows parts to be pre-ordered and collected without any human contact. They are also attending customer callouts and have put strict health-and-safety measures in place.

New Holland dealer TH White is running a skeleton workforce at some outlets, and on-farm demonstrations are continuing with the say-so of the customer and depot. New machinery installations will take place on a case-by-case basis.

The firm’s workshop is still operational, but any work carried out on farm has to be done in isolation, with the mechanic using personal protective equipment.

Deliveries are now free for customers who are self-isolating and pick-up boxes are in place outside the depots for collecting parts.

Production at JCB’s nine manufacturing plants in Staffordshire, Derbyshire and Wrexham ceased on 18 March due to a massive drop in global demand and was scheduled to recommence on 3 April.

However, the firm has recently announced it is extending this until at least the end of April.

It says demand for its agricultural machines is still strong and because its dealers always carry a stock of new machines, it is still able to fulfil customer orders. There could also be some stock sharing between dealers to plug any gaps.

The pause in production will cause some delay in the delivery of machines yet to be built, but the firm says these will be a priority once production resumes. Dealers are also continuing to take new orders.

The company will be using its new £50m Cab Systems factory to make steel housings for a brand-new design of ventilator from Dyson. A minimum of 10,000 of the JCB housings are earmarked for manufacture once Dyson receives regulatory approval for its design.

JCB’s World Parts Centre in Uttoxeter, Staffordshire, is open and distributing parts, and its dealers are continuing to operate, albeit with some adjustments to their working practices.

Lincolnshire and Yorkshire dealer Peacock and Binnington has asked all of its customers to phone to request parts and they have a closed-door collection policy.

This means phoning upon arrival at the dealership, at which point parts will be brought out and left for the customer to pick up, without breaching the 2m social distancing policy.

Servicing and repairs are continuing, but mechanics have to work in isolated conditions. They are keeping workshop repairs to a minimum and most work will be carried out on farm, with prior arrangement.

They will also use hand wash facilities/wipes before and after repair.