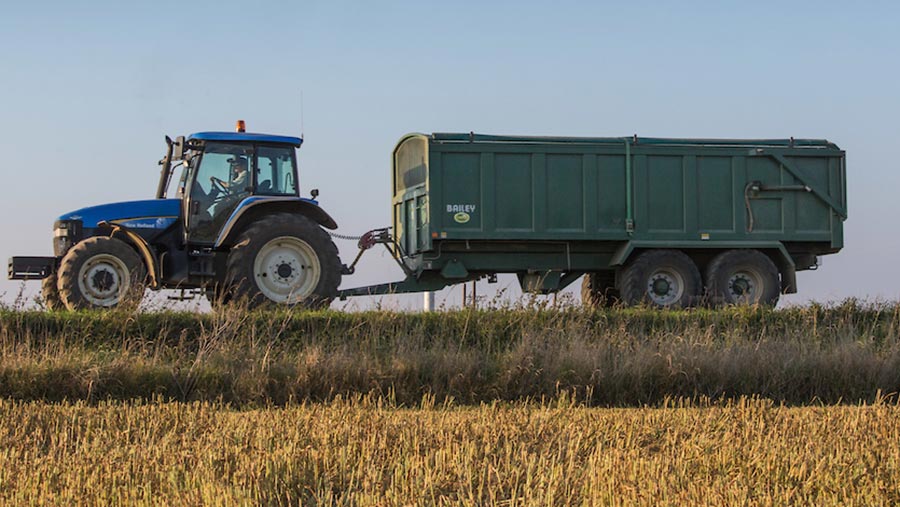 About three-quarters of trailers with hydraulic brakes fail dealer tests while a quarter of these offer no stopping power whatsoever.

Often put on a pedestal as the answer to all our braking issues, air-activated anchors have an equally poor track record – most of which is down to a lack of maintenance and adjustment.

A few simple things can be done to assess the problem and tweak trailer brakes to get them up to speed.

We got some advice from Dave White, service manager at Lincolnshire trailer sales and hire specialist Ireland’s Farm Machinery.

He looks at how to test your brakes, upgrading, parts and costs.

In Mr White’s experience many brakes fail to comply with safety standards.

He says: “When we started out with Bagma’s brake-testing kit we found that nearly all trailers running on standard ag-spec eight-stud axles were failing to achieve the minimum 25% braking efficiency.

“And with air brakes it’s often worse as they need to reach 45% efficiency. Like many farm trailers, our hire fleet is stood still for much of the year and so drums can soon rust up through lack of use.

“We need to know for sure that the trailers are up to scratch before they go out and so we’ve got a fairly straightforward procedure we go through to get them ready for the road.”

Before anything goes through the Bagma tests at Ireland’s, the brakes are checked for adjustment and slack-adjusters are wound up or splined levers wound round and repositioned on their shafts. 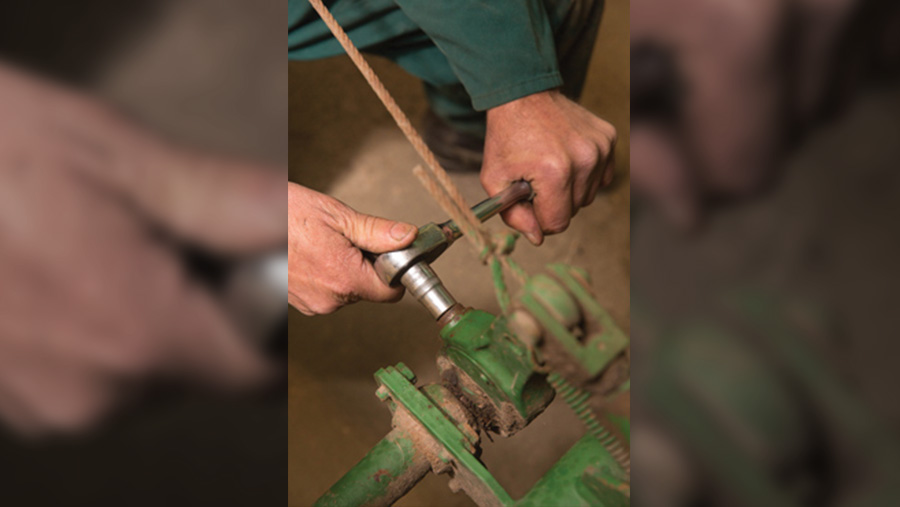 Before testing, ratchet the slack-adjusters up tight and then back them off a quarter-turn – or a bit more if the brakes are still binding.

Bagma and Turnkey have jointly developed a brake tester that requires no special kit to operate other than the simple BrakeSafe box, plonked on the floor of the tractor cab.

Effectively a deccelerometer, it measures the forces that come into play when the anchors are applied.

By plumbing the trailer brake line into a spool valve it’s possible to measure the braking efficiency of that trailer, independent of the tractor.

The oil jetting out of a spool valve is typically at much higher pressure than what comes down the brake lines so a restrictor valve and pressure gauge are used to provide a more realistic braking force. 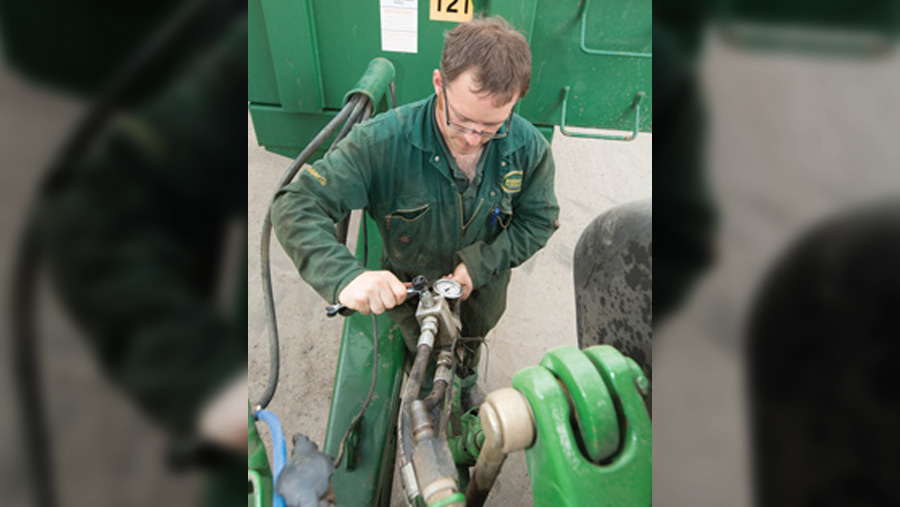 Having plumbed the trailer brake line into a spool-valve it’s then possible to measure the braking efficiency of that trailer.

With the brakes plumbed up and the tester box in the cab, it’s then simply a case of setting off at a steady pace (target speed of about 30kph), using the hand throttle to keep engine revs at a steady 1,800rpm, therefore maintaining an even oil pressure.

Once up to speed, the driver then dips the clutch and pulls the spool lever, bringing the whole rig to an eventual halt. It’s noticeably slower than normal without the aid of the tractor’s brakes.

Down in the footwell, in a series of whirrs and bleeps, the BrakeSafe box does its maths and then comes up with a figure for braking efficiency and spews out a supermarket receipt-sized printout to prove it.

To get a true figure for that trailer’s stopping power some more maths is needed to take the weight of the load into account. That way if the trailer’s not loaded up to the max it’s still possible to generate an accurate picture of just how well it would stop if it was.

Finally a percentage figure for braking efficiency is generated – trailers with oil-activated anchors must come in above 25%, while air-braked rigs must achieve 45%.

Farmers Weekly trialled various ways of upgrading hydraulic trailer brakes and looked at the effect they had on braking efficiency.

By going from a 20mm diameter ram to a 30mm one, stopping power increased by more than 100%. Changing from quarter-inch to half-inch hoses improved the situation by another 30%. 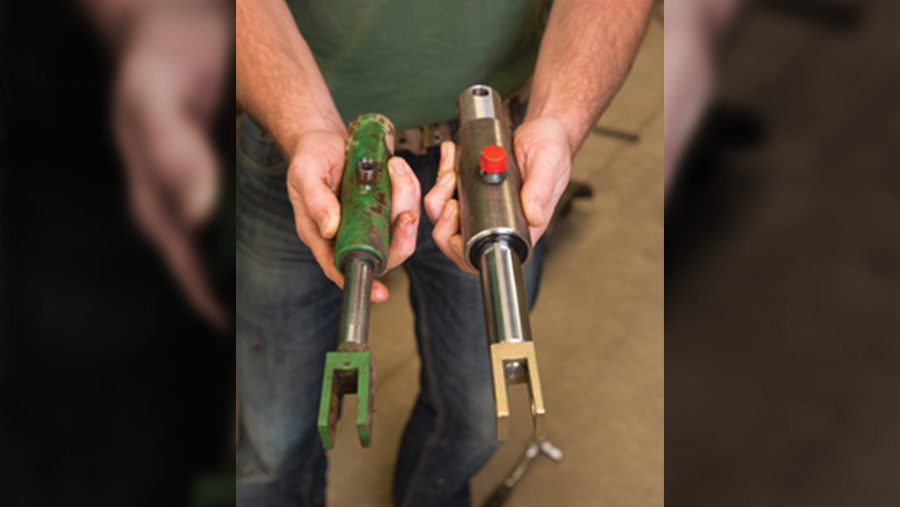 At a cost of about £30 each, 30mm brake rams generate more than double the braking force of standard 20mm units.

Reflecting this, Ireland’s Farm Machinery now regularly upgrades customers’ trailer brakes with bigger rams and changes the hoses running from the five-way manifold to the rams.

For this purpose, three-eighth inch hose has proved to be enough, not only increasing hydraulic power for braking but improving return oil flow when the brakes are released.

5 ways to improve your stopping power

As the Bagma figures suggest, most fail and need more than just some gentle adjustment. Here’s how the team at Ireland’s boost stopping power.

Undo the bolts retaining the hub cab and remove it. Wind off the main hub nut so that you can carefully remove the outer wheel bearing.

With a bit of gentle persuasion and a trolley jack positioned underneath, it should now be possible to slide the drum off to expose  the brake shoes and associated paraphernalia. 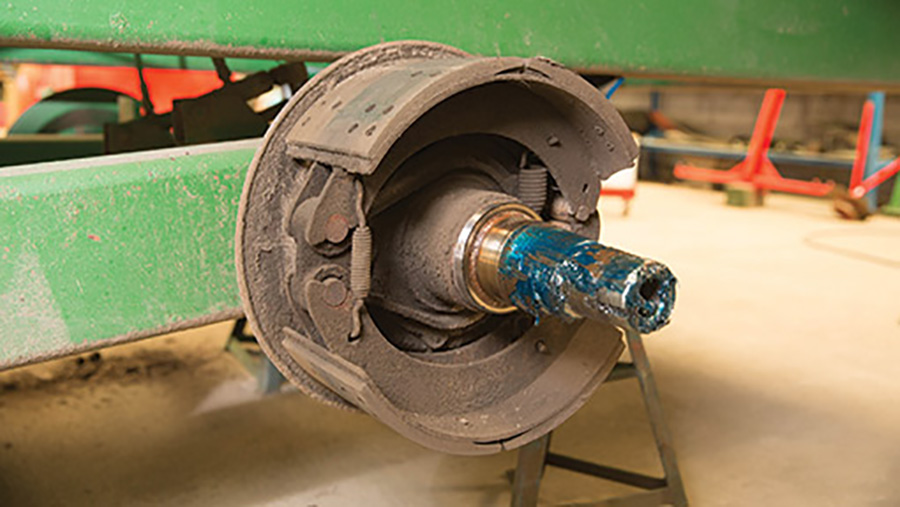 With a pry-bar in place to take up the spring pressure, gently lever out the pins that the actuator shaft cams pivot around, squeezing up their retaining clips to release them.

At the other end of the brake shoes, again lift the spring pressure off and try to tap the hinge pins out. 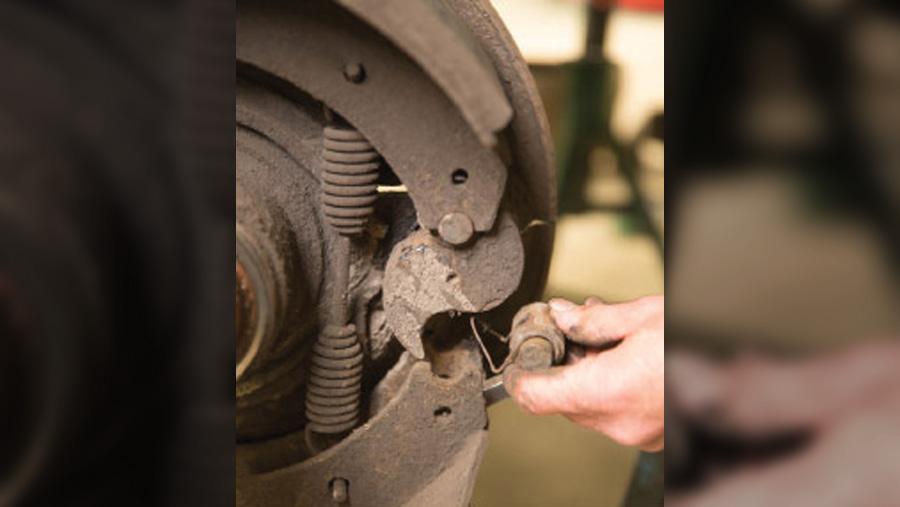 If they won’t budge, lever the shoes off to one side and remove them.

Then use some heat to persuade them to come free. 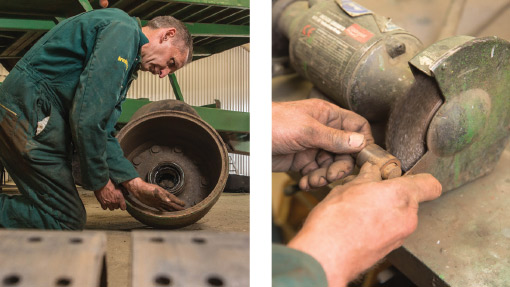 Armed with plenty of elbow grease and emery cloth, work round each drum to get rid of any rust and leave a shiny metallic finish. If there are any ridges then the drums will need to end up in the scrap bin.

With the shoes, rub down the surface to leave clean friction material and remove any glazing.

Give the pins a buzz-up on the wire wheel and clean up any areas where movement occurs around the cams, shafts and pins. 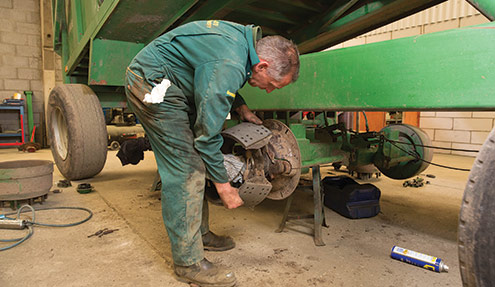 Put everything back together as it came apart, applying plenty of copper grease to the pins and cams.

With the hinge pins back in place and the main spring holding the two shoes together, slide the pivot pins back into their slots on the cam, being careful to ensure their retaining clips seat correctly.

Run the trailer back through the BrakeSafe test. In most cases, the Ireland’s team find that the brakes will usually pass after a good clean-up. However where it’s close to the mark, hydraulic brakes will generally  get an upgrade.

Ireland’s Farm Machinery, near Boston, Lincolnshire, runs a hire fleet of Bailey trailers as AJ Saul Hire, plus John Deere tractors and JCB Loadalls in addition to a range of cultivation, mowing, onion and potato kit.

Having bought into the Bagma BrakeSafe scheme, all the trailers the company sells and hire go through the test before leaving the yard.

As such, the firm’s mechanics are well versed in what’s required to get rigs up to the standards required and make the whole process look pretty slick and straightforward.