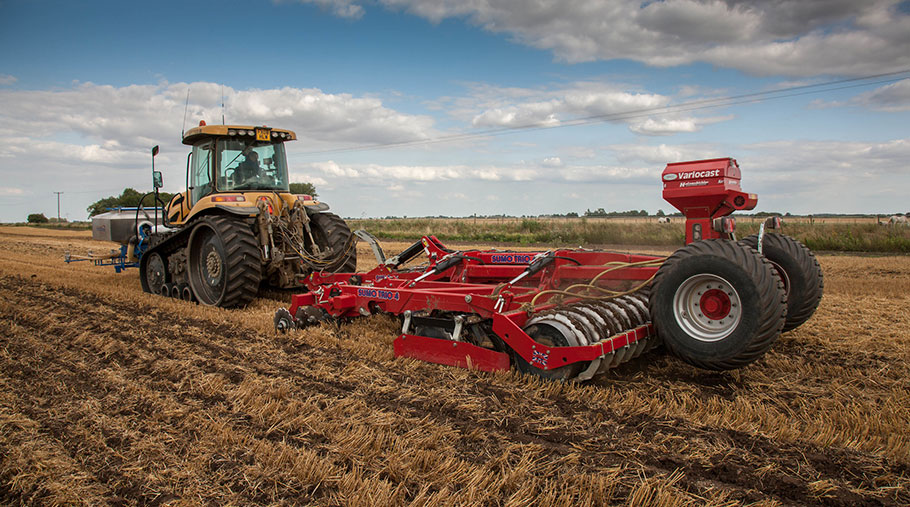 Soil-engaging parts are one of those boringly inevitable expenses when running a cultivator or drill.

But while many shop around for the cheapest lumps of metal to haul through the ground, a company in North Yorkshire has been gathering a loyal group of followers for its harder-wearing premium versions.

JJ Metcalfe and son’s offerings boast lifespans between four and 10 times that of conventional heat-treated steel and promise to maintain their performance right up until the point they’re fit for the scrap bin.

Part of that’s due to the designs company director Mike Metcalfe creates, but it’s also helped significantly by the use of ultra-hard tungsten carbide at the main wear points.

This wonder material is second in hardness only to industrial diamonds – as used on oil rig drill bits – and is apparently particularly effective at standing up to the abuse of an abrasive soil.

However, unlike steel that’s used to form the whole component, this comes in thin tiles that need to be attached in some way. And herein lies the problem – getting these slithers of ultra-hard metal to stick to a component that gets dragged through the soil is a tricky business.

“I tried and failed several times and after being led up the garden path by a so-called expert and wasting a lot of money, I eventually gave up,” says Mr Metcalfe.

But a few years after abandoning hope he came across a specialist brazing system that kept them firmly in place. This creates a strong bond under the whole tile, which can’t be achieved by welding. “We get the odd one coming off, but it’s fairly rare and we offer a guarantee to replace them if they do,” he says.

Over the past decade or so, the application of tungsten carbide has become one of the company’s main specialties and it now applies the tiles to products sold by many household names including Heva, Cross Slot, Philip Watkins, Plowman Brothers, Dale Drills and Simtech.

It also makes tungsten carbide equipped versions of parts for almost all common cultivator models, as well as a number of popular direct tine drills. For those not listed in the parts book, they also offer a retrofit service.

The material’s only nemesis is particularly stony ground, where the hard, but relatively brittle tiles can get chipped. To counteract this they offer a slightly softer (but still very hard version) that is more resistant to sharp impacts.

Tungsten-carbide capped parts are usually considerably more expensive than standard metal. But according to Mr Metcalfe, the extended lifespan and reduction in spannering time, means it still makes economic sense.

There are also some agronomic benefits. On conventional components manufacturers generally increase the lifespan by adding more metal and making the leading edges thicker or longer.

But although this looks like you’re getting a lot for your money, it quickly wears to a blunt, rounded shape that can compress and smear the soil, says Mr Metcalfe. When this occurs at depth it can have serious effects on root growth as well as water and air movement.

This doesn’t happen with tungsten carbide, he says. Due to the hardness of the metal, parts can be made smaller and sharper so that they cut cleanly through the soil profile. This eliminates smearing, removes compaction and helps improve drainage.

The tiles also wear evenly and never round off so the parts maintain their performance throughout their lifespan.

A more recent addition to the firm’s portfolio is a universal point that can be grafted on to any brand of subsoiler or min-till cultivator.

It’s called the NG system and with various interchangeable shin and wing options it can be adapted to suit various different applications.

The main selling points are the fact it’s low draft, creates minimal disturbance at the surface and has interchangeable wing and shin options to suit different operations. It also has replaceable wear sections to increase the life of the component. These are simple to change, with just a roll pin holding them in place.

As you might imagine, its design relies heavily the use of tungsten carbide, which is used on the leading edge, shin sections and wing tips.

This has allowed the point to be kept short, reducing the power needed to pull it and the shin to be left vertical, rather than curved.

The main benefit of this is that stops clods rolling up the leg and ending up at the surface.

The sharp pitch of the point is also designed to give greater shattering in dry conditions and the wings have been carefully angled to give just the right amount of lift.

It comes in four standard options – the first is a low draft version that has narrow sections all the way down the shins and is designed to work between four and 12in.

These then gradually increase in thickness, up to option four, which is designed for deep working up to a maximum of 20in.

However, Mr Metcalfe reckons 18in is the most anyone should really be working at. “When you get deeper than that the weight of the soil above pushing against the lifting force of the wing can cause more compaction in the soil profile.”

All models have the option of wings from 150mm to 300mm and prices for the whole assembly range from about £250 to just over £350. Option two, with a shin that’s wide at the base and narrow at the top, combined with a 200mm wing accounts for 90% of the sales.

The units are generally welded to a machine’s existing upper leg assembly, but JJ Metcalfe can also supply full replacement legs for most machines.

Mr Metcalfe is also working on an even harder-wearing version called the NG Endurance. This will incorporate bands of tungsten carbide on the sides if the shin sections to prevent the rear of the unit wearing thin.

The rise in demand for direct drilling has also prompted Mr Metcalfe to come up with a coulter kit to convert existing min-till machines.

This was originally designed as a direct replacement for Horsch’s Duet coulter, meaning it would bolt directly to a CO or Sprinter drill. However, since its launch in 2015, he has also come up with versions to fit Simba’s Freeflow and Vaderdstad’s Seed Hawk.

These coulters are designed to work directly into stubble or cover crops and offer minimal soil disturbance to reduce blackgrass germination.

To do this, Mr Metcalfe made the coulter just 12mm-wide and added a tungsten carbide-tip to create a clean opening and make it last longer. There’s also a bulge of hard-facing weld on either side of the point to create the correct-sized opening for the seed tube mounted at the rear.

Points can be replaced by removing one roll pin and on one of the original farms to test the system they have been lasting for about 750ha.

Prices for the conversion cost £78 per coulter and there’s the option of adding a liquid fertiliser tube for £8 per unit.

About JJ Metcalfe and sons

JJ Metcalfe started out as an agricultural contracting outfit back in 1947, with Mike Metcalfe’s father John at the helm.

Most of his work centred on sugar beet production, but he was also a keen and successful match ploughman – this is where the family interest in cultivation equipment began.

After a stint as a rally driver and race-engine builder, Mike came back to the family business and began making parts for their sugar beet harvester. This then quickly grew into a sideline business as other contractors asked him to supply them.

But it was when he was asked to produce a lower-cost point for a Tim Howard subsoiler that he got into building parts for cultivators. He then quickly started doing work for other manufacturers including Heva and Simba, before moving on to selling retrofit parts for most brands of machine.

The company now has a seven-strong team, including Mike’s daughter Abi and son Jonny.