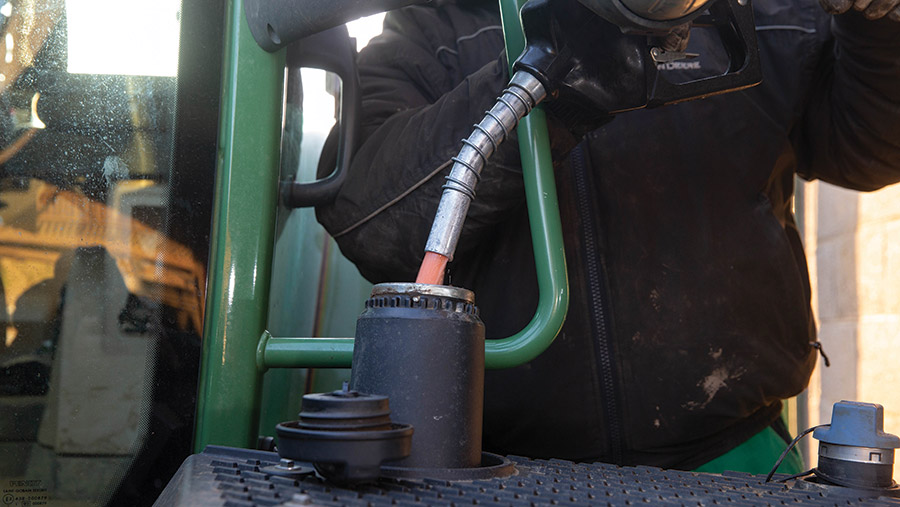 Last autumn, reports of blocked fuel filters came flooding in from parts of the UK, with the finger being pointed at the increasing content of biodiesel being blended into red diesel.

The rise has been driven by a legal requirement to increase the proportion of fuels derived from renewable sources, which fuel quality standards currently cap at 7%.

Biodiesel used to meet this specification is called FAME (fatty acid methyl ester) and it is made from various combinations of fresh and recycled vegetable oils, as well as some animal fats.

FAME is a more tricky substance to keep than regular mineral diesel, and initially it was suggested that the problems were down to the condition of farm storage tanks rather than the quality of the fuel.

But the fact that cases were largely confined to East Anglia and Scotland begged the question that there was something awry with some of this fuel, rather than farmers in those areas having poorer-than-average storage.

In response, the UK Petroleum Industry Association (UKPIA) and its members carried out numerous fuel sample tests, but these failed to pinpoint a single cause and all of the fuels tested were found to meet current standards.

However, tests conducted by one of the UK’s leading fuel additive producers show that there could be a problem with insoluble particles dropping out of some of these fuel blends.

At the height of the troubles, Fuel Additive Science Technology (FAST) – which produces Exocet additives – was inundated with fuel samples and clogged filters from East Anglia and the south-east of England.

It set about testing some 100 samples and found that just 15% contained contaminants resulting from poor storage, such as rust, dust, water and microbes.

And in many cases, these weren’t in high enough concentrations to cause significant blockages.

The remaining samples were found to be free from contaminants, with a clear, bright appearance and they met current fuel specifications.

“Clean gas oil normally has a total contamination value of less than 6mg/kg, but many of these samples were between 15 and 20mg/kg, with some pushing into the low 20s”.

This didn’t mean the samples were beyond legal limits, as the current maximum is 24mg/kg.

But when the sticky residue found on blocked filters was sent for testing at an external laboratory, it revealed that the problem was indeed being caused by these particles.

According to Ms Mansfield, these substances – sterol glucosides and monoglycerides – can drop out of some biodiesel components, and the problem is made worse at low temperatures.

They also don’t melt back in as temperatures rise, so accumulations can build up fairly quickly in cold weather.

“If we’d had a particularly cold spell, it could have been a lot worse,” she says.

The fact that the cases were concentrated in East Anglia and Scotland, suggests the biodiesel components used by producers in these areas differed to those in some other parts of the country.

FAME comes from multiple sources, much of it imported, and it could be that these particular batches more readily released their insoluble constituents.

Fuel producers have apparently worked to address these problems, and according to UKPIA, some have changed “various properties” of their diesel fuel blends.

Since then, the number of reported problems appears to have declined, but the limited amount of fieldwork taking place at this time of year could also have a bearing on this.

For a longer-term fix, an industry taskforce has been created to look into current fuel standards and make sure they guarantee the quality of FAME products being used in the UK.

Regardless of the formations used, FAME is here to stay and it’s sensible to make sure that farm fuel storage able to cope with it.

Goldenrod filters have long been a popular choice in agriculture, largely because they work with gravity-fed tanks, but for more modern, pumped fuel stations, screw-on filters are getting more common.

Cim-Tek’s Hydrosorb and biodiesel filters are good examples and offer filtration levels of 10 microns, as well as having moisture-absorbing elements.

It also offers versions with a finer two-micron filtration level – these filter elements cost from £40.

Fitting a pressure gauge between the tank outlet and the diesel-filter housing will indicate when the filter element needs changing.

There are scores of fuel treatments on the market that offer slightly different characteristics.

However, some are specifically designed to improve the performance of FAME-blended diesel.

A popular choice in the UK is FAST’s Exocet Gasoil Supreme, which includes a cetane booster to improve the performance of the fuel and a demulsifier to keep water out.

It also has compounds that disperse the soft biodiesel particulates and allow them to pass through fuel filters.

Another element cleans and protects injectors.

To help made sure farm fuel storage is suitable for FAME blends, the UK and Ireland Fuel Distributors Association (UKIFDA) has issued a series of guidelines, which are available via fuel distributors in its membership.

“Our advice has always been to give the tank a specialist clean before taking delivery of any biofuel or check on the tank immediately after, ensuring you keep the fuel clean and dry,” says technical manager Tony Brown.

Water is a big problem for sulphur-free gas oil containing FAME, so a degree of management is required to reduce the risk of condensation.

For high volume, fast-throughput storage, UKIFDA recommends keeping tanks topped up so that there is a minimum air gap to draw in moisture.

Conversely, smaller farms with low throughput should keep minimal fuel in stock – ideally, no more than six months’ worth.

If fuel is stored for longer than this, it’s worth dipping the tank to confirm that no contamination or separation has occurred.

The bottom of the storage tank should also be drained until clear fuel is seen and the inline filter should be changed before any fuel is pumped.

Traditionally, steel tanks were more prone to condensation than plastic ones, but the bunding ventilation systems on modern versions does much to eliminate this.

Steel tanks also tend to have fewer dead spots for microbes to dwell in and they’re generally harder for thieves to tamper with.

Tank filters are another must and these should be replaced after every two or three deliveries.

Regular examinations of filters, pipework and seals are recommended too, as well as looking out for any signs of water, dirt, mould or growth.

“Home remedies, such as fungicides or microbiological killers, may do more harm in the long run – those that do work may kill the bacteria but the dead growth on the bottom of tank can also build up and cause issues.”

It is also important to check that all parts of the farm’s fuel delivery system – such as the hoses, gun and gauges – are compatible with FAME and, if not, are replaced. This is because FAME can cause some rubber components to break down.

According to Mr Brown, additives may help reduce the current fuel problem, particularly where there’s evidence of filters being blocked by insoluble components of FAME.

“While further investigations and reviews take place, it is important that additives used in the fuel outside of the supply chain are at the correct rate and follow the manufacturers’ recommendations.”

He also recommends purchasing fuel through reputable suppliers only, ideally those who are UKIFDA members.

FAME
Fatty acid methyl ester is the biodiesel component used in blended gas oil and it’s made using various combinations of fresh and recycled vegetable oils, as well as some animal fats.

It goes through a process called transesterification, which breaks the oils down into fatty acids, esters and alcohol.

These are then blended with mineral diesel to make gas oil. Current concentrations are up to 7%.

Gas oil
Gas oil is the official name for off-road red diesel fuel, which meets the BS2869: A2 standard.

Many fuel suppliers offer a higher-performance version of this fuel, which meets the standard of EN590 road diesel.

Some machinery manufacturers stipulate that their machines should be run on this higher-grade fuel.

EN590 diesel
EN590 is the standard for automotive white diesel and it has a higher cetane value than standard A2 Gasoil.

However, it still contains biodiesel from various sources at concentrations of up to 7%.

The cetane number of a diesel fuel relates to its speed of combustion, and the higher the number, the faster the ignition and the better the performance.

Cetane additives are available to boost the cetane levels of lower-grade fuels.