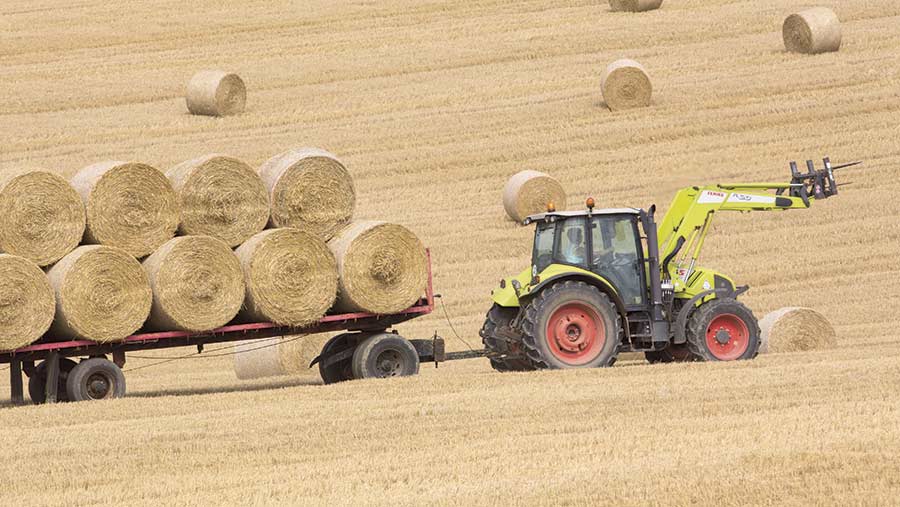 Maintenance of farm kit air conditioning systems is crucial to keep cold air flowing through the vents during the summer, and changes to refrigerant regulations mean it will save you hard cash in the long run, too.

With some refrigerants having a global warming potential 150 times greater than carbon dioxide, there has been a drive to make cooling systems more efficient and use smaller quantities of less-polluting products.

Gary Osgood of Hampshire-based auto air conditioning specialist AVACS, which offers services across southern England, has seen the trade cost of the most commonly used refrigerant (134a) rise more than sixfold in the past year.

Due to EU regulations, it will be phased out in favour of 1234yf by 2030 and he expects costs will continue to rise during that period.

“Loss of refrigerant is the most common cause of air conditioning problems and increasingly expensive recharging isn’t the answer – if your system is broken, get it fixed properly,” says Mr Osgood.

Here, AVACS runs through the most common faults and how they can be fixed, ensuring that systems are working as they should and repair bills are kept to a minimum.

In theory, your machine’s air con shouldn’t lose any refrigerant at all, but loss of refrigerant through leaks is the most common cause of failure.

Mr Osgood says that more than a decade ago, a loss of 15% per year was accepted, but that figure is now down to 5% as systems have improved and become more efficient.

The condenser is where most leaks can be found and they are almost always caused by internal corrosion due to a build-up of acid.

“When you get moisture in the system, water molecules react with refrigerant molecules to produce acid and over time it corrodes the inside of the condenser,” explains Mr Osgood.

In most cases, a straightforward replacement of the condenser will be required and the filter dryer should always be replaced with it.

Filter dryers become saturated with moisture and reduce in performance over time, so replacement will cut the risk of the new condenser being corroded in the short term.

Before recharging after a condenser replacement, the system should be hooked up to a vacuum and dried for at least one hour to remove any moisture in the circuit. 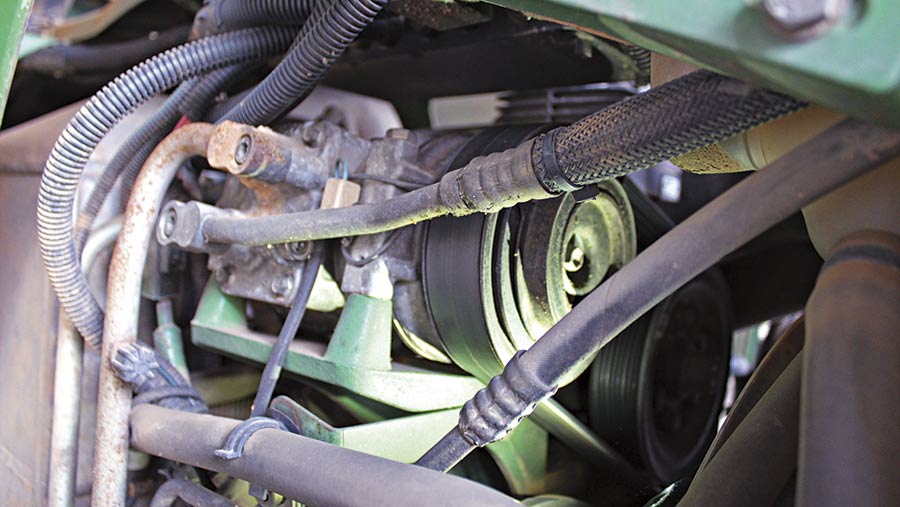 Leaks from the compressor aren’t as common, but can still be a major issue. A failure of the main compressor shaft seal is the most common culprit and is typically caused by lack of use.

“It can dry out and burn the seal and you get refrigerant weeping out, so my advice is to always leave the air conditioning running at all times of year,” says Mr Osgood.

Refrigerant also carries the system’s lubricant like two-stroke oil in a two-stroke engine, acting as a coolant and lubricant, so ensuring that it is running regularly and at the correct level will help reduce compressor wear.

Correct belt tension is also crucial in this, so where an auto tensioner is in place, check it is working as it should. Where there is manual adjustment, tweak according to the operator’s manual, using a tension gauge to get it spot on.

Where a part or complete compressor replacement is required, the filter dryer should again be replaced and the system flushed and vacuumed for at least one hour before recharging. 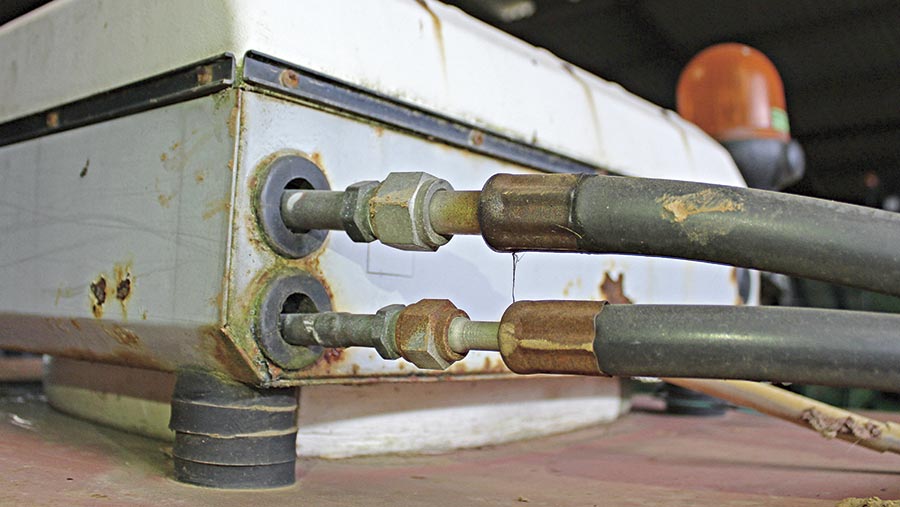 The sometimes long network of pipes that carry refrigerant around farm machines can fracture or rub through at pinch points. A tell-tale sign of pipe failure is a sudden loss of cooling, rather than a slow reduction in performance caused by leaks elsewhere.

The latest systems have largely replaced rubber pipes with metal to reduce the risk of failure, but it is still worth keeping an eye on rubber sections and addressing any potential chafing spots by relocating or cushioning pipes where possible.

The use of air con leak stoppers – a mix of refrigerant and leak stopping agent that solidifies when it meets air or moisture – is a subject of debate.

The optimum quantity of refrigerant is administered into each system gauged by weight, so it must all be drawn out to know how much needs to be added.

With leak stoppers, the mixture is forced in and can overfill the system, increasing the risk of introducing contaminants and humidity, which can kill performance of the expansion valves or orifice tubes and lead to malfunctions.

“In turn, contaminants can get in my servicing equipment and passed on into other customers’ systems, so I refuse to work on any machine where leak stopper has been used,” says Mr Osgood.

“Leak stoppers cost about £45 and the average repair bill for a leak is about £700, so I can see why people use them, but in the long run you will end up spending more to fix further issues caused by contamination.” 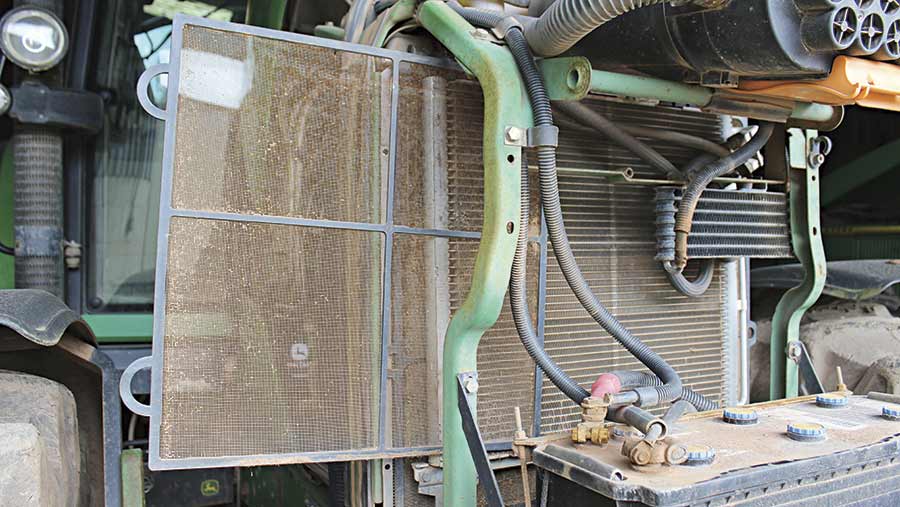 In the dirty and dusty farm environment, ensuring front grills, screens and condensers are free of dust and debris will maintain optimum air flow and keep the system working as it should.

While keeping cab filters clear is important for performance, reduced airflow through these will not have a long-term detrimental impact on the air con system itself.

Condensers typically have a cooling fan – either stand-alone or sharing the engine radiator fan – and if it isn’t working efficiently, it can cause over-pressure on the system and overload the compressor, causing it to fail.

It is a common fault and to prevent it happening, fans should be checked regularly to ensure they are in good working order.

“It’s important to keep the air flowing through the engine radiator too, because if the engine starts to overheat, the first thing the machine will sacrifice is the air con system to reduce load,” says Mr Osgood. 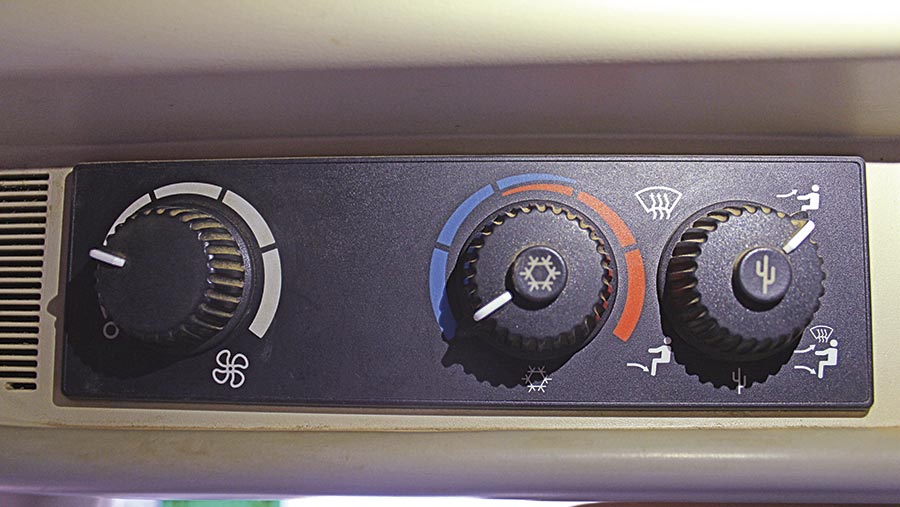 Although usually the most reliable part of an air con system, some electronic components can go wrong from time to time.

Typically, pressure switches that protect the system from over- or under-pressurising fail due to poor contacts or contamination and is easily solved by regular system maintenance. The temperature sensor on the evaporator, which controls the cycling or output of the compressor, can also fail.

Visual inspection of switches, sensors and connections should be carried out to pick up faults, while a pressure test can help identify any problems before they become critical.

Air conditioning systems are pretty much all the same – a sealed circuit comprising a compressor, condenser and evaporator, with a flow restrictor to change system pressure to alter the state of the refrigerant from a liquid to gas and back again.

Refrigerant in a gaseous state is compressed, increasing its temperature, and pressed under high pressure through the condenser to remove heat and change its state from gas to liquid.

It then moves to the filter dryer, which traps contaminants and moisture from the liquid refrigerant. It is then fed into an evaporator via the flow restrictor, where it changes state from liquid to gas.

As this happens, it cools rapidly and ambient air is drawn through the evaporator and blown into the cab as cold air. The coolant then heads back to the compressor to start the cycle again.

Air con circuit flow restrictors are either by an orifice tube or thermal expansion valve situated between the high-pressure side and the evaporator.

An orifice tube is fixed and relies on a switching the compressor on and off in cycles to regulate flow. Most air con system now have a thermal expansion valve to regulate refrigerant flow, because they are more efficient.