We had a shedload of entries to this year’s Farm Inventions Competition that shows farming ingenuity is still alive and kicking despite the abundance of clever technology now on the market.

Here we’ll take a closer look at the simple category, which is made up of machines with plenty of handy metalwork but without the need for an onboard engine or hydraulic system. 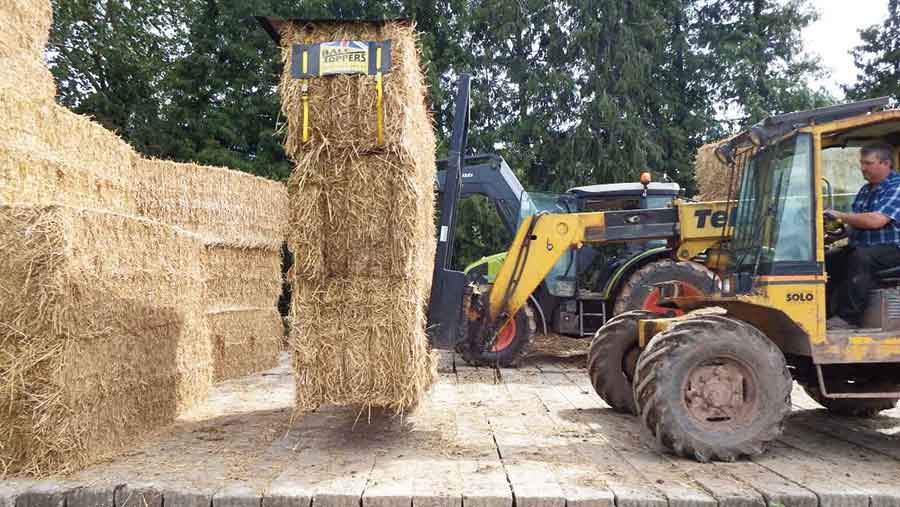 The 3mm thick plastic sheets come in a 9ftx4ft rectangle to comfortably cover a four-string bale.

Mr Powell uses a heat bender to fold them into shape, and the plastic is treated with a sunlight inhibitor to make sure the panels don’t warp, bend or crack come sun or hard frost.

Two ratchet straps are used to secure each topper in place on the ground before they are lifted onto the stack, where the angled edge latches on to the neighbouring sheet to form a watertight layer. 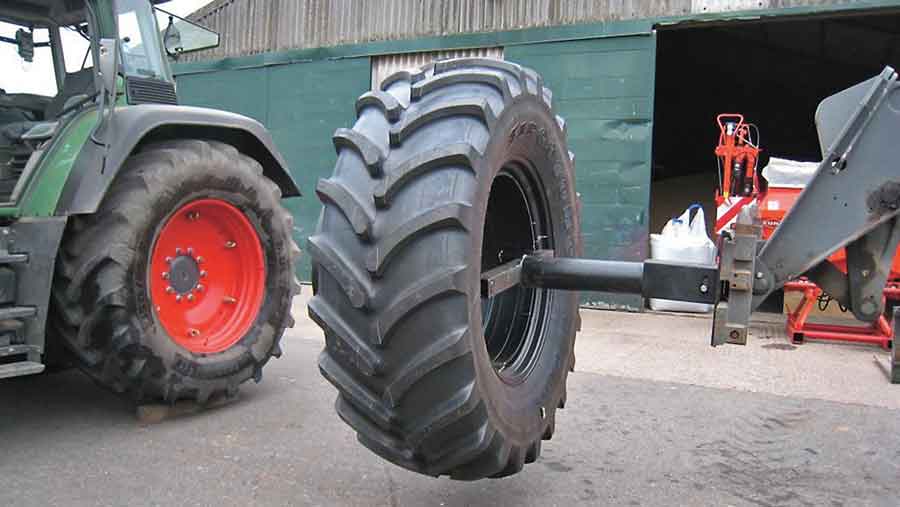 Fitting dual wheels can be hard work without the necessary man power, but Bill Clark’s carrier is designed to take some of the stress out of the job.

The farm runs an extra set of wheels on its Fendt 718 during autumn and spring drilling season to minimise compaction and improve traction.

The telehandler attachment is fitted with brackets to mount to a Matbro headstock and carries a central tube that slots into a big box-section body.

A bolt wound into the tube and through the square steel frame prevents any in/out movement, but the elongated hole means it’s possible to turn the wheel up to 20deg to help line up the locators with the main rim. 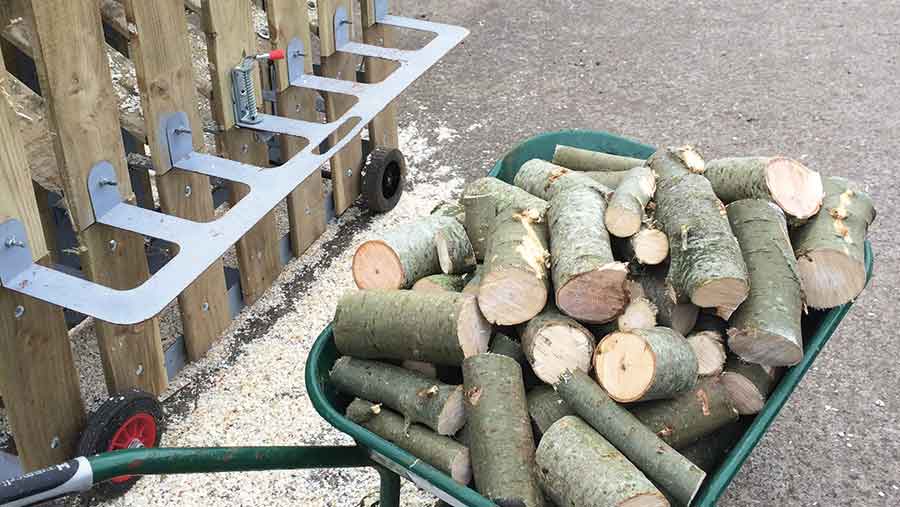 Chopping firewood is a popular winter pastime for plenty of farmers, and the side business prompted James Dinsmore to design his own log holder.

The metal base and easy-to-replace wooden frame holds 50-100mm diameter logs ready for lopping, and the pallet-style slots leave space for the chainsaw blade to slice predetermined 200mm lengths.

It allows up to 10 branches to be cut and ready to use in just over a minute, starting from the outside sections and working inwards.

Lighter branches can be held in position by cords and, once chopped, a pin frees part of the frame to swing open ready for the timber to be dropped into a wheel barrow. 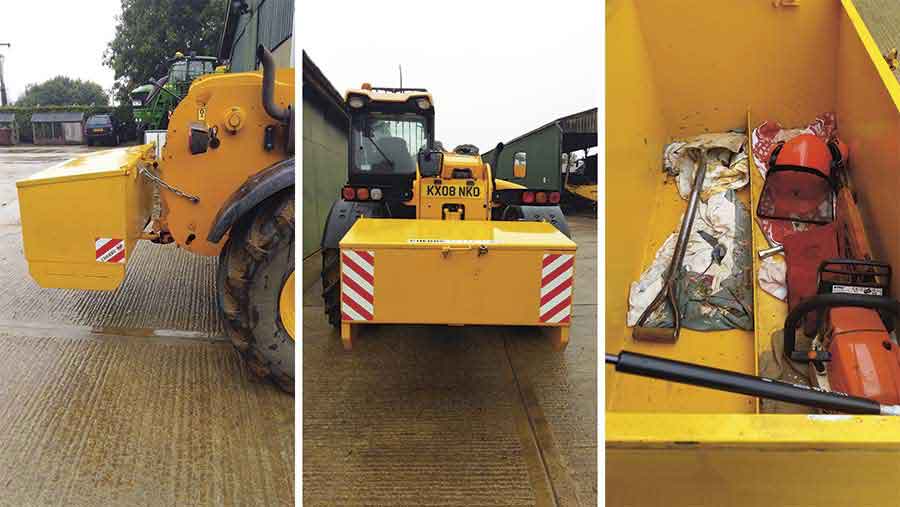 Storage space is a perpetual problem for telehandler operators, and it led to Oxfordshire farmer Jim Calcutt building his self-named Loadall Holdall.

The handy 4ftx2ft box can be carried in a muck grab or lifted on the loader’s rear pickup hitch. Chains hold it square as it’s hoisted, before a hole-and-pin bracket locks it in position.

On top, a pair of gas struts help lift the lid and a lock keeps the cargo safe – perfect for carrying up to eight cans of fuel, ratchet straps, chainsaws or other tools. 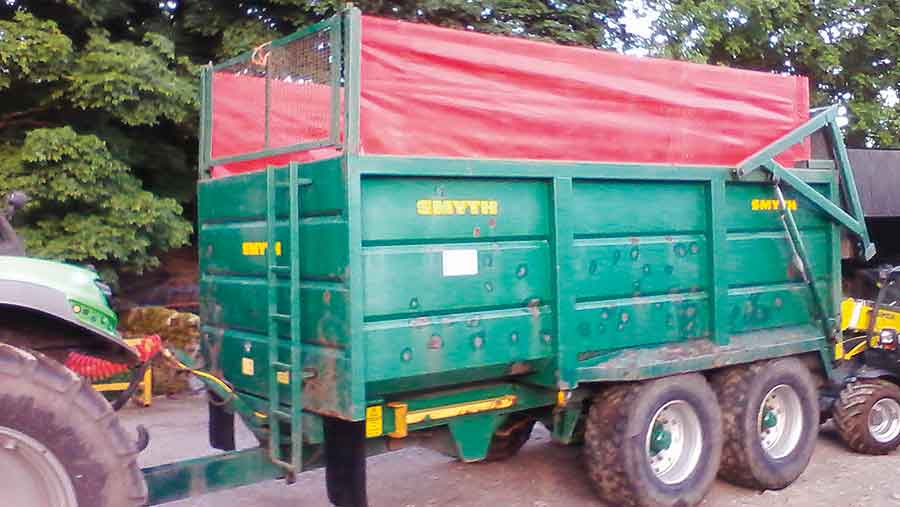 One-man-band operator Robert Hooper fabricated his own set of lightweight silage sides to ease the job of fitting greedy boards to his Smyth trailer.

His easy-to-fit system avoids the need of a telehandler or any nuts and bolts, and the tarpaulin sides guarantee that they’re light enough to lift alone.

Mr Hopper reckons he can fit the frame in less than 10 minutes and his design inspiration came from Eddie Stobart’s 44t curtain-siders carrying woodchip.

A local marquee hire company provided the tarpaulin sides, which are tensioned by a slotted rod that is wound tight with a spanner and held in position by a single pin. 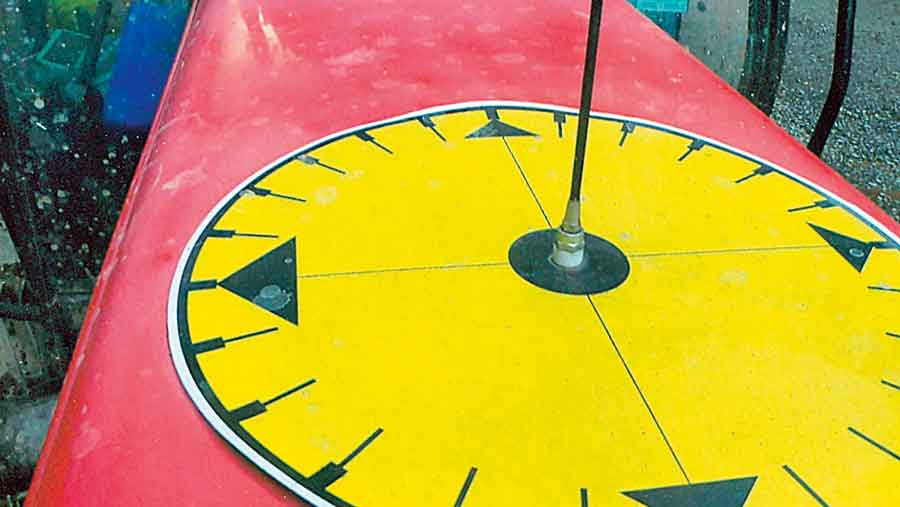 Modern tractors no longer have a central exhaust poking through the bonnet, so Thomas Duckett fitted a CB aerial to make sure he’s running straight.

The aerial is fitted to a £25 sundial, which gives him an accurate direction for squaring-up fields while ploughing. 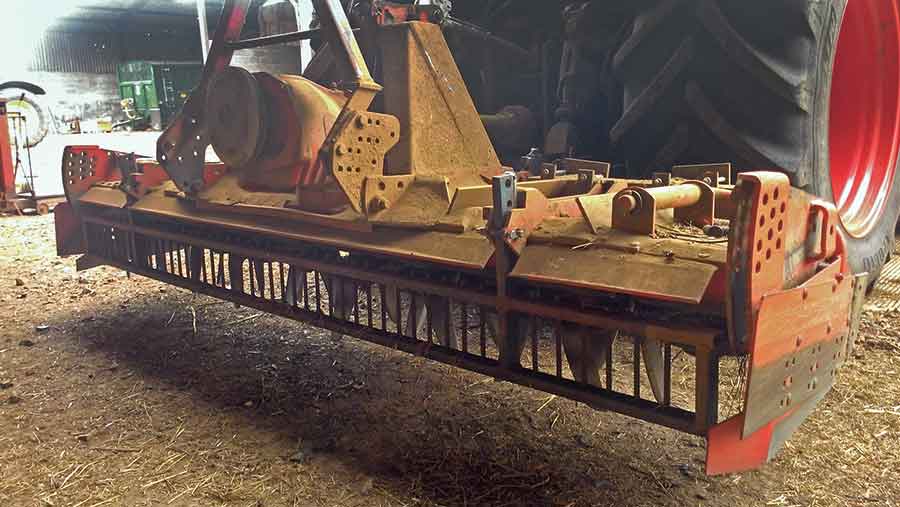 His fields across the Blackdown Hills sit on stony ground with just 6in of topsoil, so he set about building an adapted levelling board that would bury the bigger stones before covering them with a generous layer of topsoil during cultivation season.

His invention fits to the back of the farm’s 3m Kuhn power-harrow and a hole-and-pin arrangement offers basic depth adjustment.

The gaps in the grille are 50mm wide, which forces all but the smallest stones downwards and out of the way of the mower and forage wagon. 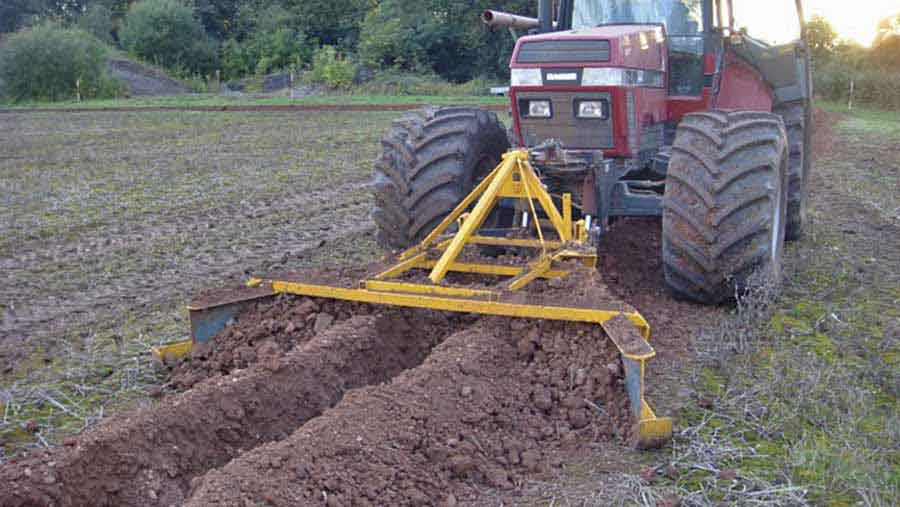 When Tim Smith decided he’d sort the drainage across his Worcestershire farm he initially planned to call in a local contractor to do the job.

But, after being quoted an eye-watering price, he reckoned a better bet would be to buy a 1980s Mastenbroek trencher and do the job himself.

To fill the slot behind it, he headed to the workshop with a handful of recycled metal.

Two 3m RSJs form the V-shaped dozer blades of the trench filler, while an Accord hitch joins it to the front of a smart-looking Case Magnum 7230.

The tractor travels at 8kph to fill the trench neatly with two passes, and it has clocked up over 25km in the last couple of years. 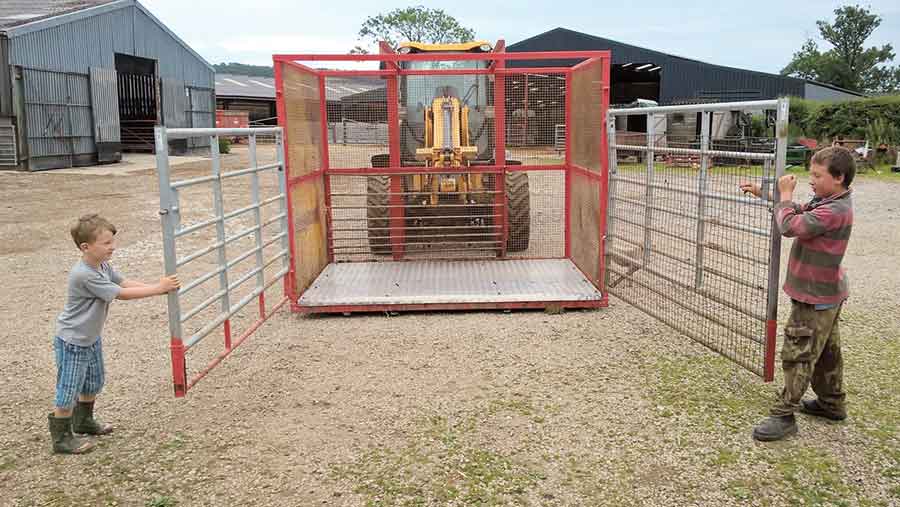 Cows can be prickly customers with a calf by their side, so Derbyshire-based mixed farmer Keith Harrop knocked together a 8ftx6ft box to carry livestock around the yard and to surrounding fields.

It fits to the pin-and-cone headstock of his JCB TM pivot-steer and took a few evenings to glue together.

Chequerplate flooring sits on a steel frame, with wire mesh on three sides. The front is accessed through a pair of galvanized gates that swing wide to get beasts in and out. 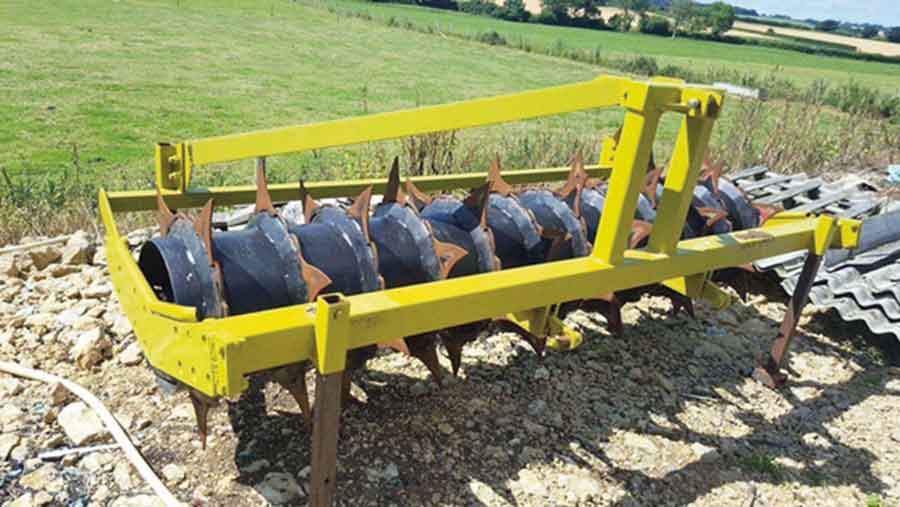 A redundant 3m power-harrow formed the base for Mark Hansford’s grassland aerator.

He built it to alleviate topsoil compaction problems across his grazing and mowing ground, with blades slicing through the surface to help muck and water soak away.

The implement is three-point linkage mounted and uses 40-or-so fins pinched from a long-in-the-tooth baler intake rotor to provide the cutting action.

A plug in the side of the drum offers a ballasting option if the ground is particularly hard. 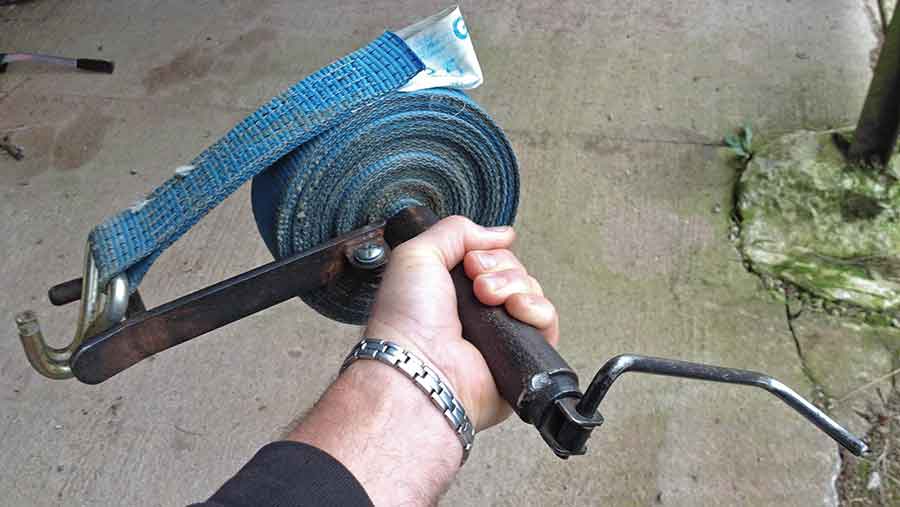 Wayne Heath designed his own fold-up winding tool to speed up the job of tidying 70m of strapping after every straw delivery.

The handheld item comprises a spinning inner steel tube that, at one end has a two-inch slot to hold the strap in place, and at the other, has a winding handle to reel the strap in.

The inner pipe is sheathed by an outer tube that forms the handle and also carries a hook to hold the metal end of the strap. 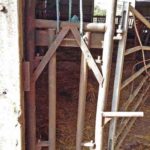 Alan Edwards’ cattle crash has earned its keep on the family farm for over 25 years.

A bar on one side secures the crush in position, but it can be removed to lift the frame out of the way.

A gate is hung on the same side as the bar, which helps to get the cows into the crush for calving.

Two cords secure the animal in the crush and pulling on one cord then releases it. 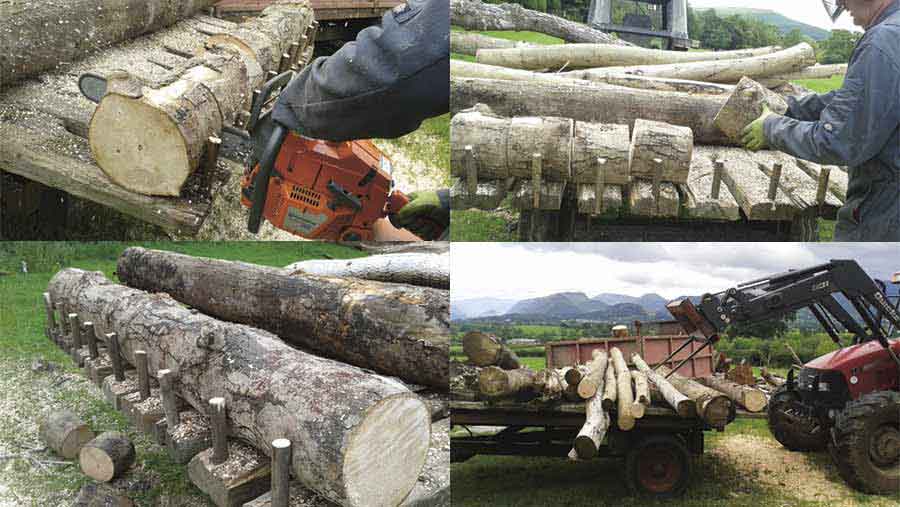 He used 7inx3in timber to form the deck of the trailer, running it lengthways from front to back and extending it 18in over the end of the steel frame to form the chopping platform.

He also left an inch-wide gap between each length for the saw to drop through at the end of the cut, leaving a row of neat 8in long logs.

Short dowels on the tail end of the deck stop lengths of wood rolling off. It means the trailer can be gently tipped to get the logging timber to the back ready for chopping once it has been loaded with a telehandler. 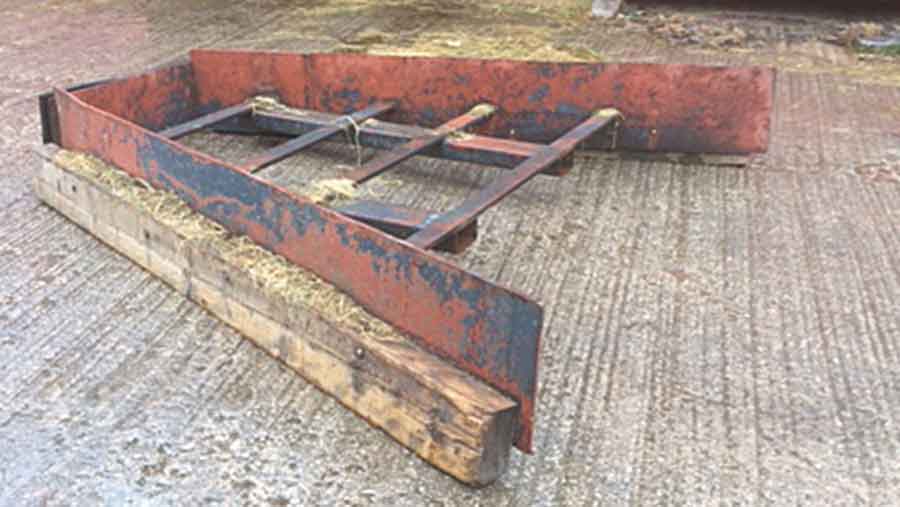 Silage pushers come in all shapes and sizes – some use tyres to push grub against the feed barrier, while Ioan Jones’ version uses an A-shaped steel frame shod with timber skis.

Rather than mounting it to the telehandler headstock, he simply used box section steel to form sleeves for the loader’s forks, and they also double-up as extra bracing for the central skeleton.

Seasoned inventor Rob Manford is back again, this time fitting a water tank and high-pressure road cleaning nozzles to a Suton sweeper.

His second entry is an additive applicator (left) for use with the farm’s round and square balers, which he designed and built after being quoted £3,000 for an off-the-shelf system.

The home-brewed version has hydraulic/electric shut off via the spool valve and mounts to the front of the farm’s 6150R on a simple L-shaped steel frame to the front linkage. 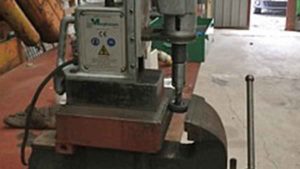 Pillar drills are a workshop must-have, but having already forked out for a big magnetic drill, Harry Nelson decided he would make an adapter plate to stand it upright on his bench vice, too – doing away with having to buy two separate drilling systems.

The simple steel box fits to any bench vice, and effectively becomes one jaw of the clamp to provide a stable platform for the upright-standing mag drill.

Handily, it can still also be used away from the bench, working on the building frameworks, for instance. 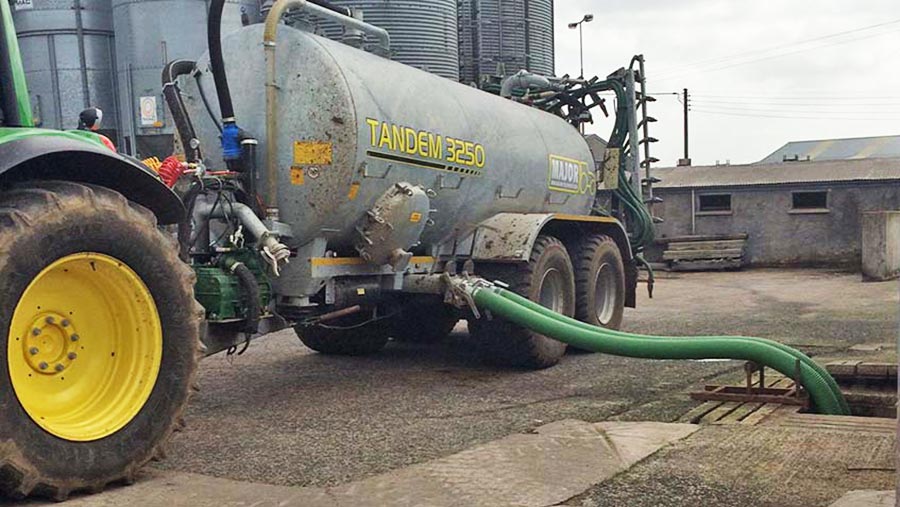 After upgrading his slurry tanker to a Major Tandem 3250, John Tate felt he needed something to protect the fast-filling hoses from wear and tear.

Using bits lying around at the farm, he tacked together a ladder-style frame and mounted a couple of rollers from an old conveyor to create a cradle for the two 6in hoses to rest on.

The build took less than an hour and makes the job of pulling the hoses up out of the tank and on to the filler points much easier.

It also means there are no sharp edges and provides two pressure points to reduce the strain on the 20ft hose as it bends towards the tanker. 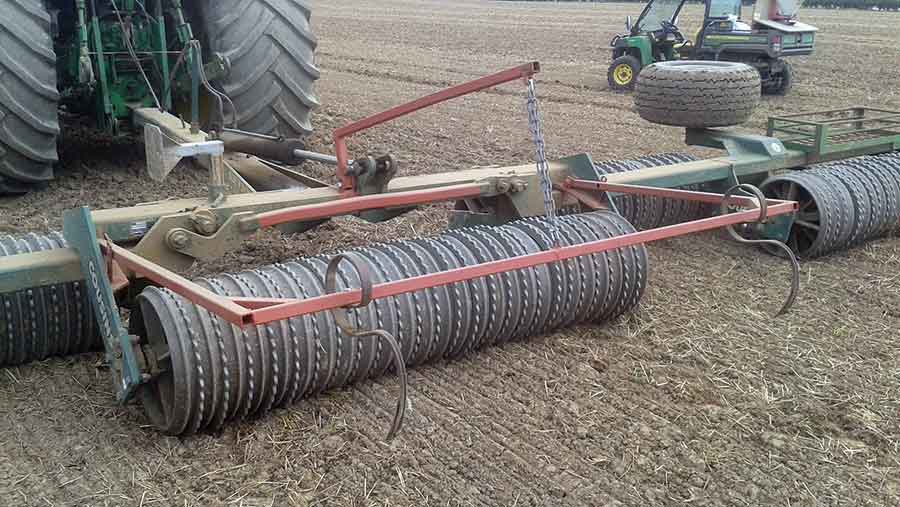 Subsoiler seeding kits have been a popular way of getting oilseed rape into the ground for several years now, but it obviously means there are no tramlines or pre-emergence markers for spraying before the crops gets up.

Without a good guidance system on the sprayer to rely on, Phil Metcalfe’s solution was to fit his own set of pre-em markers to the back of his Cousins Cambridge rolls.

It means he can roll the field using the tractor’s GPS, with the spring tine markers attached to the central gang by a simple steel frame.

The hydraulic folding system on the rolls provides enough travel to move the markers in and out of work.

A working prototype was built within a day, and the system is now used in cereal crops to re-mark the tramlines where pre-emergence herbicide is to be applied. 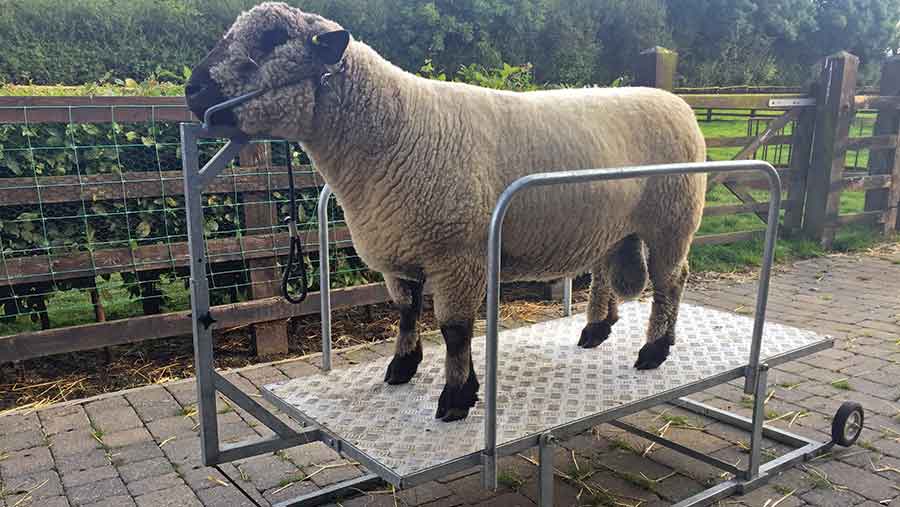 Student Louie van Geffen built a trimming stand for tame sheep with a pivoting chequerplate deck that falls level and locks into place once the animal is on board.

It means the sheep stands at a workable height while kept restrained by a telescopic headstock that can be varied to suit animals of all shapes and sizes, while the removable sides provide good access, too. 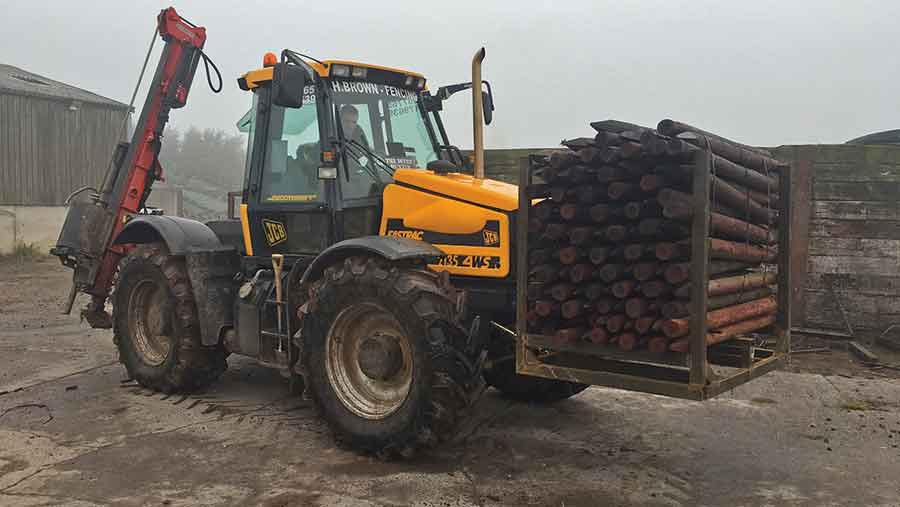 Fencing contractor Hamish Brown fitted a home-made post carrier to the front of his JCB Fastrac 2135.

The steel frame can be loaded with an entire pack of posts in one load and saves hauling a trailer around behind the knocker. 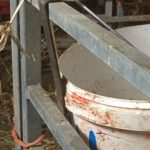 Sometimes the simple things can make a big difference – Richard Lambert’s bucket clips keep water troughs off the ground to avoid newborn lambs from drowning while in the mothering pens.

It also saves trying to tie them up with string in the early hours of the morning.

Note from the editor

Special thanks to everyone who got in touch with their inventions. For the competition to work we rely on farmers and contractors sending in examples of their workshop magic, and it’s great to see farming ingenuity is still alive and kicking.