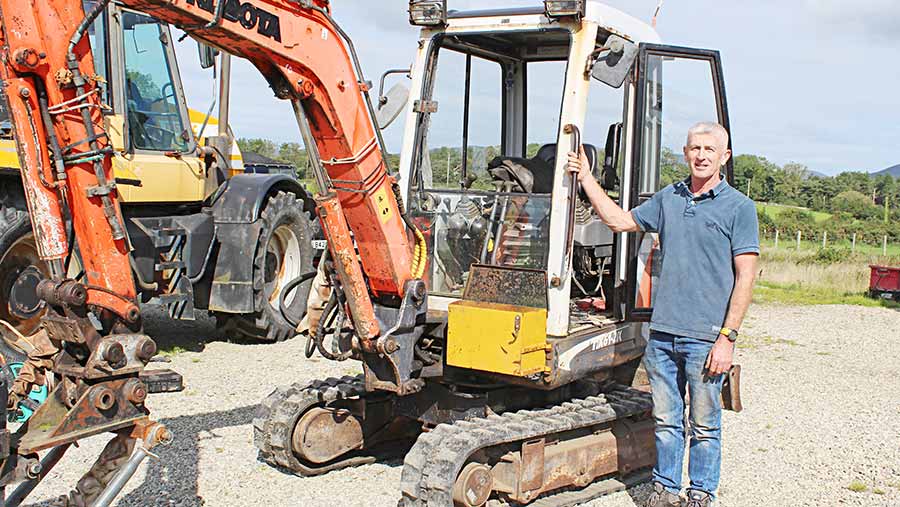 When it comes to ingenuity and resourcefulness, farmers seem to be in a league of their own.

And if the annual Farmers Weekly Farm Inventions competition is anything to go by, Northern Irish farmer Cyril Patterson is one of the most inventive of the lot.

Over the past few years he’s shown us all manner of clever engineering projects, many of which have been fashioned out of discarded junk lying around the yard.

As a part-time fencing contractor, he has produced several items to help with that particular job, but he’s also turned out a few ingenious creations for his family, friends and neighbouring farmers.

He’s not limited to the cheap and cheerful either, having built several high-quality bits of kit using new metal and parts.

We paid a visit to his home near Kilkeel, Co Down, to see what he’s been busy conjuring up. 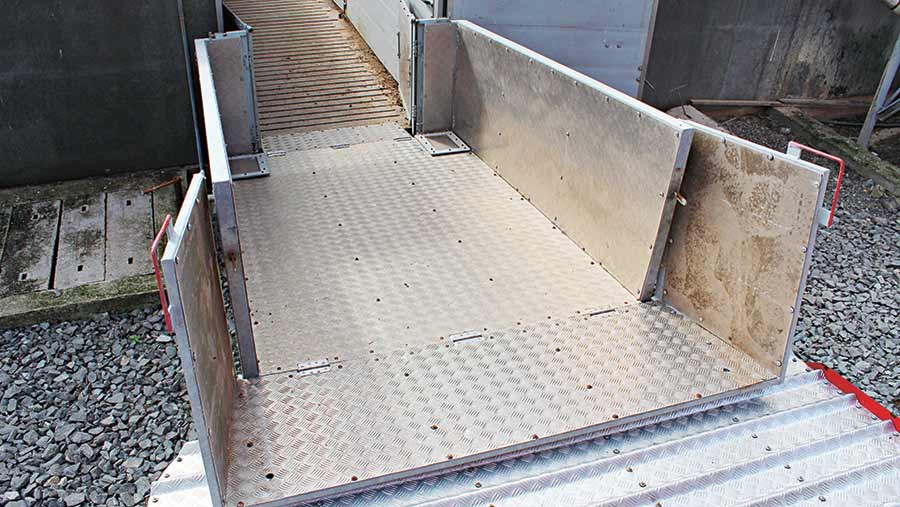 After being approached by neighbouring farmer Frank Houston to come up with an easier way to load his pigs, Mr Patterson invented this novel ramp.

Before starting out on the project, he did a bit of research into swine behaviour and discovered that the animals don’t like to ascend inclines of more than 20deg.

Therefore, his design centred around making sure the ramp could be kept at that angle, whatever the height of the passage or the slope of the ground.

To do this, he fitted screw jacks at the front and rear of the unit and added hinged sections at the top and bottom to give it a bit more flexibility. The width of the bottom ramp and gate is also adjustable so that it can be quickly adapted to different sized passages.

The sides are solid, too, to prevent the animals from getting distracted on their way up.

Finishing touches included fitting rectangular box-section slots underneath so that it can be shifted around the yard on pallet tines. It was also galvanised and fitted with stainless steel hinges all round to help prevent the corrosive pig muck taking its toll.

According to Mr Houston the ramp has transformed pig loading from a four-man to a one-man job and he says he’d seriously struggle without it. 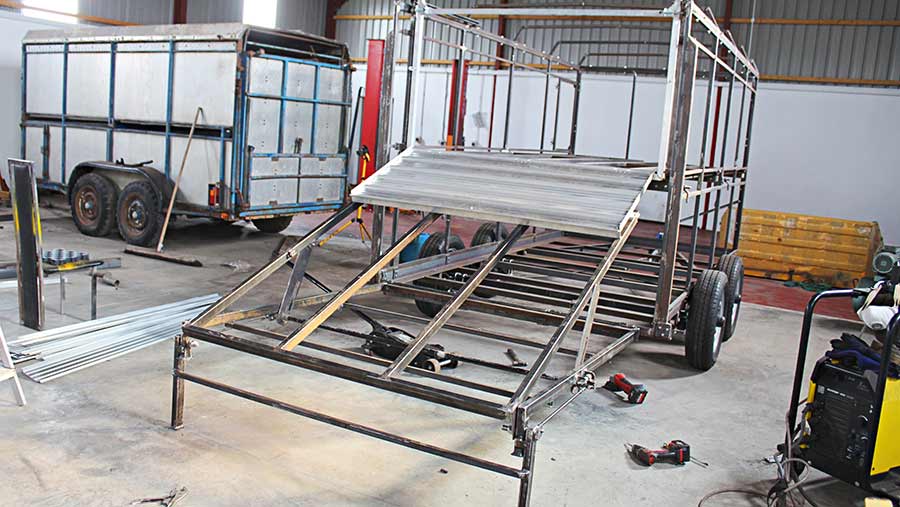 As a result of the pig ramp’s success, Mr Patterson set himself the challenge of building a multi-use livestock trailer with a 20deg ramp so that pigs can be loaded on to the top deck.

Its design is based loosely on a stock trailer he built back in the mid-1990s, but it also borrows a couple of ideas from Ifor Williams – the main one being the tailgate, which has a similar pop-up ramp arrangement.

To do this he’s fitted legs to raise the rear of the tailgate, thus slackening the angle, and there will be a foldout section to bridge the last foot or so to the ground.

Cleverly, he’s also come up with a way of connecting these legs to the levers in charge of lifting the ramp out of the tailgate. This means that the 20deg angle should be maintained even on undulating ground.

The top gate is well thought out, with a drop-down section to form the top of the ramp. It also slides up into the roof space of the trailer using a system similar to that of an up-and-over garage door. 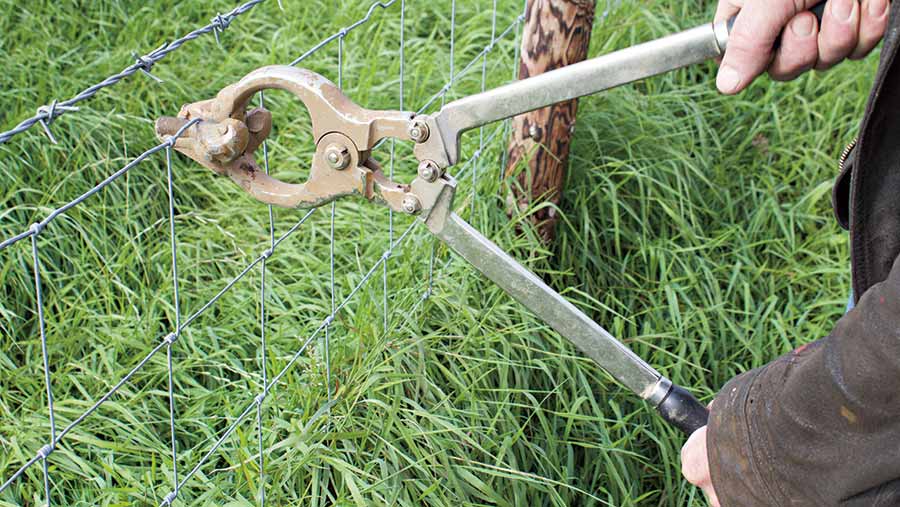 This simple tool adapted from an old castrator allows fencing wire to be crimped to take out any slack when going over undulating ground.

Mr Patterson made it by cutting off the original blade and replacing it with three welded-on bolts – two on one side and one on the other. In use the single bolt forces the wire between the other two, forming the crimp.

To take up larger amounts of slack, multiple crimps can be put into the wire.

This involves a 50m reel of bungee cord with marks painted on it every 8ft. This is then tied to the first strainer and stretched out to the second until the nearest mark is in line with it.

Because the cord stretches evenly along its length, the black marks stay evenly spaced, giving even post spacing without resort to a tape measure or any maths. 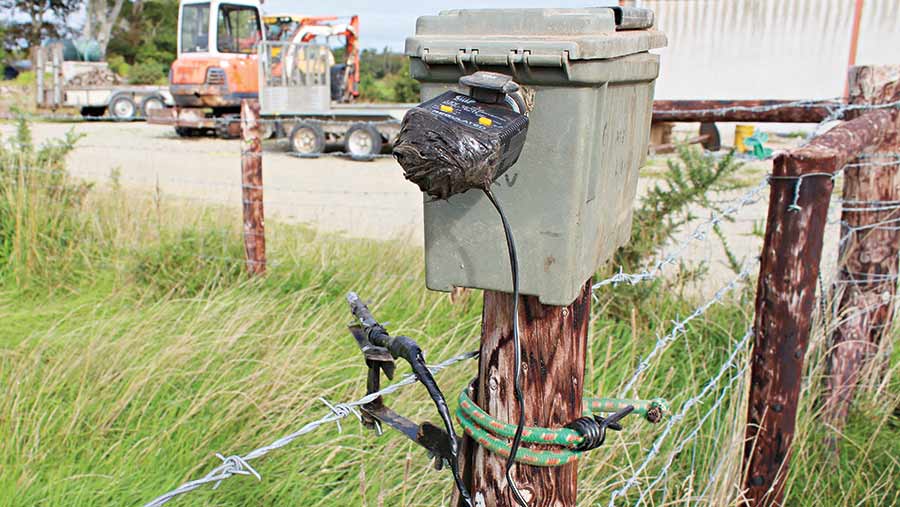 By adapting a standard laser pen, Mr Patterson created a nifty tool for getting posts plumb along a fence line.

He started by fitting the £30 pen with a clamp so that he could lash it to a post, before looking at beefing up the battery power so that it would last all day.

He did this by hooking it up to a 12V rechargeable power tool battery via a plug fashioned from a bottle top. This easily lasts for a full fencing session and can be charged from a cigarette lighter socket or the mains.

The whole setup is housed in an old ammo box, with a built-in socket for recharging the power tool battery. 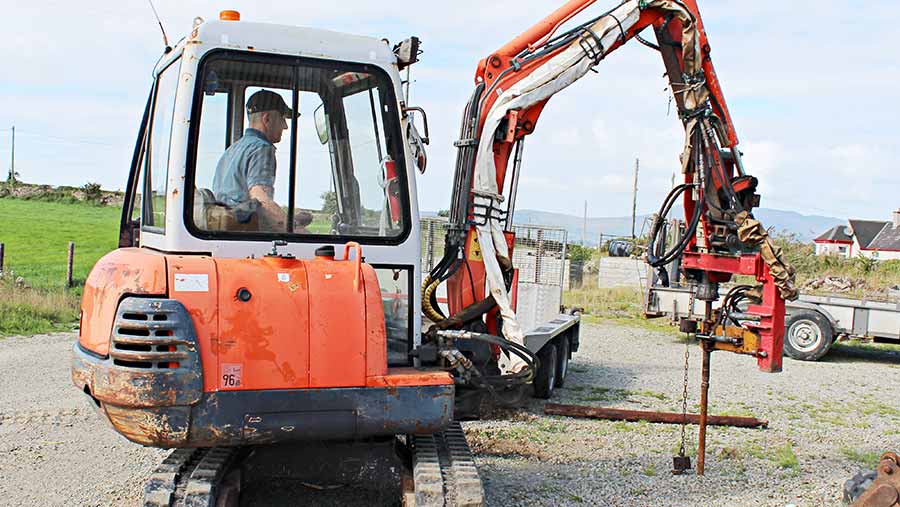 Rather than shell out thousands for a factory-built post knocker, Mr Patterson invented one to fit on his 2.6t Kubota mini digger.

The driver itself is based on a Takeuchi jackhammer attachment, with a cone on the end of the rammer to help locate the posts. He also added a hydraulic arm for picking up and steadying posts as they are driven in, as well as a plumb line to help get them straight.

For stony ground, there’s a rock spike made out of a couple of half shafts welded together, and for sticky conditions, a coring device fashioned out of a metal gate post.

At this point he found he was struggling for enough hydraulic services to power it so he fitted an electronic diverter valve to direct the flow from the Kubota’s dozer blade circuit. 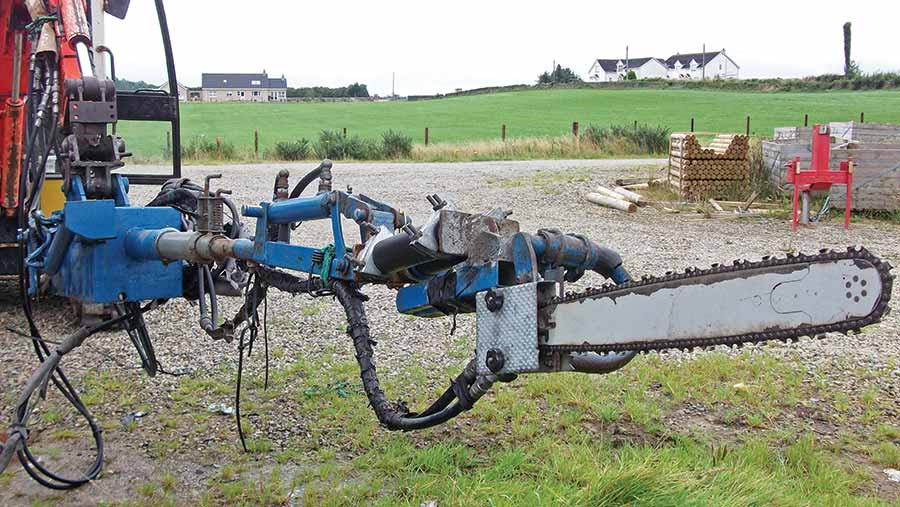 It’s designed for trimming tall trees and hedges, and has an extending arm made out of an old tipper lorry ram that allows it to cut limbs up to 15m away from the machine.

At the attachment end he’s also built a rotating mechanism that allows the saw to cut in any plane.

Almost all the parts were sourced from around the yard, apart from the hydraulic saw which cost £380 on eBay. 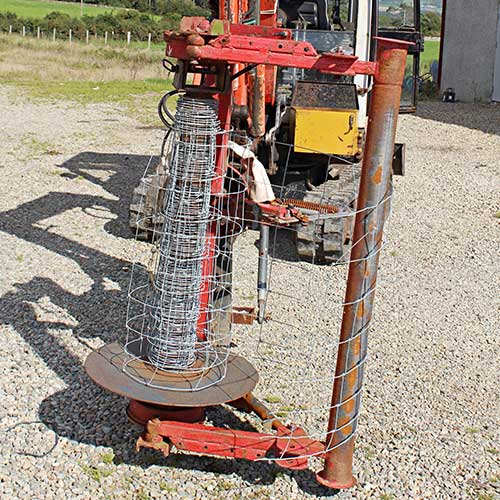 The final part of Mr Patterson’s fencing setup is this wire unroller, fabricated using a pair of hubs and the handbrake arrangement from a Vauxhall Vectra.

It attaches to the Kubota and holds a roll of stock netting or two rolls of barbed wire, and once one end is attached to the post, he simply reverses the digger to wind it out.

When he’s ready to tension the wire, he applies the “handbrake” to stop the hubs spinning, and then backs up a bit more to pull it tight.

Apparently no blood has been shed since he switched to using this method for rolling out barbed wire. 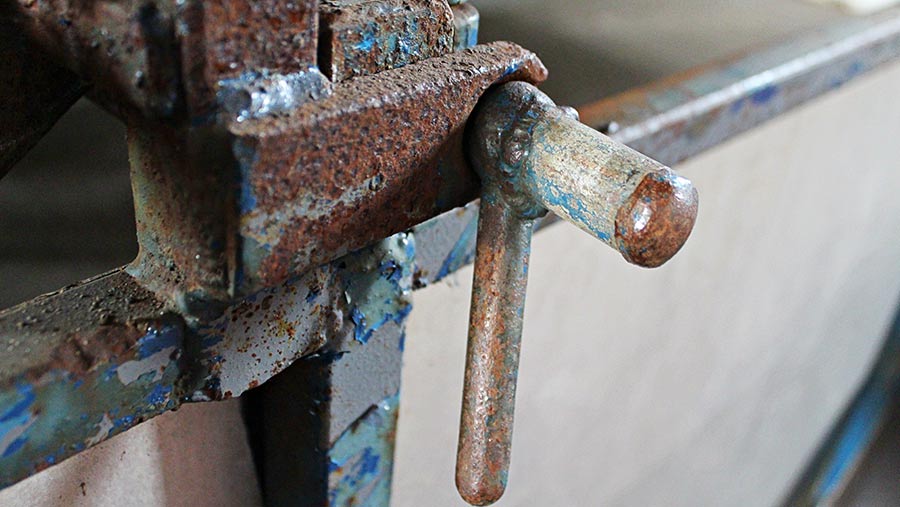 To prevent handle nuts drying out and seizing up, Mr Patterson welded caps on the ends and filled them with grease. They now stay silky smooth. 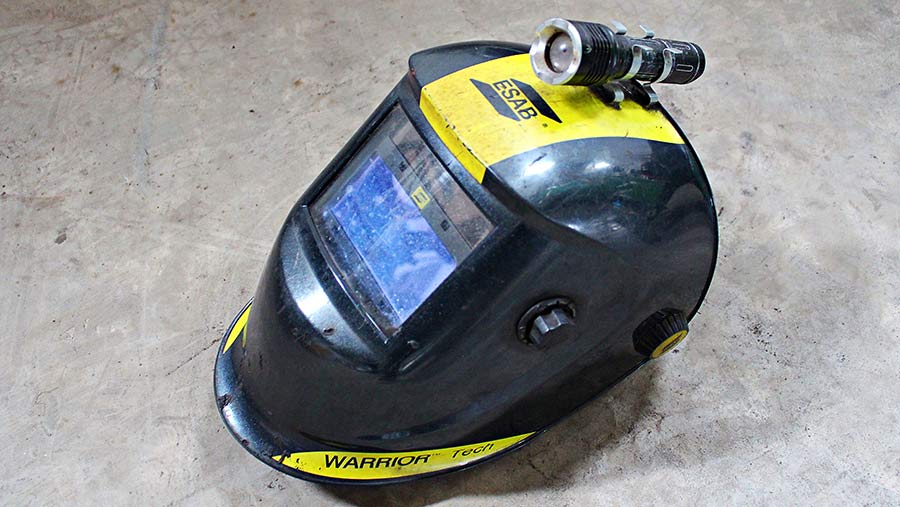 A couple of spring clips hold a rechargeable LED torch on his welding mask, meaning he can see what he’s doing when starting off a weld in a dark corner.