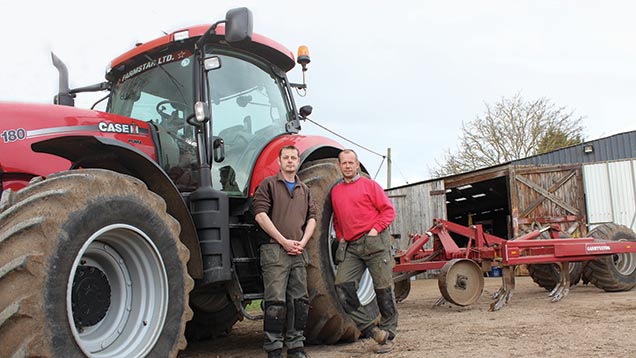 Rob (left) and Dave Gash with their Case Puma 180 and stubble cultivator.

Serial inventors Rob and Dave Gash spend most winters fabricating replacements and improvements to the kit they run across their 700ac of heavy Nottinghamshire land.

Blackgrass pressures have forced the brothers to rethink they’re cultivation and drilling regime, which has seen a number of new machines join the fleet in the past few years. Here are a few of our favourites…

Like most rape growers, the Gash brothers first toyed with the idea of broadcasting rapeseed behind their Ransomes subsoiler about 10 years ago.

Piggybacking a seeder on a subsoiler is a quick and easy route to establishment, but sowing depths are often inconsistent, plants vary significantly in size and pre-em herbicides are a no-go.

So, after a few basic sketches they set about designing their own 3m, six-leg machine from scratch that would use a more accurate system to get the seed into terra firma.

How was it made?

The legs themselves were pinched from a Ransomes Subtiller, though the wings were lopped off to reduce disturbance. Sleaford-based TWB machined a set of replacement for when the farm’s stash of Ransomes metal runs dry.

We go for middle-of-the-road Signet spanners. We try and keep them organised, and have the ones we think we’ll need in the tractor toolbox, too.

Along with the spanners we probably get the most use out of the gas torch and Migatronic welder. We are always chopping things up and gluing them back together.

Do you use cordless or air-powered tools?

We have cordless drills, but the rest we run off the Spaldings air compressor.

TWB is actually building our next project. It’s going to be a 6m double disc press and we’ve had a bit of input into the design.

We thought about converting our old Simba press but we wouldn’t have had enough adjustment without completely chopping it to bits.

We’ll also get on with painting the rape drill now we’re confident that it doesn’t need any more changes.

The packer section was part-provided by TWB but welded up on-farm. It cost £1,000 to assemble but is light enough to allow a Case Puma 180 to hoist up the whole outfit without a weight block.

What about getting the seed in?

Disc coulters provide consistent drilling depth. This time round a couple of bashed-up Horsch Pronto drills were the donors of a set of six disc assemblies.

The ticket price of each new coulter was a sobering £400, but trawling dealers’ graveyards and the second-hand market meant the final bill for the full set was a paltry £500.

Some came with worn bearings and broken headstocks, but a few hours’ work had the rigs bodged back together and a big wedge of cash saved in the build budget.

Threaded bars allow the operator to tweak pressure and depth, but once they’re set they don’t need touching.

How deep does it go?

The brothers are drilling rape at 2cm and just 40-seeds/sq m. Tray-type Stocks hoppers were an £800 buy several years ago and provide a metering system that can be varied on-the-go from the cab.

A recent £400 addition to the rig is a pair of 350-litre fertiliser tanks mounted close to the tractor’s back wheels. The close-knit set-up should improve balance and traction while sending a jet of nitrogen and phosphorous down behind the subsoiler leg.

An ATV sprayer pump provides enough power to push the liquid through the nozzles and there’s a simple regulator to alter the flow. It’s rarely adjusted, though, so the tougher parts of the field end up getting more fertiliser.

Has it done much work?

The new drill has covered well over 400ha with some promising results. OSR yields have risen from 1.5t/ac to 1.8t/ac and establishment is far more uniform.

A harder-worked member of the Gash machinery shed is the 3m semi-mounted cultivator that started life as a seven-leg Ransomes toolbar.

The brothers first wielded the gas torch and welder several years ago to add another row of legs and improve trash flow through the machine. Total tine number rose to nine and a drawbar on the back meant they could drag a set of discs behind. The consolidation job was done with a single Simba DD press.

However, £3,000 was enough to land a new Simba-style packer and set of levelling discs, which were permanently joined to the back of the existing rig. They were joined by a pair of travel wheels originally destined for the back axle of the farm’s old New Holland TX36.

The total build cost came to £6,000 – a snip compared with the price of a new machine. It now runs down at 15cm to stir up a tilth ahead of the Horsch Pronto drill.

Last winter’s project was a full refurb of a couple of second-hand, eBay-sourced bargains lined up to replace an ageing hay bob.

The missing tine arms were replaced, collapsed bearings sorted and both had a full strip down and respray. The final refurb bill came to £800 for the pair.

In a bid to reduce autumn passes the brothers set about converting a Techneat V2 spreader to replace the tractor-mounted Kuhn machine they’d previously been using to throw Avadex.

The 150-litre hopper was mounted to the drawbar of the farm’s 4m Horsch Pronto with a tube carrying granules to a motorised distribution head on the tail. That required uprating the fan motor from 200W to 350W to get the granules moving.

It’ll hold 10 bags of Avadex, which means fill-ups coincide with an empty drill hopper. The total cost was £2,000 – a big saving on the £5,000 it would have cost for a dedicated spreader.

Been busy in the workshop this winter?

We’re getting ready for another year of the Farmers Weekly Inventions Competition. You can get your entry in early by emailing david.cousins@rbi.co.uk with some high-res pictures and a bit of information about how it works.