Outside the sun beats down and the green stuff grows so fast you can practically hear it rustle. Yet here you are, stuck with a mower or strimmer which shows as much inclination to start as Charolais have of going where you want them to.

It’s at this point that interesting options tend to present themselves, like turning the thing into a novelty doorstop or sledgehammering it into an attractive and unusual paperweight. Yet often a small engine’s reluctance to run is down to something very simple.

Here we’re concerned only with poor starting, not iffy running although the two are often related.

A petrol engine needs compression, a good spark and viable fuel before it will burst into song. If this holy trinity are where (and when) they should be, then start-up will definitely happen.

So if a small engine shows no sign of life after half a dozen pulls, something’s wrong. Juggle choke and throttle settings and try again. If massive indifference is still the outcome after several such jugglings, launch into the troubleshooting routine below.

Poor starting can come from factors outside the engine as well as in it, meaning that simple lack of maintenance can bring an engine to its knees. This guide should winkle out the most common problems in small two- and four-strokes if followed stepwise.

Mostly you’ll need only simple tools – a plug spanner, screwdrivers, eyes and ears – plus a pinch of common sense, particularly on the safety side. Fuel and sparks in the wrong place will cause you dire harm.

Check these simple things as a first port of call.

Old fuel causes many woes. Petrol starts to go off after about six weeks in the can or tank it oxidises, loses volatility and increasingly takes on a varnishy smell.

Old fuel’s impact on starting (and running) varies from catastrophic to minimal, depending on its makeup, on time and on storage conditions.

Try new fuel first if an engine won’t start after winter or a long summer lay-up.

Empty the tank, refill, then either drain the carburettor or pump the new fuel through. Some carbs have a priming button or bulb, as above. Try using a two-stroke oil containing an antioxidant to extend mix storage life Stihl offers it.

Small engines are usually put away dirty. So spare an early thought for the air cleaner if it’s solid with oily crud, choked by sawdust or has collapsed, the engine won’t be able to draw enough air to run.

Check spark plug condition (see 10) then try starting the motor without the air cleaner. If that solves the problem, clean or replace the filter before work, as filters are cheaper than engine rebuilds. 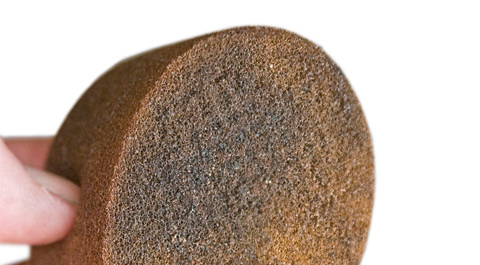 While you’re in the area, see that the choke flap (arrow) opens and closes on cue, and that you’re setting it the right way for starting. Mistakes are easy to make if the graphics wear off.

If the engine fires briefly on choke and dies, immediately back off the choke lever to about the half-way position and try again. If you don’t there’s a good chance that the engine will flood. 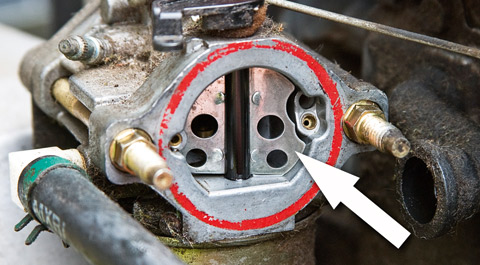 Two-stroke oil volume can affect starting. Most modern engines are set up for semi-synthetic or synthetic oil at 50:1 ratio, while older motors were usually designed for mineral two-stroke oil at about 25:1.

Too much oil produces plug deposits, which ultimately will hurt the spark and so affect starting. When running, the wrong oil volume changes fuel flow through the carburettor (affecting the mixture), while too little oil risks seizure, particularly with today’s high-revving, thermally-stressed engines.

Buy only quality two-stroke oil. And unless you have a particular death wish for your engine, don’t even think about trying hydraulic fluid, chain oil or old sump lube some do, but never for long. 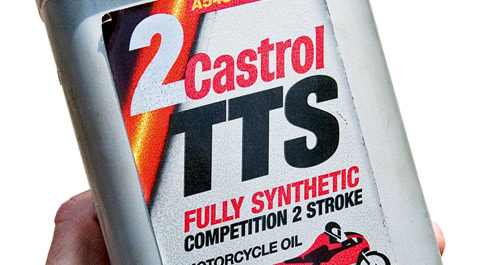 Fuel and air must be squeezed hard by the rising piston or it won’t burn. Compression doesn’t have to drop by much before a small engine won’t start.

Visible clues to potentially poor compression are a wet exhaust and a carburettor airbox damp with fuel (two strokes) and heavy oil staining around any external breathers or a dipstick tube (four strokes).

* Safety: For the following tests it is essential that the ignition is switched off and the plug cap removed.

* Safety: Ignition voltage can kill or ignite fuel. Don’t hold the plug with bare hands when pulling the starter cord. Keep the plug body grounded (earthed) on the engine’s fins when spark testing, and well away from the fuel filler or vapour blown from the open spark plug hole.

With ignition disabled, hang a saw or strimmer from its starter cord. If it drops in a series of jerks, compression is OK if it falls freely then either a decompressor is operating (see next) or compression is below par.

With mowers and other fixed engines you should feel definite, repeated resistance on yanking the starter cord. If the engine claims “Easy Spin” or similar starting, turn it briskly by hand against the normal direction of rotation, when it should bump against compression.

In every case, significant regular resistance suggests compression is high enough for the engine to start. 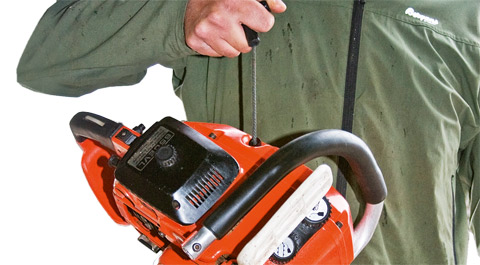 Some modern engines have an external decompressor. Normally this will bleed just enough compression from the cylinder to allow easy pull starting. If it wears, loosens or gets damaged, it may leak so much pressure that the engine won’t start. 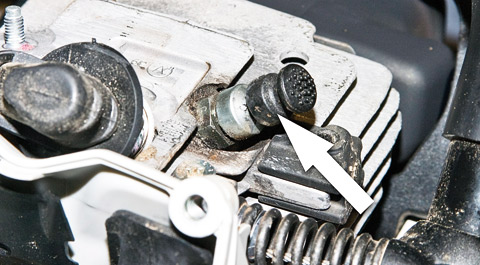 If compression is low and you hear a regular whooshing or whistling as you turn the engine over, suspect a damaged head gasket, loose head or a canary stuck in the fan.

Otherwise poor compression is usually down to leaky valves (four strokes), or worn/stuck piston rings (two- and four strokes). Take out the plug and squirt a few drops of clean engine oil into the cylinder.

Pop the plug back, then try the compression test again. If it improves substantially, worn or stuck rings are likely. The engine may now start, too. 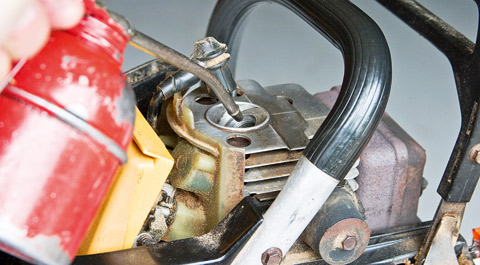 To start promptly an engine needs a clean, dry plug firing a fat spark at the right instant. About five times the energy is needed to create that spark under compression than to make it in air, so not just any old spark will do.

Wedge the plug body tight against the engine’s cylinder fins, clear of the carburettor, fuel tank cap and plug hole.

Switch on the ignition (!), activate any safety interlocks on the machine then pull the starter cord. A shower of fat blue sparks shows the system itself is OK, though the timing might not be see (9) below. 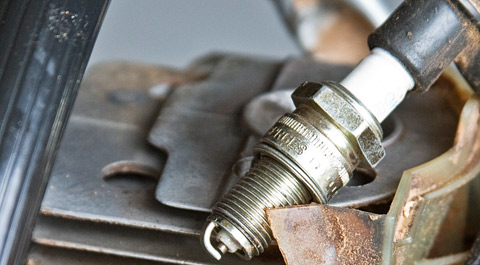 Better yet, an adjustable spark tester like this one from Stihl lets you check ignition quality with the plug in place.

Healthy electronic ignition, as fitted to most engines after the mid ’90s, should throw a spark across a 6mm gap. Conventional points ignition should manage a 3-4mm gap.

This and similar testers can also be used with the engine running to pinpoint misfires. Less whizzo, but cheaper, is to make your own tester. Buy a new plug, open its gap to 3mm (0.12in) or take off the side electrode altogether, then use it as in (7) above. 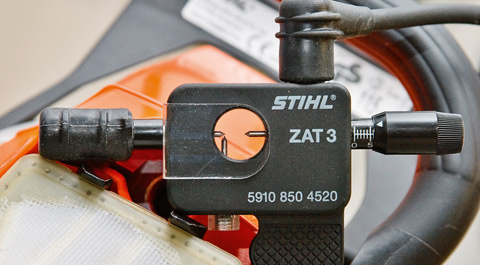 Small engine ignition timing is often tied to flywheel position relative to the crankshaft, which is set by a key (arrow).

If a loose flywheel wears the key, or if something attached to the crankshaft – like a mower blade – comes to a sudden stop, the relative position of flywheel and crank changes and ignition timing shifts.

This can show as an engine that kicks back, or even tries to run in reverse. If you have a fat spark and a clean plug, but still no go, check the key visually before moving to the fuel system. 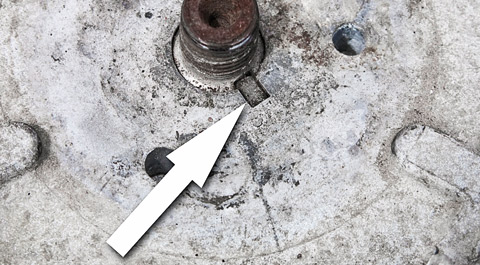 Where the ignition system and timing test OK, but the engine still won’t start, be very pernickety about the plug, especially with two-strokes.

Under compression the spark can track to earth through carbon fouling, even though the plug may spark at the gap in air.

If the motor still won’t fire, hold your breath until Part Two of this series then investigate the fuel system. 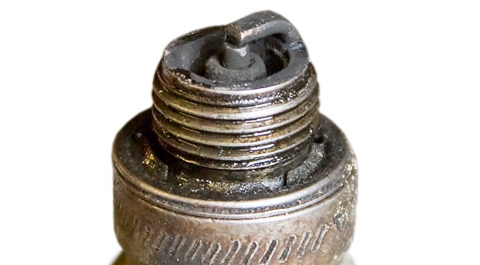 If there is no spark with a new plug or only a feeble effort, sort out the obvious first. On machines with safety interlock switches (eg, on a mower’s seat, cutting deck or foot clutch) see all wiring and connectors are intact and not shorting to earth.

Look hard at the engine’s kill switch if a lead is disconnected (arrow) the motor will run but not stop, whereas a shorted wire – for example, against the engine’s fins – will kill the spark, perhaps intermittently.

The plug lead and cap must also be in good order. If everything looks OK you’ll have to dive deeper into the ignition. But that, along with fuel system checks, must wait for part two. 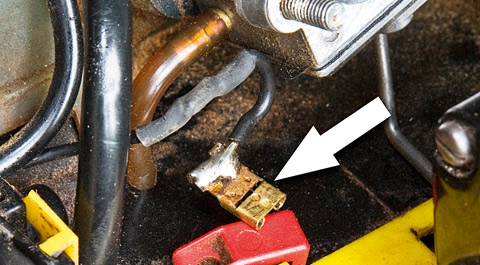