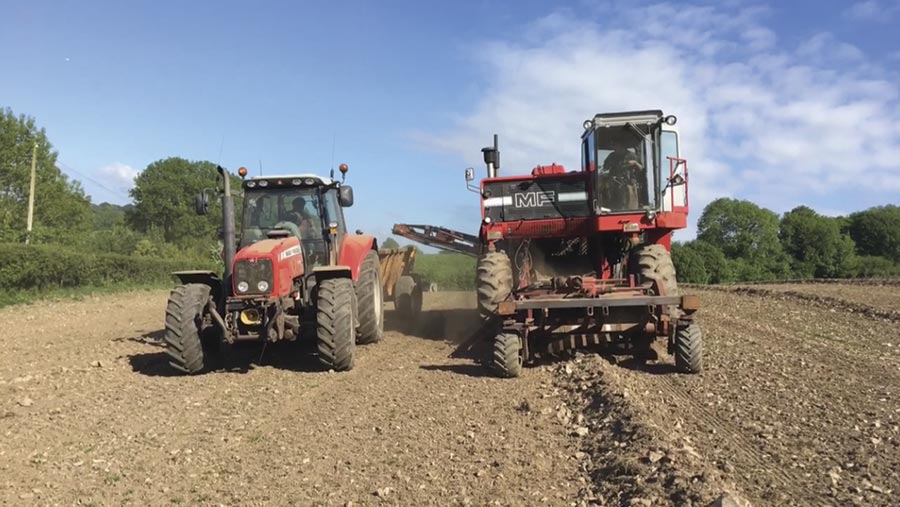 The Stonebine, built by Jack Bailey and his colleagues at Dorset-based contractor and engineer GJ Agri, is our 2020 inventions competition champion.

Having scoured the market for a suitable stone-picker, he could only find machines that used spring-loaded tines to flick rocks into a big hopper.

However, this is no good for the farm’s building-grade flint stone – worth £65/t in good condition – as it tends to deliver a dirty sample.

The sprung tines also have a habit of cracking the flint, obliterating its sell-on value and leaving razor-sharp shards across the field.

The priority was a self-propelled machine with a side cab that would leave ample space for the elevator to run under the engine, so when a 1970s Massey Ferguson 500 series combine came up for sale, they snapped it up.

Watch a video below of the Stonebine in action and read the rest of the report below:

The picking and processing elements include a second-hand Reekie 300 SA digging rotor and web, and an Extec 5000 elevator.

One of the biggest expenses was a trommel screen, which was home-built because there was nothing reasonably priced on the second-hand market.

This runs oil to separate hydraulic motors on the auxiliary services, including the trommel and front and rear elevators.

To give an idea of output, it picked roughly 1,250t of flint from a 4ha field in one day, some of which was already raked into a line.

Now the idea has been tried and tested, Mr Bailey plans to improve its aesthetics, and it will eventually be tidied up, shot-blasted and painted.