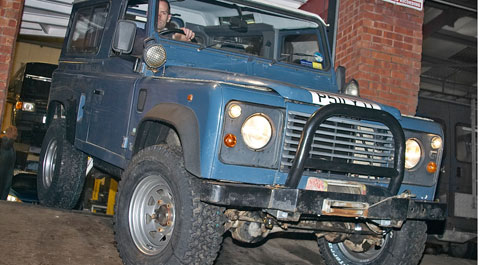 When the tin worms bite deep into an old Land Rover’s vitals, the writing goes on the wall.

The letters can be smudged and the MOT man placated by patching over the rot, but sooner or later that won’t be enough. Then there is only the Great Scrapyard in the Sky.

But there is a way out. For about £2,500 you can have a new galvanised chassis, thwarting the knackerman for at least another decade. Spend a little more and you can have other niggles sorted at the same time, saving on labour costs thanks to easier access when the body and chassis are apart.

Sound attractive? Here’s a look at the costs, the cautions and the job itself.

Various independent Land Rover specialists around the country offer a re-chassis service. For this one we revisited AL Services in Poole, Dorset, where the team will change a chassis in two to three days depending on how much secondary work is needed.

The economics of the job depend on what vehicle you already have, or can buy cheaply. An MOT-failed 90/110 or Defender is worth £500-£1000 to a specialist breaker, depending on model.

The 1996 Country 90 featured here had not reached that stage, but the chassis had already been patched and was on its way out. In good order the car would be worth £7000-£8000, so a re-chassis made financial sense.

Farm 90 pickups of the same age with a 200Tdi or 300Tdi engine fetch perhaps £1000 less, but the job still stacks up. To check the economics for your own vehicle, take it to whoever will do the work, ask them to drive/inspect it, and then together itemise the costs.

Proprietor Andy Lanham stresses the importance of gauging the vehicle’s overall condition before taking the plunge, pointing out that the engine bulkhead – the panel holding the windscreen and the front vents – is also prone to rust.

Repair cost here depends on the extent of corrosion.

Minor rust in the vertical pillars is easily patched, and will not quickly re-surface if the area is subsequently wax treated. But if not has attacked the double-skinned areas by the air vents, then bulkhead replacement is the best way forward. And that can add £1,000 to the final tally, he warns. Other trouble spots – doors, footwell panels – are either cheap to fix or not MOT relevant.

The 90 pictured here had no bulkhead woes, despite having spent most of its life in boat-launch service with the RNLI. But it needed a new clutch (spotted in a pre-job test drive) and other small items. It’s owner decided to add a 50mm (2in) lift to the ride height through longer springs and dampers, a synthetic suspension bush kit, chunkier tyres, and other bits ‘n’ bobs to suit the car better to green lane travel, none of which is needed for farm use.