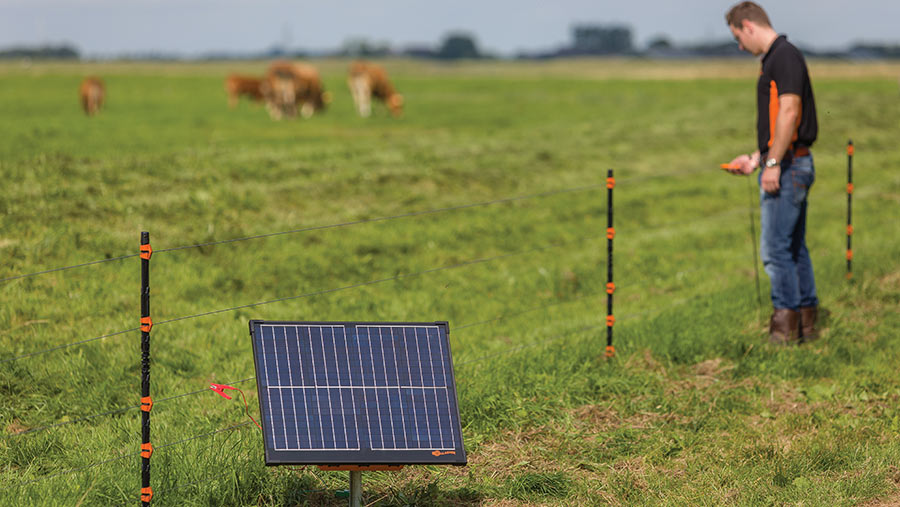 Putting an end to the monotonous charging and distribution of electric fencer batteries would be a boon for any livestock farmer.

So, it’s no surprise that interest in solar-powered energisers has been gathering momentum over the past few years.

Smaller integrated units were the first to be introduced to the market, offering a light, handy package that’s ideal for short runs, such as setting up a modest strip-grazing system.

Although some promise to cover reasonable distances, it’s important to note that these are a bit like mpg figures in the car world – they’re only achievable in the best possible conditions, when the sun is blazing, the best-quality wire and earthing are in place and there is no vegetation clogging the line.

In the real world, where the undergrowth will get unruly and ground conditions give a less-than-perfect earth, these figures are going to be lower.

Some large all-in-one fencing units are now available, but for stock farmers in search of a year-round system that takes the pressure off battery charging, it often makes more sense to buy a solar-assist panel to work with their existing fencing unit.

During sunny spells, these have the capacity to run some of the largest 12V energisers without drawing any power from the battery during the day.

Giving the cells just night-time hours to cover means the battery will go far longer without needing a charge from the mains, which saves time and prolongs its life.

Most of the main energiser manufacturers will offer solar-assist panels to complement their units.

But for those who want to save a few quid, it’s possible to source panels and the components independently. However, it’s crucial to make sure the panel is a suitable size for the fencing unit.

With the help of independent electric fence repair specialist Arran Lange of AL Electric Fencing, we take a look at the steps involved in getting the perfect solar-assisted setup.

Most 12V battery-powered energisers are good candidates for pairing with a solar-assist panel.

Farmers who already have an energiser suitable for their requirements can skip straight to the section on solar panels, but the following pointers will help if one does need to be purchased.

Output is the first consideration, and this is measured in joules (J). Some brands will quote the unit’s stored energy, which relates to the amount of energy contained within the energiser.

However, the output figure is more important, as this gives an accurate indication of how much energy will pass out of the unit and travel down the fence line. There isn’t always that much difference between the two figures, though.

In real-world conditions, 1km of fencing wire requires about 0.5J of energy, so once an estimate has been made of the distance needing to be fenced, it’s relatively straightforward to pick a suitably sized fencer.

It is important to remember that distance ratings usually refer to a single strand of wire, so a three-strand fence will need triple the output.

Vegetation also limits energiser performance – a bit like holes in a hose pipe reducing the amount of water reaching the end – so in areas where this is expected to be high, it is worth investing in a larger unit or taking the time to keep the fence line clear.

Opting for a higher-powered fencer has a similar effect to opening the tap on the leaky pipe, meaning more voltage will reach the end of the fence line.

How big does my fencer need to be?

Getting the correct size of solar fencer for the amount of ground you need to cover is one of the most important considerations.

It’s also worth going slightly bigger than current requirements, so there is capacity to expand over time.

The “Fence length guide” table (below) gives a rough guide of the linear lengths of fencing required for different-sized fields, and the second table has the fencer requirements to cover that length.

Google Maps can be used to give a more accurate indication of fence length. On satellite view, click on a point in the corner of a field and then right click and select the measure distance function.

Selecting each corner of the field will then give a calculation of the perimeter, as well as the field size. The line can be dragged to get the correct field shape. The ACME Planimeter is another nifty tool for doing this.

Output voltage is another spec worth looking up, as the unit needs to maintain a minimum of 3,000V at the end of the fence line to contain livestock. This is particularly important for sheep, as they are well insulated.

There are plenty of cheap solar panels available online, but a degree of research is needed before buying one and hooking it up to a battery powering an energiser.

Buying a panel that’s too small results in little extension to the battery life, while choosing one that is too big can risk damaging both the battery and the energiser, unless the output is regulated.

The simplest way to get a suitable panel is to source one through the energiser manufacturer, as it will ensure the units are compatible. But those who want to shop around for a decent deal will need to follow a few golden rules.

However, the reduction in power output from the panel during the night and on dull days means the batteries will eventually need charging from the mains.

Upping the panel size to 50W can help offset that difference and, when teamed with a decent battery, this setup could probably cope with year-round operation in UK conditions without any additional charging.

Secondly, it’s important to note that larger solar panels can put out more than 20V when they are working at full capacity.

The ideal voltage for 12V battery charging is just over 14V, so continually bombarding it with high voltage on a sunny day won’t do the battery or energiser much good.

The answer is to fit a charge controller. These are simple to wire in between the panel and battery, and ensure the voltage stays at a safe level.

Once the system is set up, it’s sensible to use a multimeter to make sure the output voltage is correct. The panel should point due south and be free from shade to work to its full potential.

When shopping for a solar panel, buyers will generally come across two different types. Monocrystalline is the more expensive option and these have solar cells made from a single crystal of silicon, which is said to make them more efficient.

Polycrystalline, meanwhile, are made from many fragments of silicon that are melted together. The easy way to tell them apart is that monocrystalline panels are black and polycrystalline have a blue hue.

Prices for solar panels vary considerably but, as a general rule, a decent 50W monocrystalline unit can be sourced for £150 or less and charge controllers can be picked up for under £50. Expect to pay a bit more for panel setups from energiser manufacturers.

Although plenty of people run fencers off old tractor and car batteries, they’re not ideal for the job.

This is because they are not designed for repeated discharging and charging cycles, and the thin plates eventually give up the ghost.

However, using a solar panel with this type of battery can significantly extend its lifespan, as it is getting regular top-ups, rather than running full to flat all the time.

A deep-cycle leisure battery is the preferred power source, and 70 ampere hour (Ah), 80Ah or 110Ah units are the best choices for larger fencers.

The bigger the amp hour, the longer the run time, so teaming a large fencer with a 110Ah battery and 50W panel will get close to achieving charge-free running.

Arran Lange of AL Electric Fencing has been fixing electric fence energisers at his workshop in Chesterfield, Derbyshire, for almost a decade, and has experience of all brands commonly found in the UK. 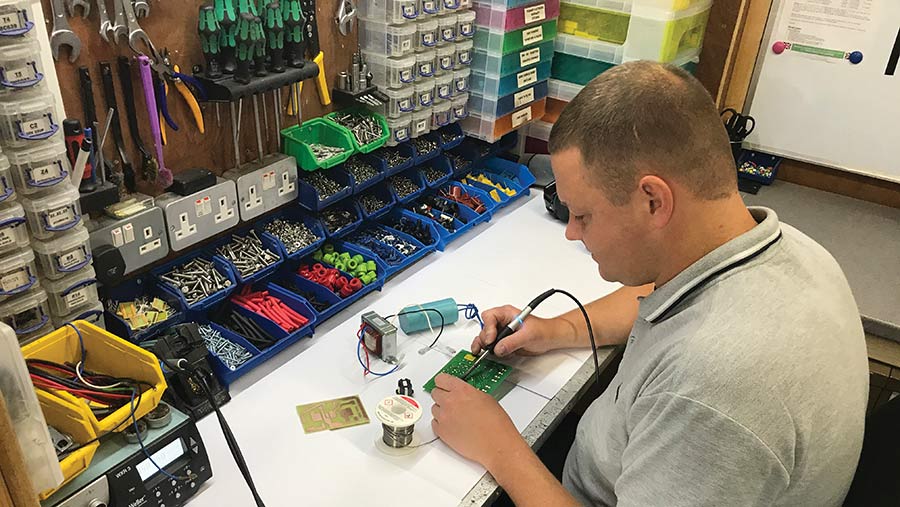 He finds older units are the simplest to repair, as they were hand-built with straightforward circuit boards that can have replacement components soldered in position. This makes them infinitely repairable and, as a result, they shouldn’t just be discarded when they go wrong.

Conversely, many modern units contain printed circuit boards, which have to be replaced as a whole. These can be hard to source and, in some cases, it is cheaper to buy another unit.

However, Hotline Electric Fencing, based in Newton Abbot, Devon, continues to hand-make its energisers in the UK, which means they’re still simple to fix, he says.

Mr Lange charges a flat rate of £69.99 to repair and refurbish battery energisers and £89.99 for mains units, including courier collection, return, new leads and crocodile clips, plus a 12-month warranty.

A good earth is essential for getting decent performance from an energiser, whether it is solar powered or not. At £5-£10 each, earth rods are one of the cheapest components in a fencing setup, so it’s worth making sure there are an adequate number.

As a general rule, a 1m earth rod should be sufficient for 1J of fencer output, but dry or stony ground can need more. Watering the ground around the earth stake can improve its performance.

When using multiple earth stakes, they should be positioned at least 4m apart and kept away from other earthing systems. To further boost the quality of the grounding, a separate earth return wire can be run parallel to the fence, with regular connections to earth stakes.

For those that would prefer to source a manufacturer-assembled solar-assist setup or an integrated unit, there are plenty of options from a wide range of manufacturers. Below we’ve picked out a couple of examples. 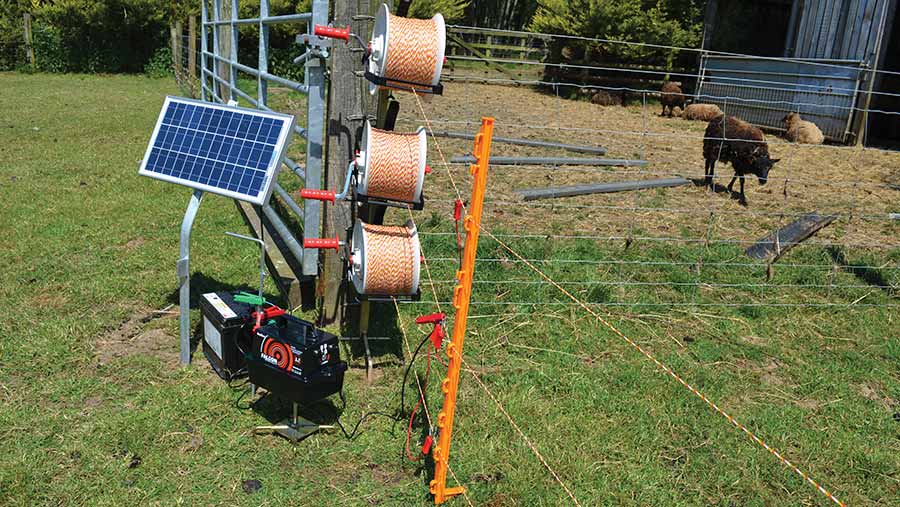 For those looking to fence larger areas, the 2.24J HBL Buzzard covers up to 25km of fencing. 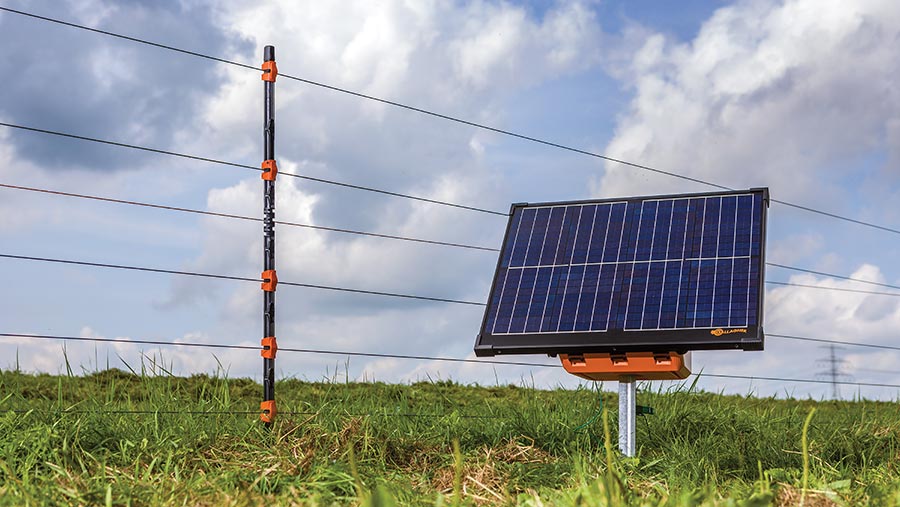 For shorter runs Gallagher also offers the S200, which can power up to 20km of fencing.